Evidence has surfaced on federal documents purportedly showing Gov. Ralph Torres and Rep. Angel Demapan solicited and received foreign campaign funds from China. These illegal campaign receipts are felonies according to the Federal Election Campaign Act of 1971, and the Bipartisan Campaign Reform Act of 2002.

If that federal statute citation reads familiar to you, this is why: It was among the statutes named in the return of warrant from the federal raids executed at the governor’s office and his home on November 7, 2019, about two-and-a-half years ago. Federal Bureau of Investigation agents simultaneously raided the legal offices of Imperial Pacific International (CNMI) LLC. Among the attorneys who worked for IPI at the time was Viola Alepuyo, one of Mr. Torres’s attorneys.

Documents from the federal raid that were leaked in the days following the raid revealed investigators were interested in the activities of the Chinese-owned casino, the governor, his brothers, and all but one of their wives.

A document leaked last night to Kandit, which purportedly is a conciliation agreement by and between the Federal Election Commission and IPI, shows the casino’s company allegedly has or will agree to pay a $15,000 fine for making a total $21,000 in foreign campaign donations to Mr. Torres and Mr. Demapan.

“The Commission found reason to believe that Imperial Pacific International Holdings violated 52 U.S.C. § 30121(a)(1)(A),” the leaked, though unsigned, document states. It states the FEC and IPI CNMI, “having participated in informal methods of conciliation, prior to a finding of probable cause to believe,” agreed on certain facts.

Though the purported conciliation agreement is undated and unsigned, two more documents leaked to Kandit show solicitation letters from the campaigns of Torres and Demapan, the signed payment vouchers from IPI, and even the check IPI purportedly wrote to Demapan’s 2016 campaign.

“Your contribution will not only help Rep. Demapan win, it will also help him push for sound policies, more jobs, better healthcare services, and most importantly, a stronger future for all,” an August 10, 2016 solicitation letter to the Chinese company from now-Rep. Roy Ada states on Mr. Demapan’s campaign letterhead. In fact, the Demapan solicitation letter left the door open for the very reason Congress outlawed donations as foreign interference in United States elections: “By becoming a supporter,” the Demapan solicitation letter states, “you become an important part of the political process.”

The letter was written to Ms. Alepuyo in her capacity as senior vice president for the legal department at IPI.

A year earlier, Ms. Alepuyo – writing as chairwoman of the campaign committee ‘Friends of the Governor,’ – solicited $10,000 from IPI chief services officer Tao Xing. A July 24, 2017 email purportedly from Mr. Xing grants his approval for the donation, which was made the next day, according to the IPI payment voucher.

You may view all these documents below: 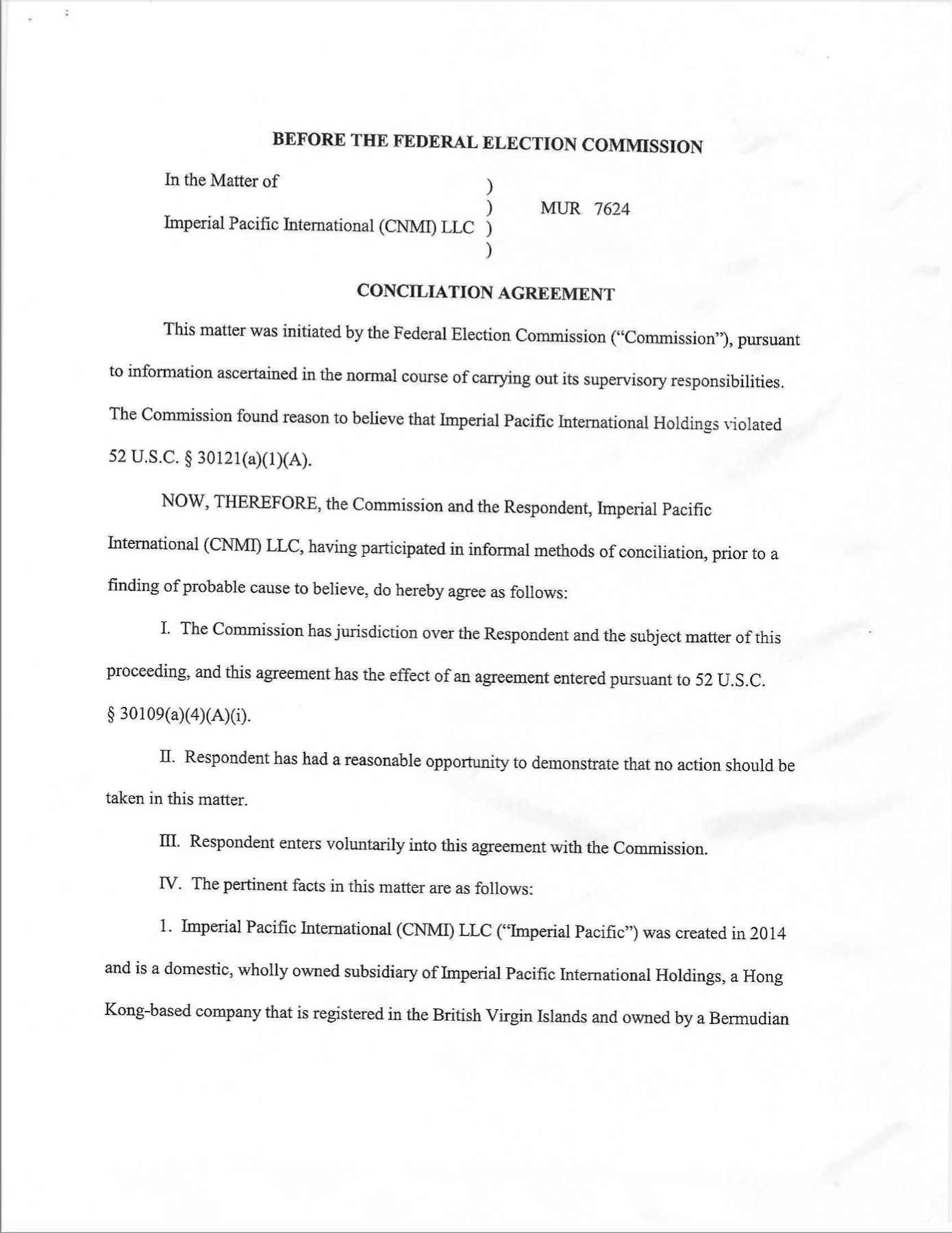 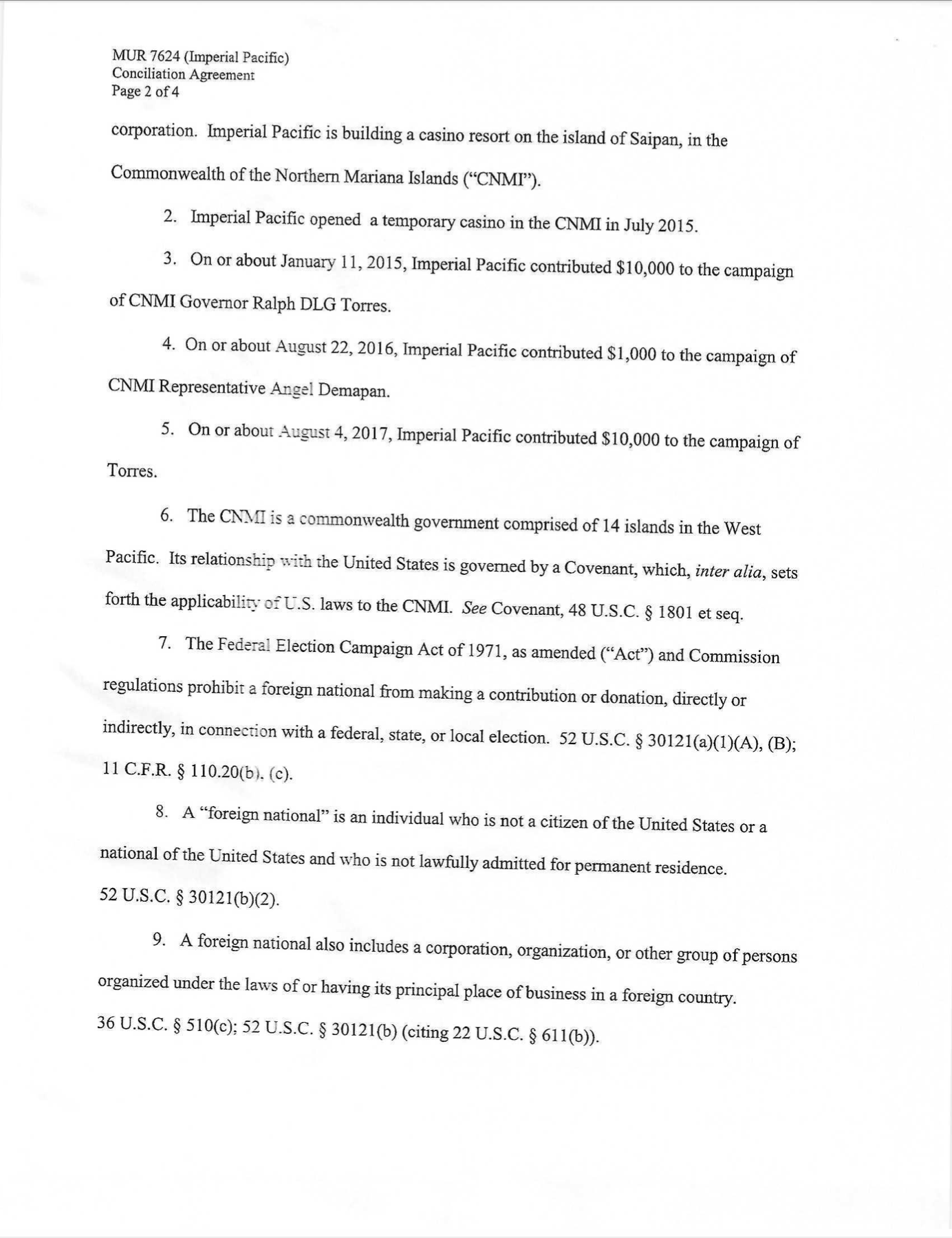 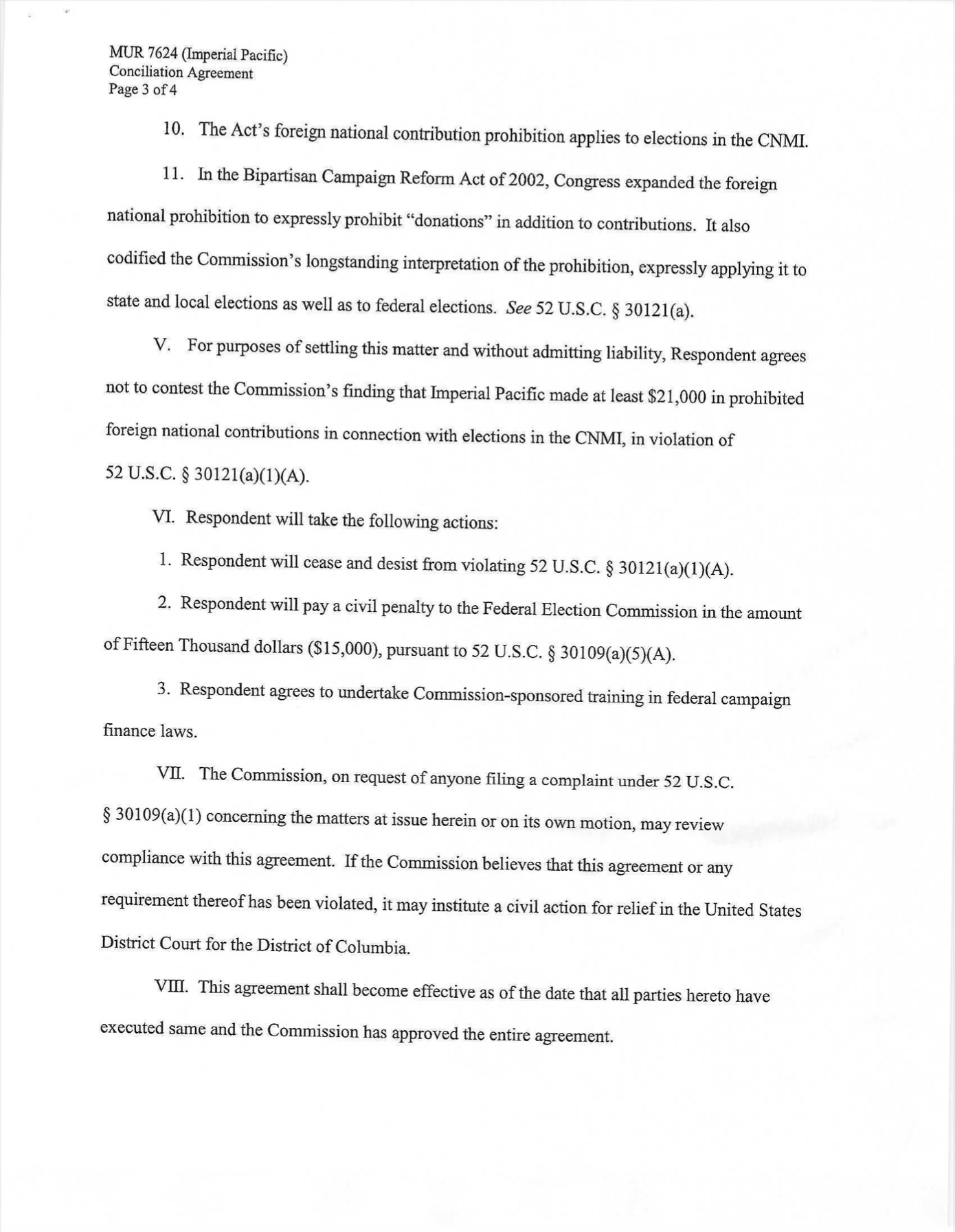 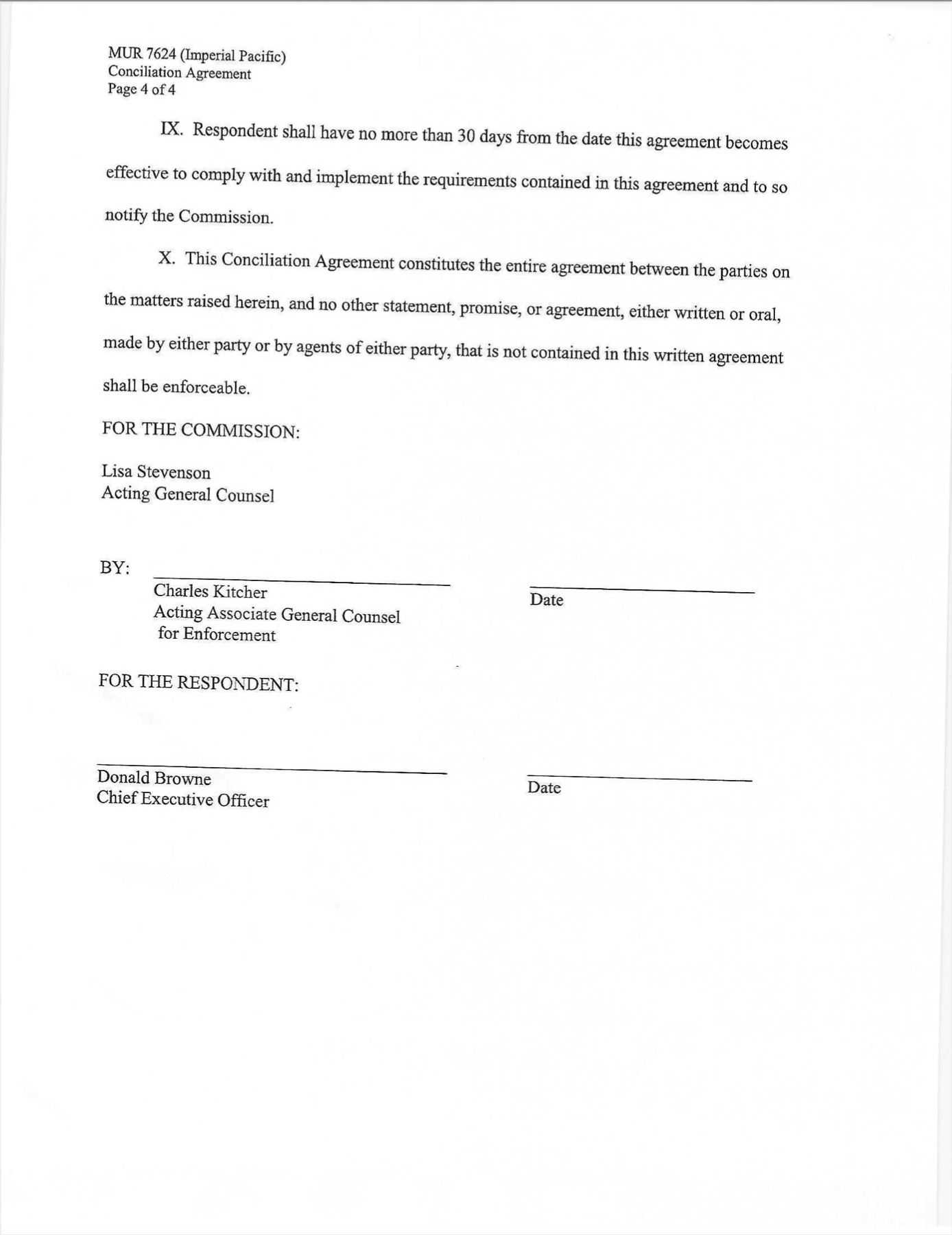 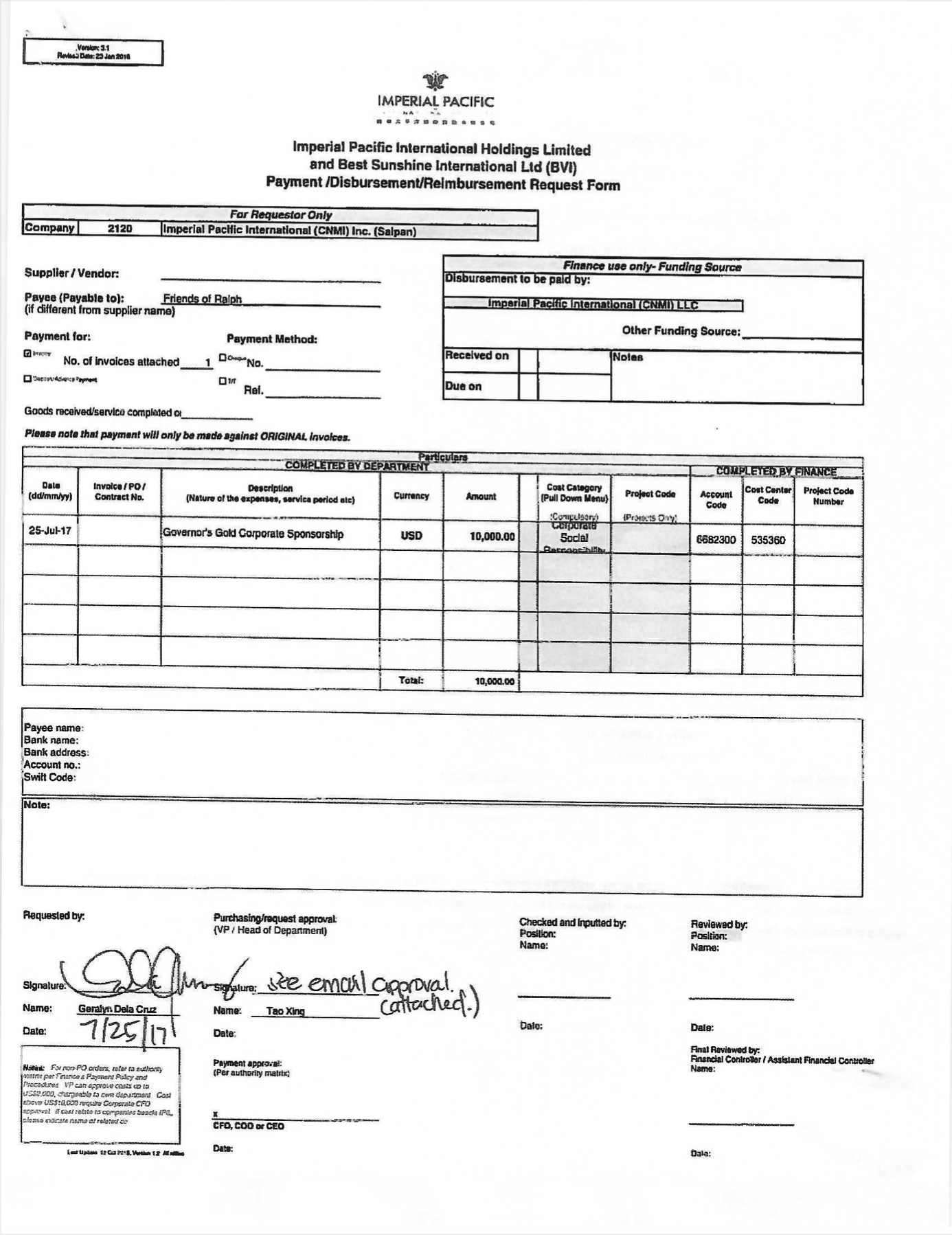 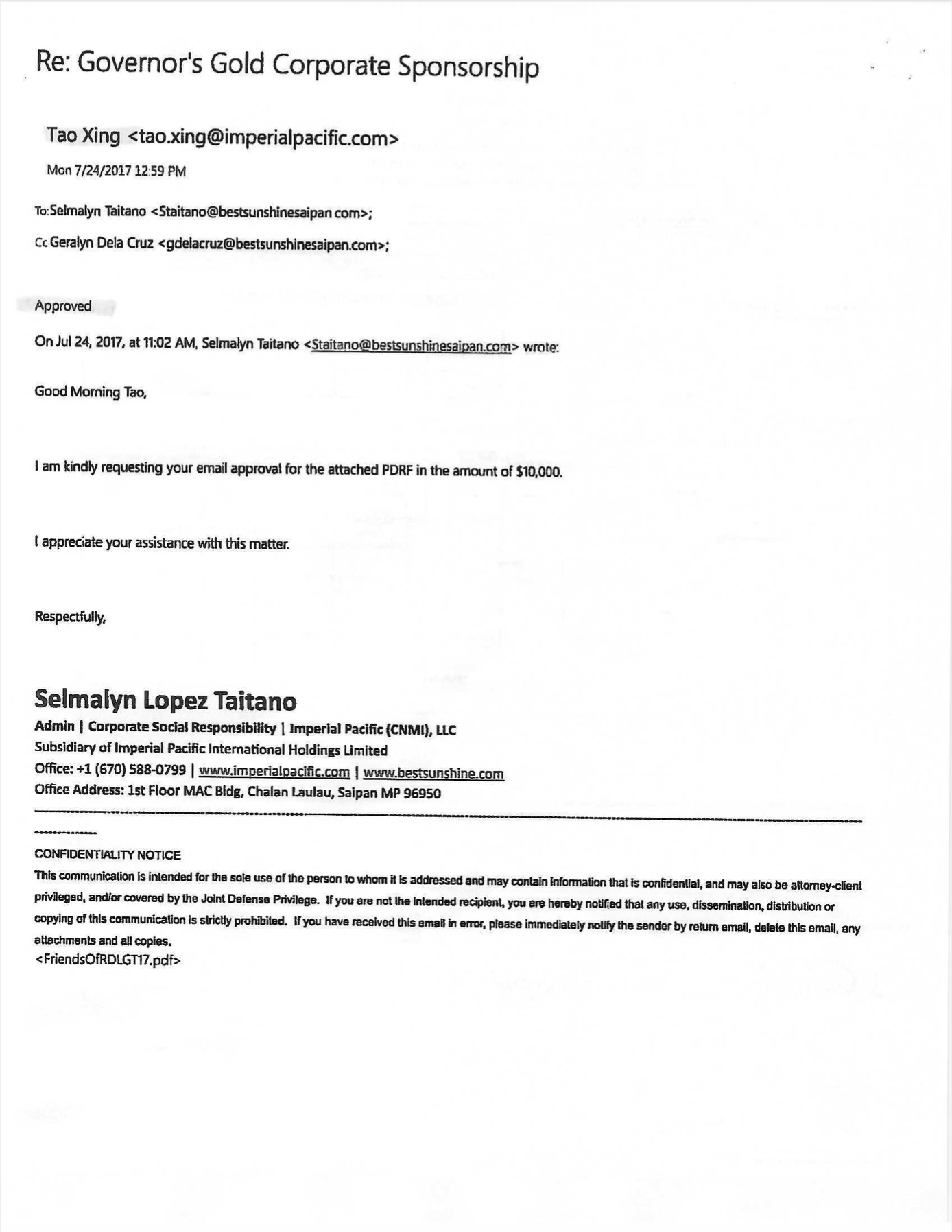 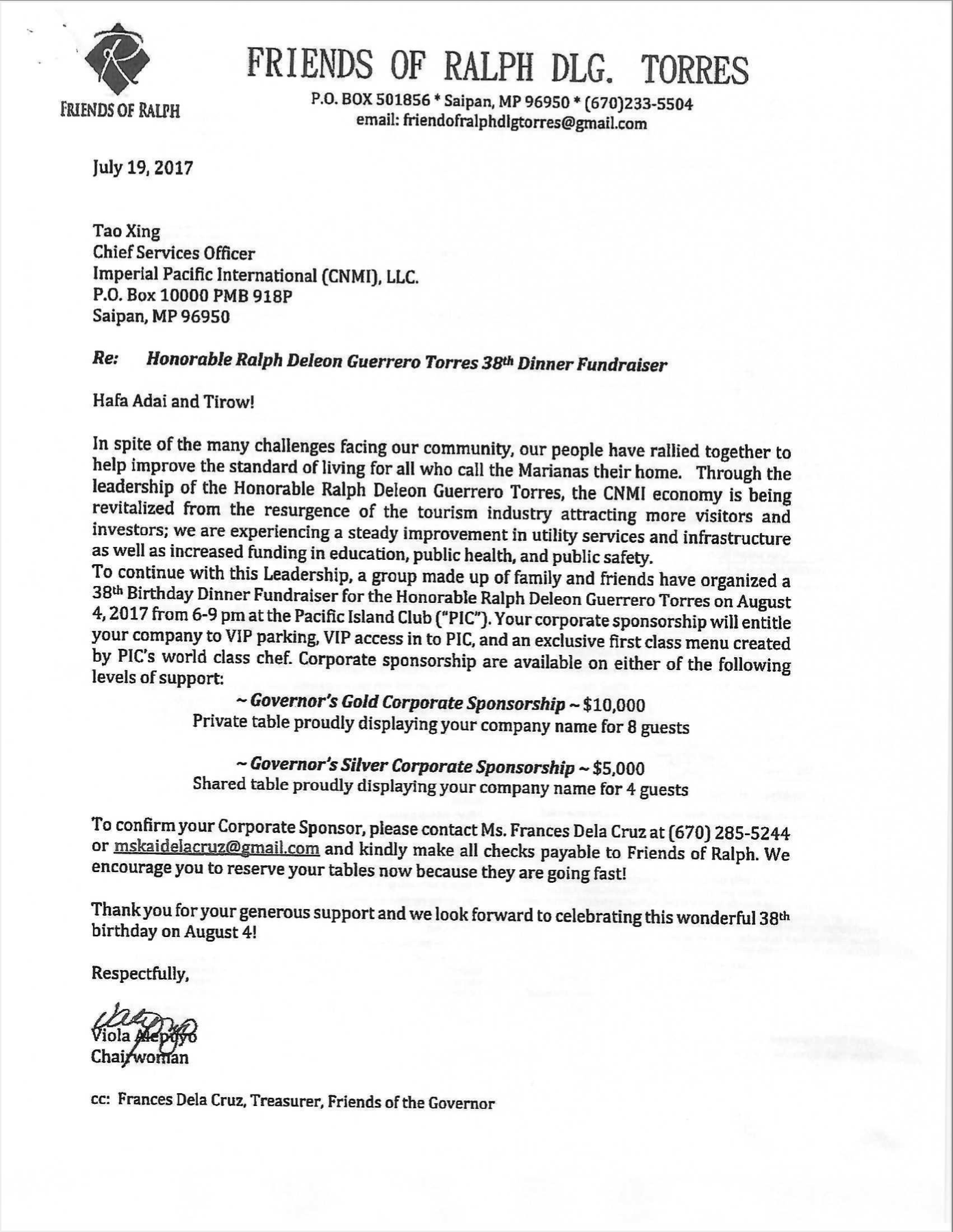 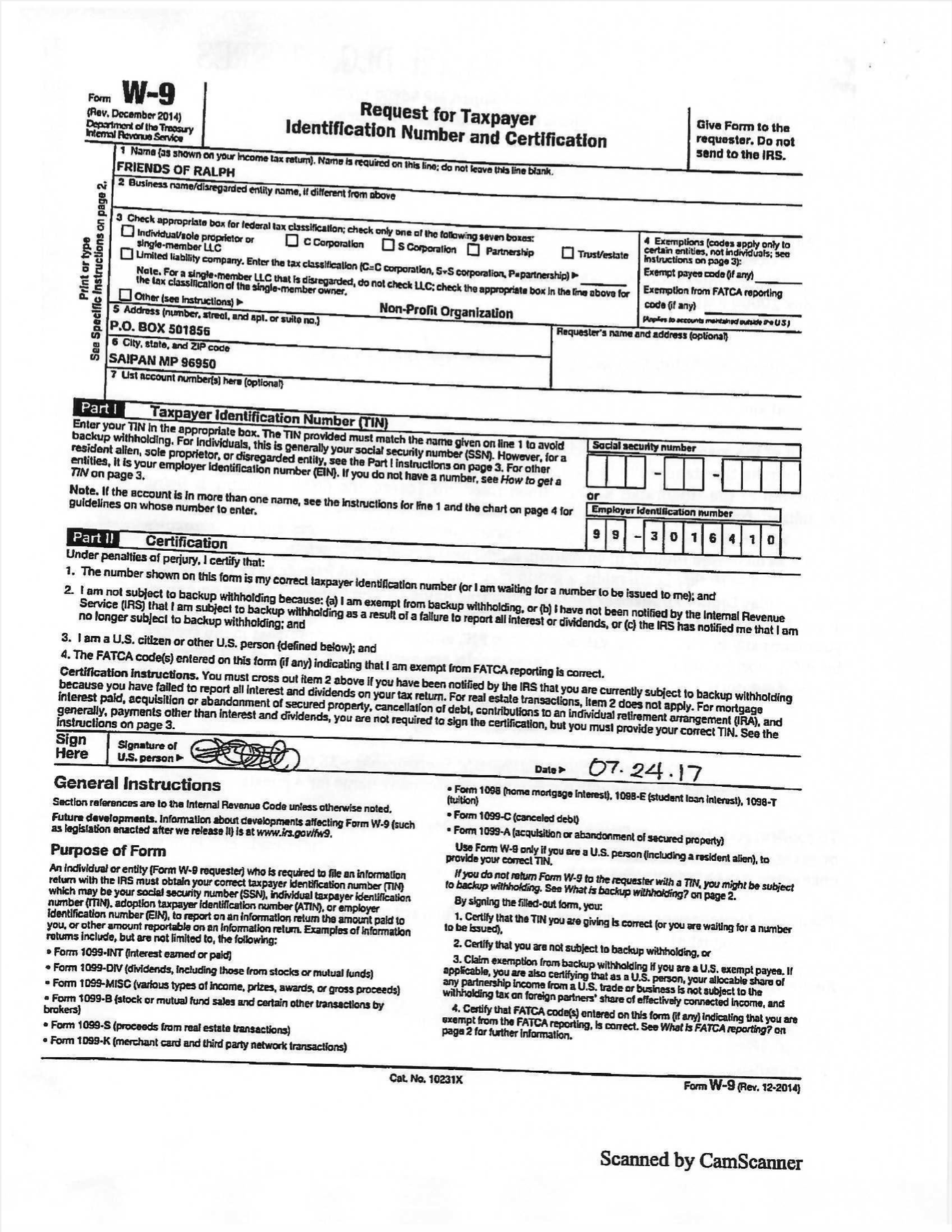 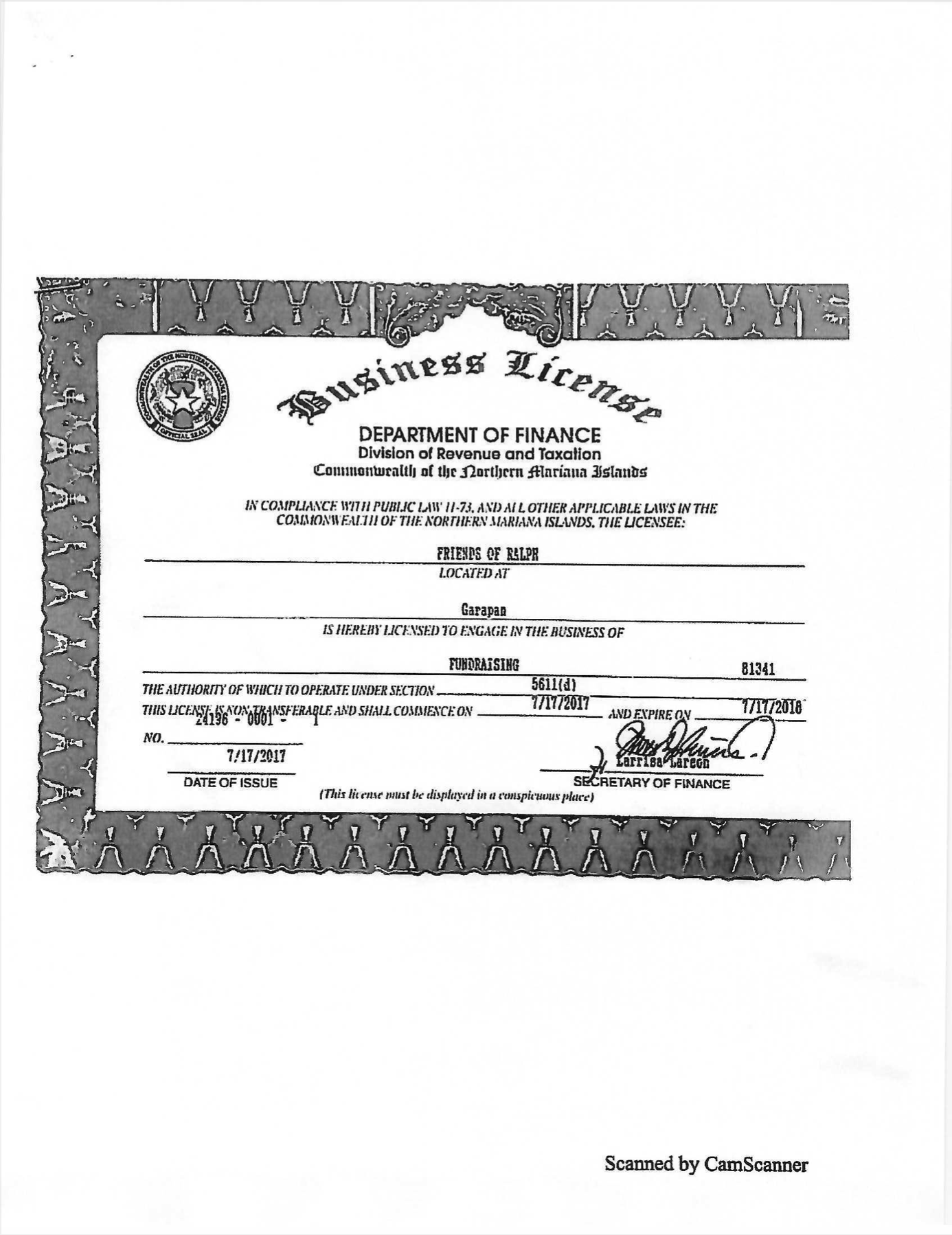 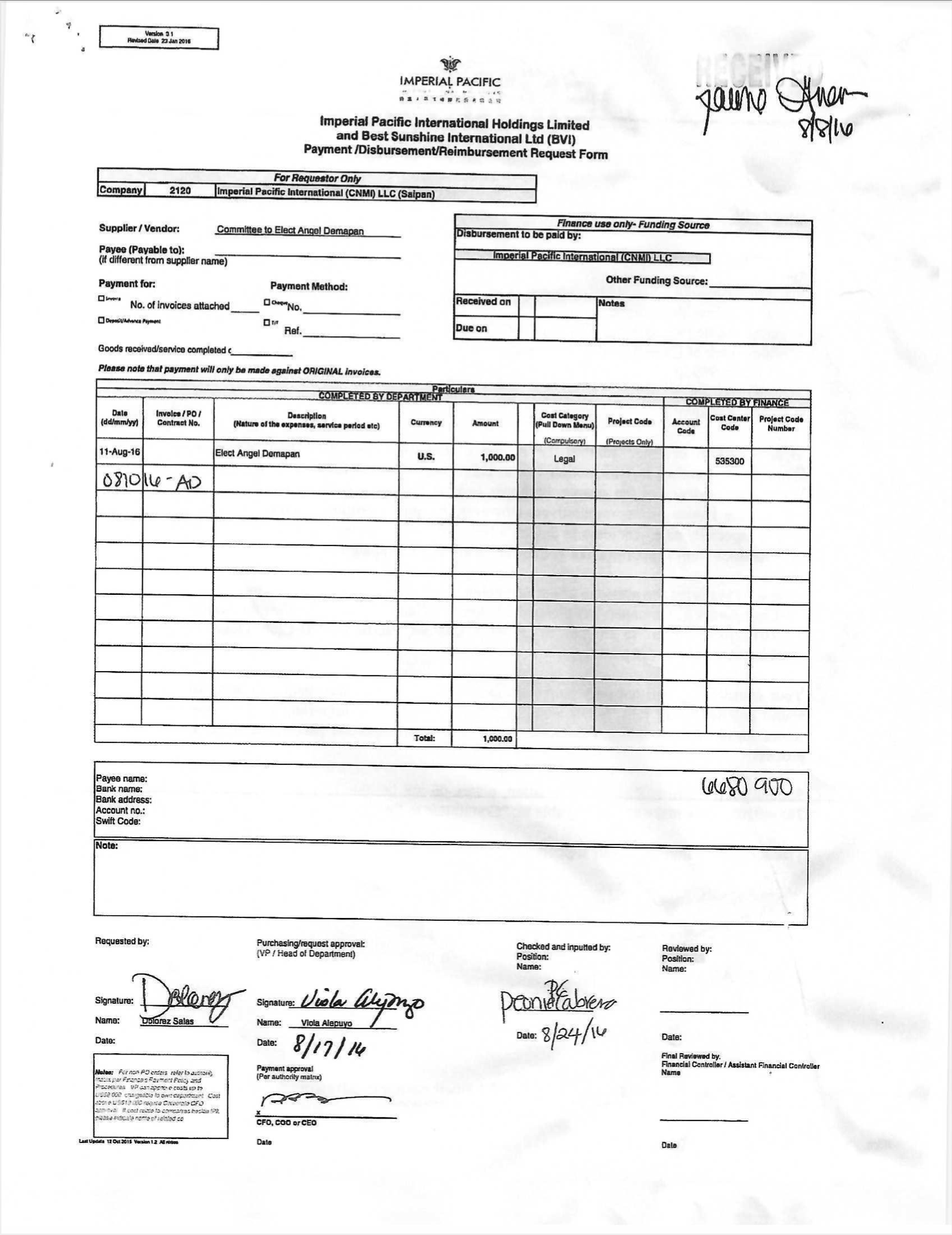 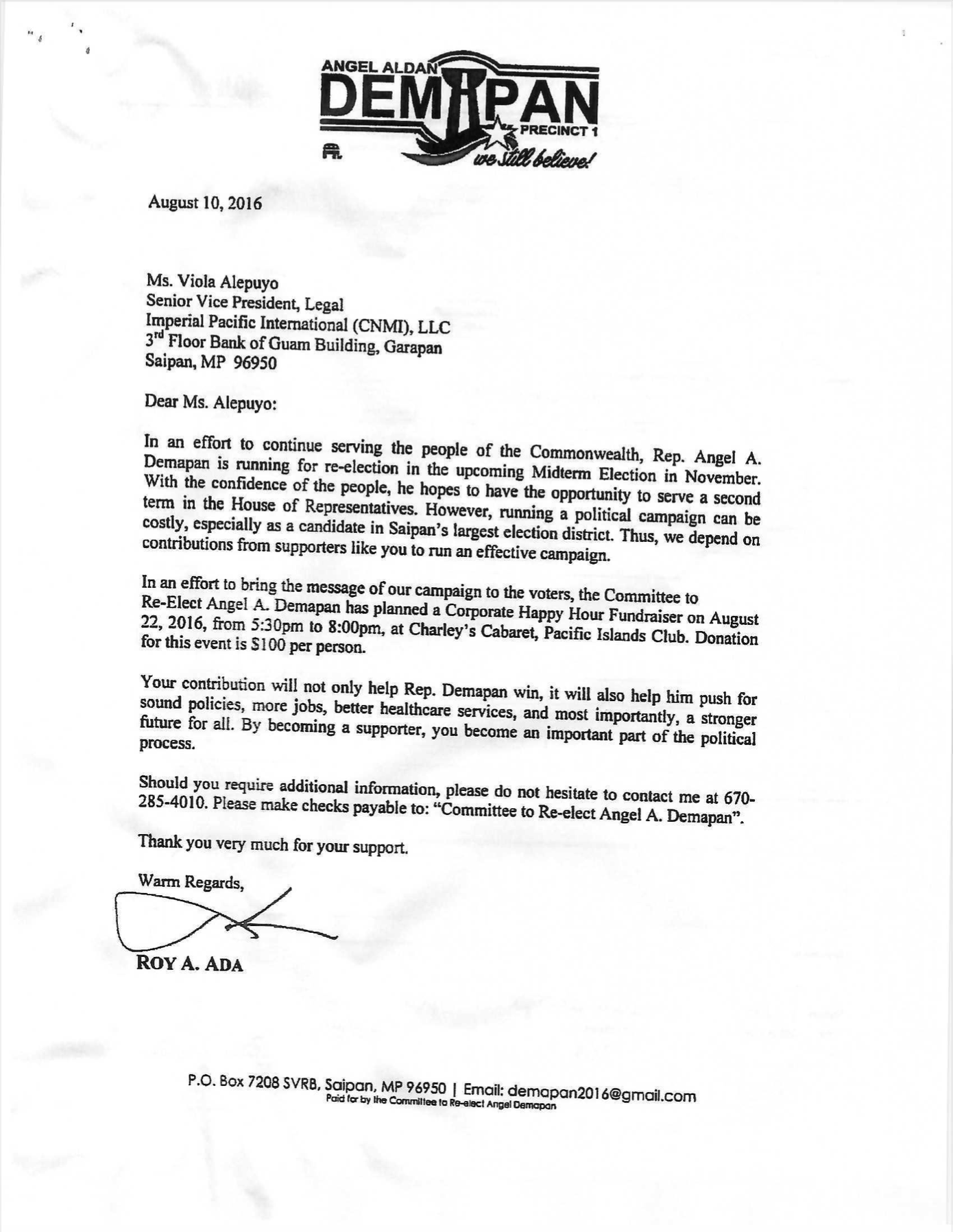 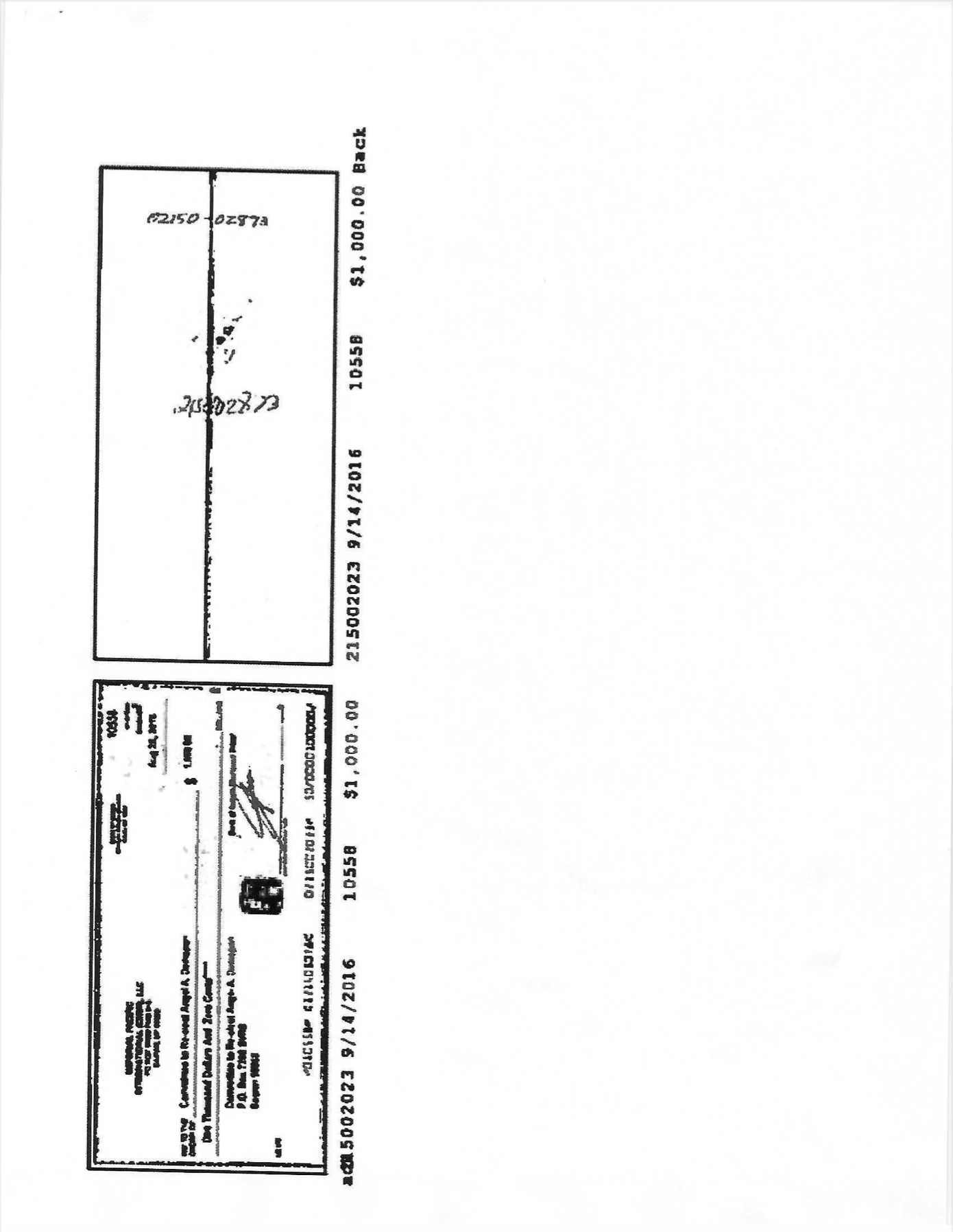