Home >> Governor caught in yet another lie

Governor caught in yet another lie

Gov. Ralph Torres last month told a Saipan Tribune reporter his budget request did not include any pay raises for his cabinet members using federal funds.

“I think that’s another misleading information,” Mr. Torres began explaining to the Tribune’s Ferdie Dela Torre following the reporter’s question about the revelation of cabinet pay raises in his budget submission. “There is no cabinet members that’s been raised through ARPA funds, so I don’t think it’s appropriate to be making comments when it’s inaccurate.”

The governor was lying.

It was only days later, when CNMI Secretary of Finance David Atalig, Jr. confirmed the increases in pay for himself and other Torres administration officials using federal stimulus funds.

Mr. Atalig told the Guam Daily Post, “Many of the Cabinet members have salary that is capped based on public law. We cannot use ARPA for pay raises if not authorized by the Legislature.”

According to the budget submission, several of Mr. Torres’s closest cronies will receive  five-digit annual pay increases if the Legislature approves his budget proposal. The markups were hidden on a spreadsheet on pages 403 and 404 of the budget.

CNMI Commissioner of Public Safety, Robert Guerrero, will be getting a $21,000 pay raise come October 1, as proposed. His colleague, Mr. Atalig, will get a $30,000 pay raise. Another 68 members of the governor’s cabinet and staff will receive similar four- and five-digit pay raises.

The Secretary of Labor, Vicky Benavente, who has been widely criticized for her poor performance in getting unemployment money to its rightful recipients, is slated to receive an $11,174 pay raise. Robert Hunter, the governor’s senior policy advisor, will get a $10,174 pay raise. His wife, Armi Hunter, recently received a nearly $19,000 pay raise.

The governor’s spokesman and public information officer, Kevin Bautista, will be getting a $9,000 pay raise.

Fire commissioner Dennis Mendiola will be getting a $21,000 pay raise.

Yvette Sablan, the governor’s special assistant for substance abuse and rehabilitation, will be getting a $10,001 pay raise. Her brother recently was hired at the Governor’s Office.

You may view the full list of pay raises below.

Congressman Ed Propst said in a live stream August 12 that the Democrats proposed to give each adult resident of the Commonwealth a $1,000 stimulus payment using the ARPA direct aid funds, of which Gov. Torres is in unilateral control of more than $500 million. Mr. Propst lamented the governor turned down the idea and is now spending the money on obligations for the few rather than the everyday people.

“Your government pisses away a lot of money each day on a lot of crap,” Mr. Propst said. “They act like it’s their own piggy bank. Yet when it comes to helping the regular people, all of a sudden it’s a bad idea to the Torres administration.” 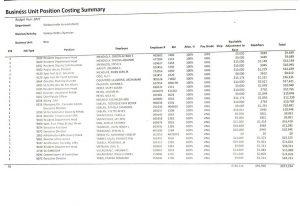 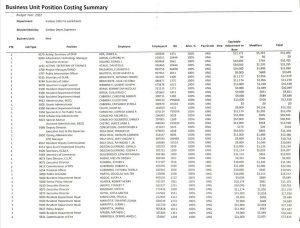