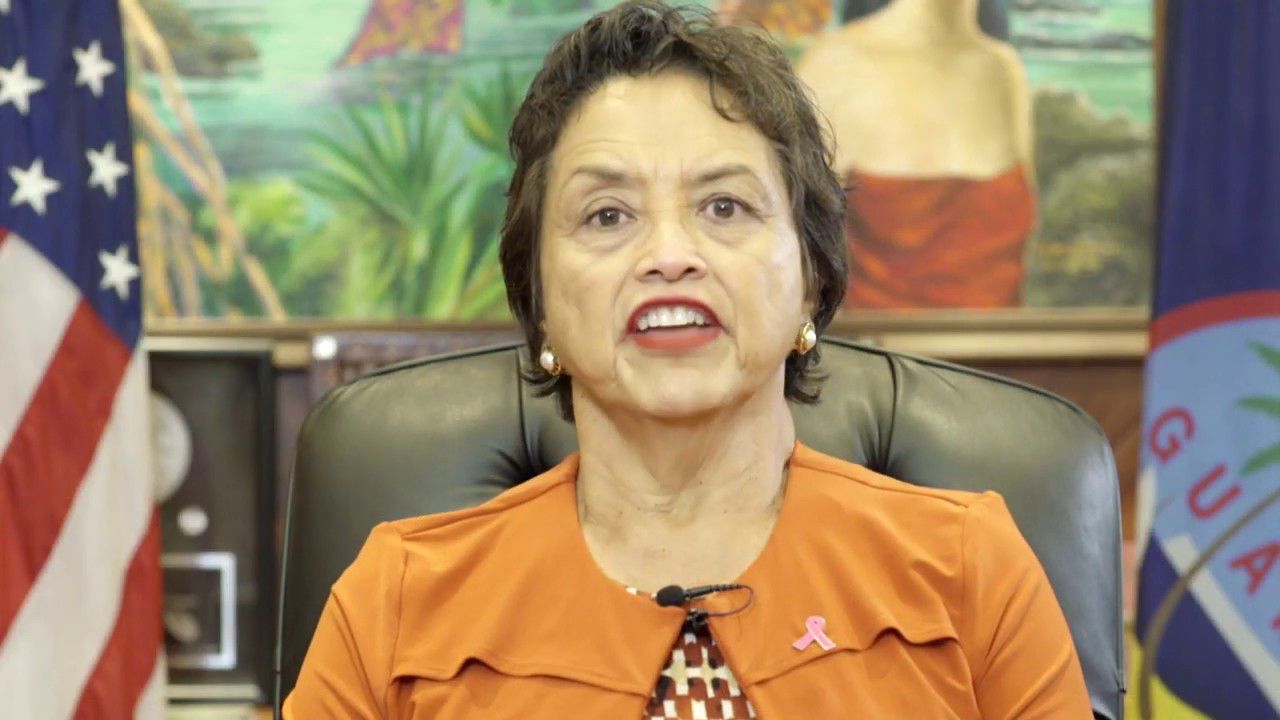 The maps tell a story. The land tells a story. If we care enough about what is coming of us – citizens of a piece of American Eden being priced out of our homeland – then we have to listen to the screams of injustices from a not-too-distant past, that become fainter with each passing day.

For 18 families, who once owned property along the back road to Andersen Air Force Base, whether they get back their land – for which evidence shows was taken without just compensation – is now a question of justice and, unfortunately, politics. But according to at least one of the 18 families’s records, GovGuam already quitclaimed its interest in land the governor is now saying she wants to take… without compensating them.

According to maps and documents, the U.S. Navy condemned the land after World War II  from: 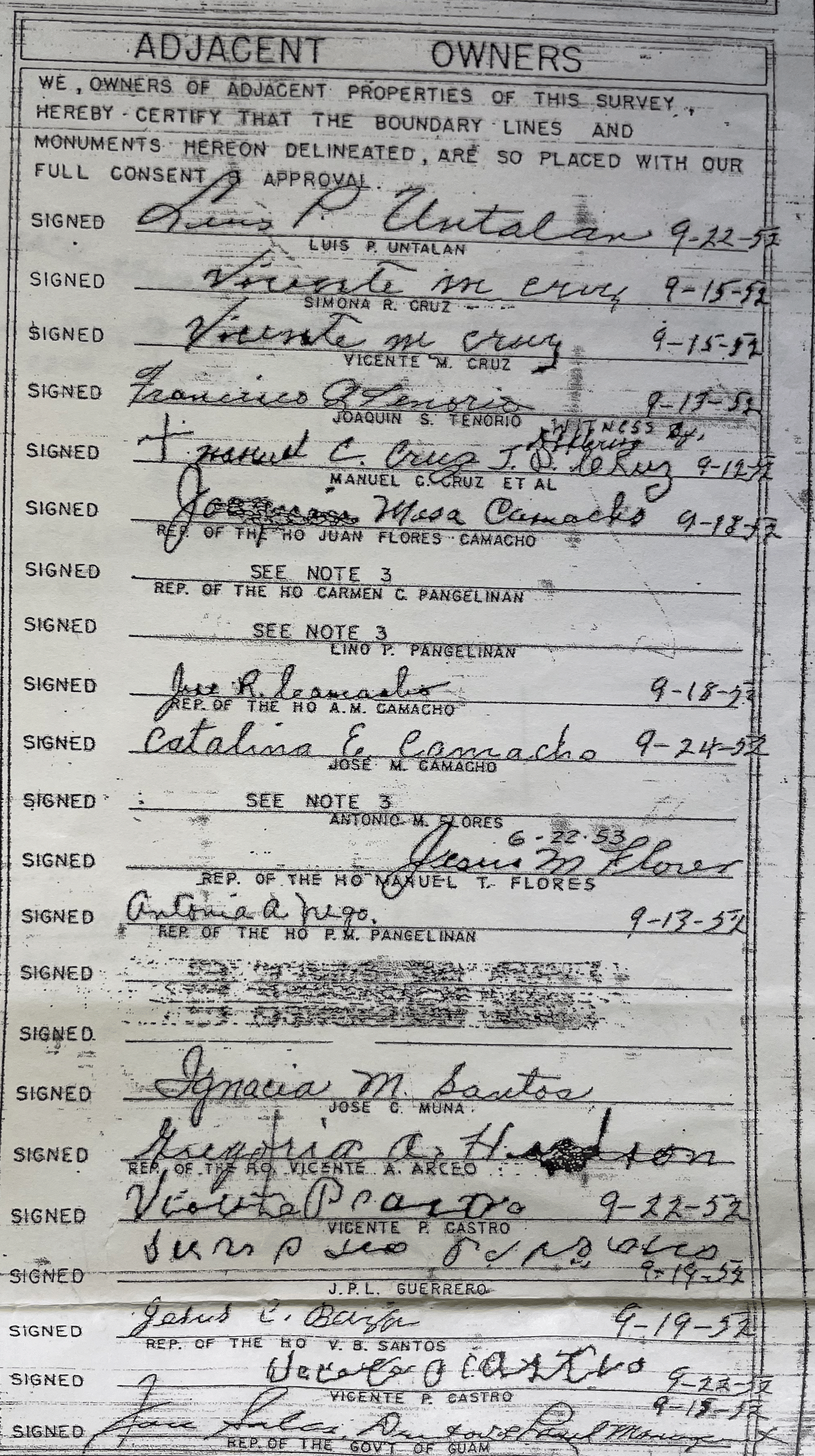 For at least one set of the original landowners, siblings Henry T. Flores and Margarita T. Flores Cabrera Pereira, the Navy paid them only six cents per square meter for the 1.2 million square meters of land taken from them. They were paid approximately $72,000, which would have the purchasing power of about $800,000 today, or far below fair market value for a piece of property that big fronting Route 15, and that close to the eastern shore.

Grievances from the heirs of the pre-condemnation owners of thousands of acres of land taken by the Navy range from the lack of just compensation to theft of property altogether. The Guam Legislature in 1999 summarized these grievances in Public Law 25-45, which created the process for ancestral land owners to claim property the Navy had taken, and then for GovGuam to quitclaim the property once the Navy declares it excess and Congress returns it.

For the 18 families in Mangilao, their day for justice was fast approaching as of January this year, when Navy Secretary Kenneth Braithwaite wrote to Gov. Lou Leon Guerrero telling her he intended to have the lands declared excess.

But the governor had other plans. And the Navy went along with it.

Rather than accepting the declaration and moving forward with the legal process of having the land returned to the heirs of the original owners, the governor said she began working with the Navy to lease the property from the Navy for 100 years. She wants the site to be used for the construction of a $1 billion medical campus, to include the new hospital to replace Guam Memorial Hospital in Tamuning. Her administration is moving forward with these plans despite the availability and designation of Oka Point for the medical campus.

There’s a problem, though; and one that will be brought up by Ms. Pereira’s son, Vince Cabrera, at an oversight hearing Speaker Therese Terlaje called regarding this land dispute this coming Thursday:

GovGuam already quitclaimed the lands to the original land owners and their heirs. 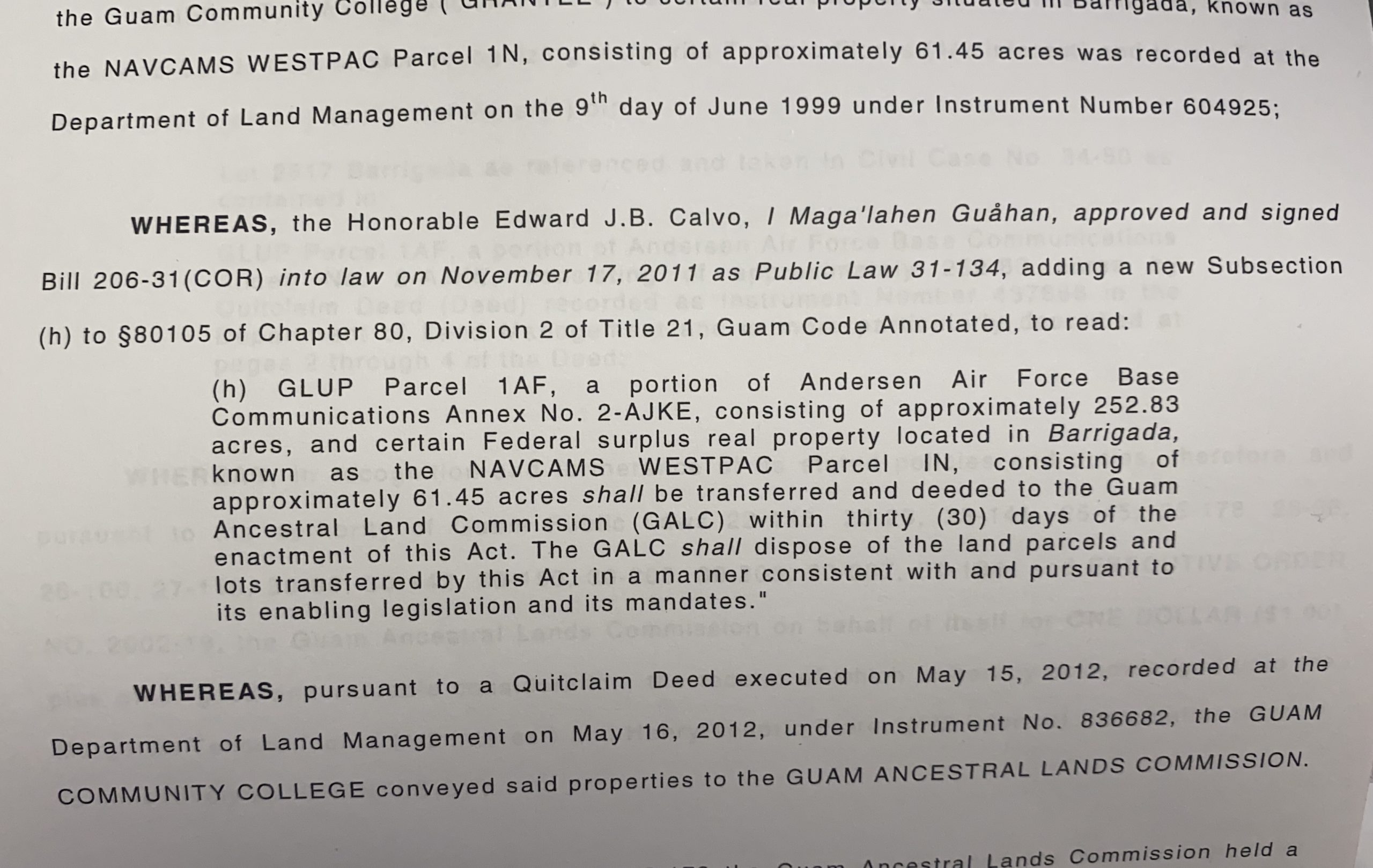 The late Speaker Ben Pangelinan on November 8, 2011, convinced the Thirty-first Guam Legislature to pass his legislation that transferred the Eagles Field lots to the Guam Ancestral Lands Commission within 30 days of the enactment of the bill. That enactment happened on November 17, 2011, when then-Gov. Eddie Calvo signed what became Public Law 31-134.

“It has been more than 64 years that these families have had to endure the perpetual injustices imposed upon them by the land taking, and further exacerbated by never being appropriately compensated for their loss,” P.L. 31-134 states.

In the public hearing on the legislation, which occurred on September 30, 2011, one of the ancestral land owners, John T. Flores, said “This bill has brought back a lot of animosity as well as gratitude that there is hope that we may one day be able to afford our children the opportunity to build a roof over their heads because we are certainly capable of making that decision and the fact that this has dragged on for many years. We started losing hope and we started thinking that maybe this would not happen. There are so many in our families that are still struggling today and if we can get this thing taken care of, there might be relief of not affording to build a roof over their head.”

It did happen. Thanks to Mr. Pangelinan’s determination – literally to the end of his life – the families were, on paper, reunited with their lands.

On February 8, 2013, the speaker, who was dying of cancer at the time, was able to witness Mr. Calvo sign the quitclaim deed conveying the land, Lot 2517, to the Flores family and others.

Part of the quitclaim deed refers to the authority GovGuam had to deed that land to the Floreses. Among the laws cited was Public Law 23-23, which began as Bill No. 128 in the Twenty-third Guam Legislature in 1995. 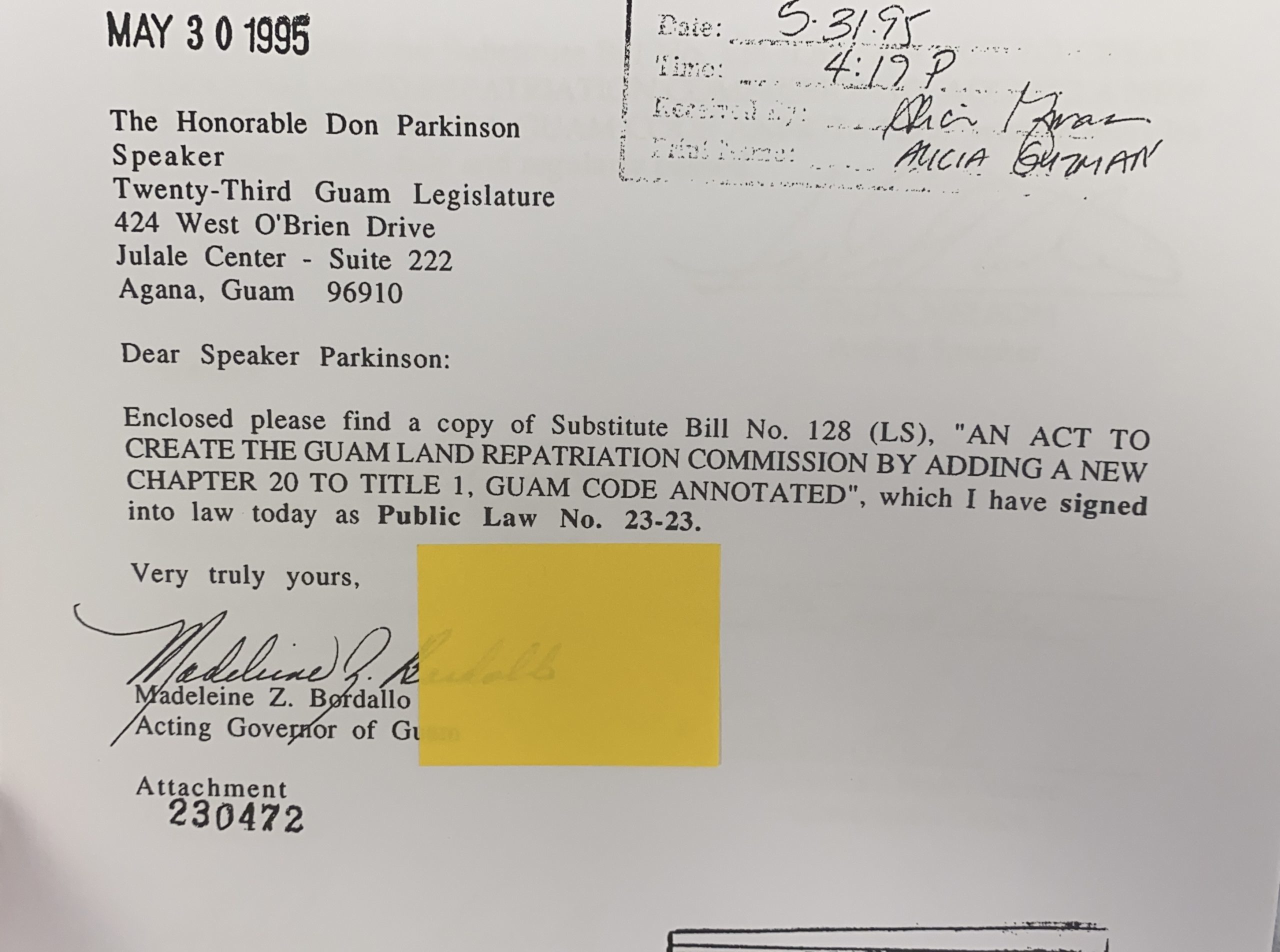 The law, which was signed by acting Gov. Madeleine Bordallo on May 30, 1995, created the Guam Land Repatriation Commission (the precursor to the GALC) to begin the process of returning ancestral lands. It also created the government’s “Policy with respect to original landowners.” The law states, “It is the policy of the government of Guam that land returned but the federal government to Guam be returned to the estates that held such property prior to the condemnations of said lands by the Federal Government.” 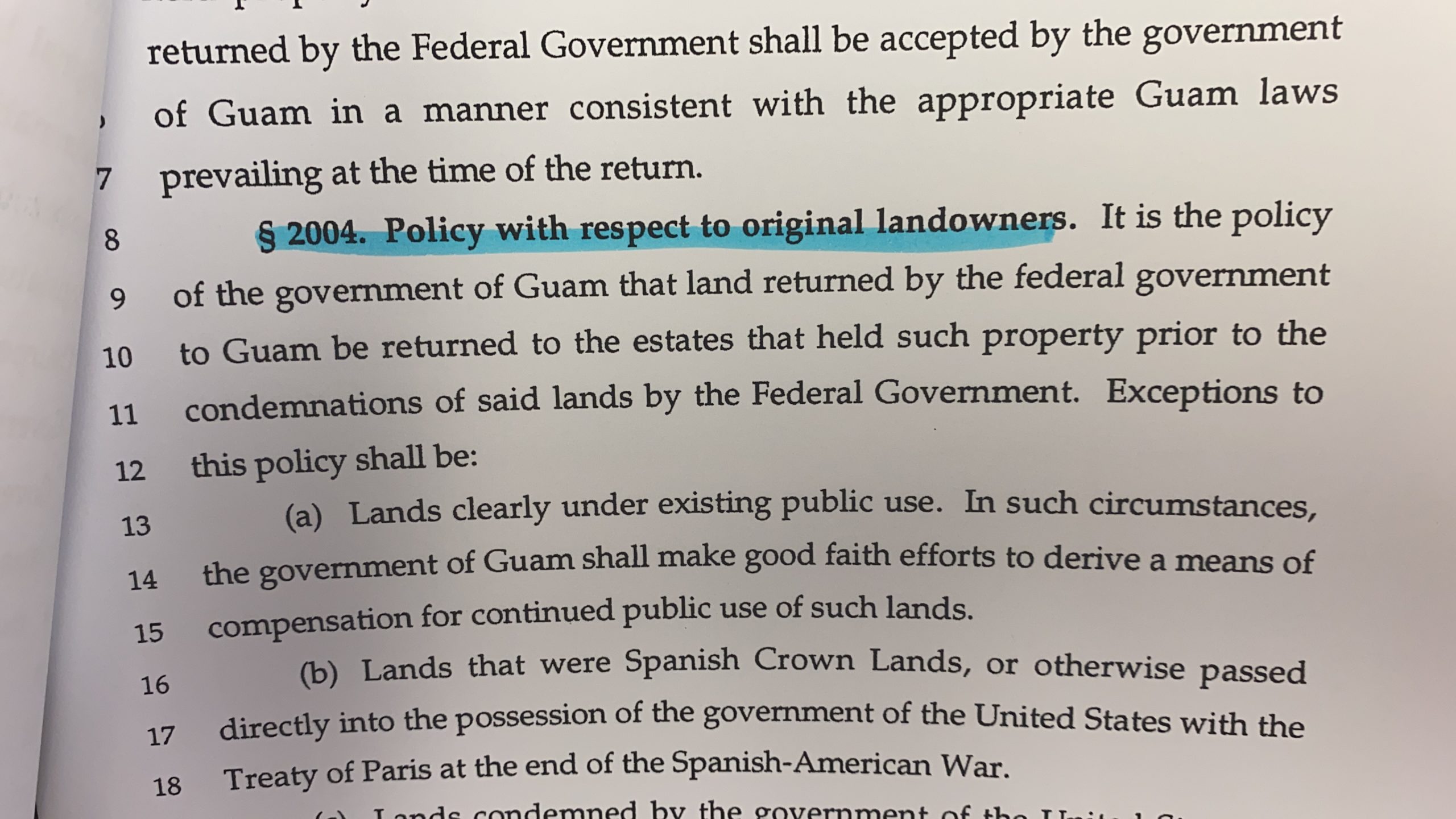 In the law’s findings and intent provisions, the Legislature stated it finds “that many areas are no longer required by the Federal Government for any legitimate use. Many of these areas have been vacant for decades and put to no discernible use at all.”

Among those areas are the backroad properties.

And among the authors of this law is then-Sen. Lou Leon Guerrero. She co-sponsored the statute, voted in favor of it, and was even a member of the oversight committee who voted to report it to the full legislature with a recommendation to pass it into law. 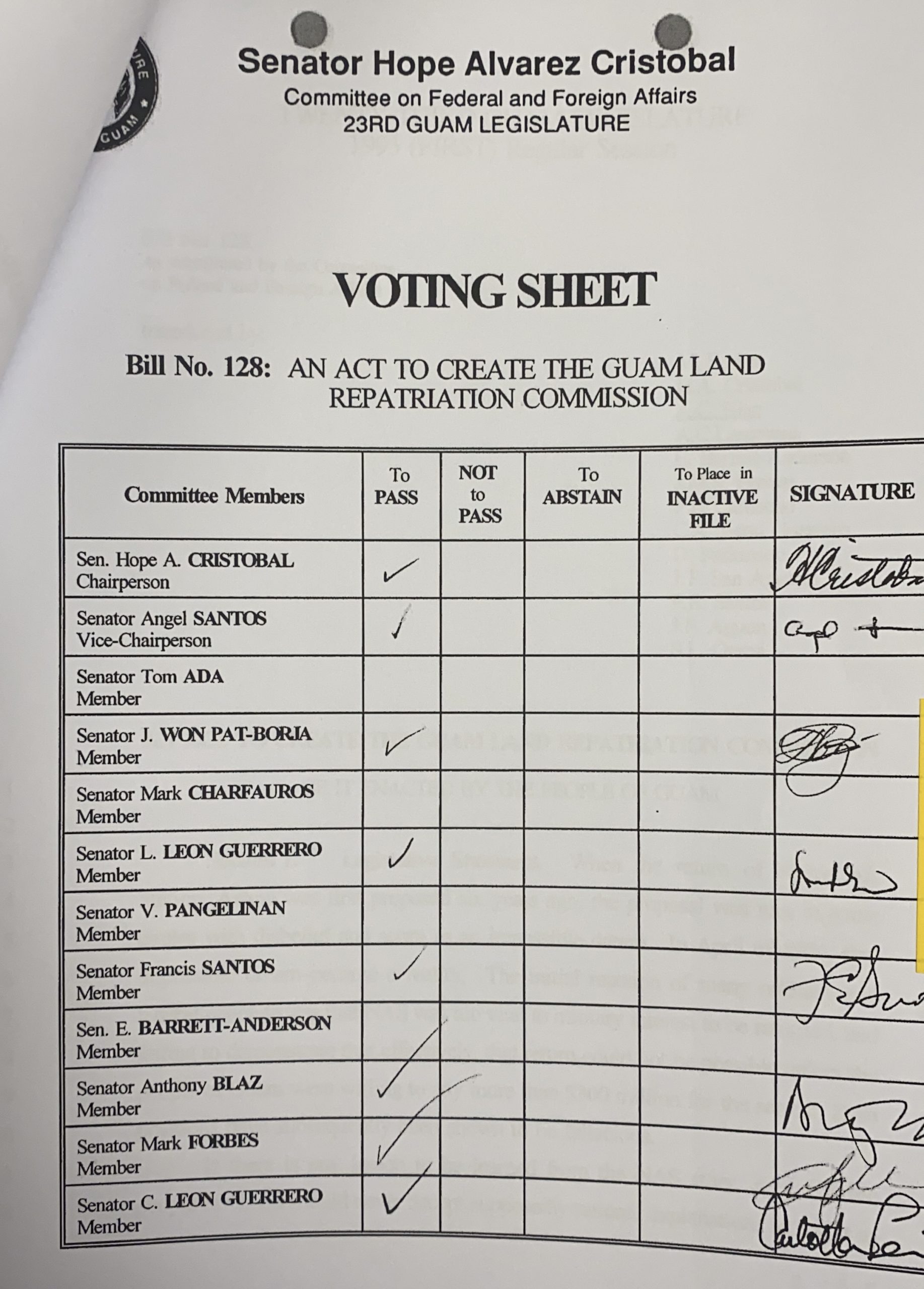 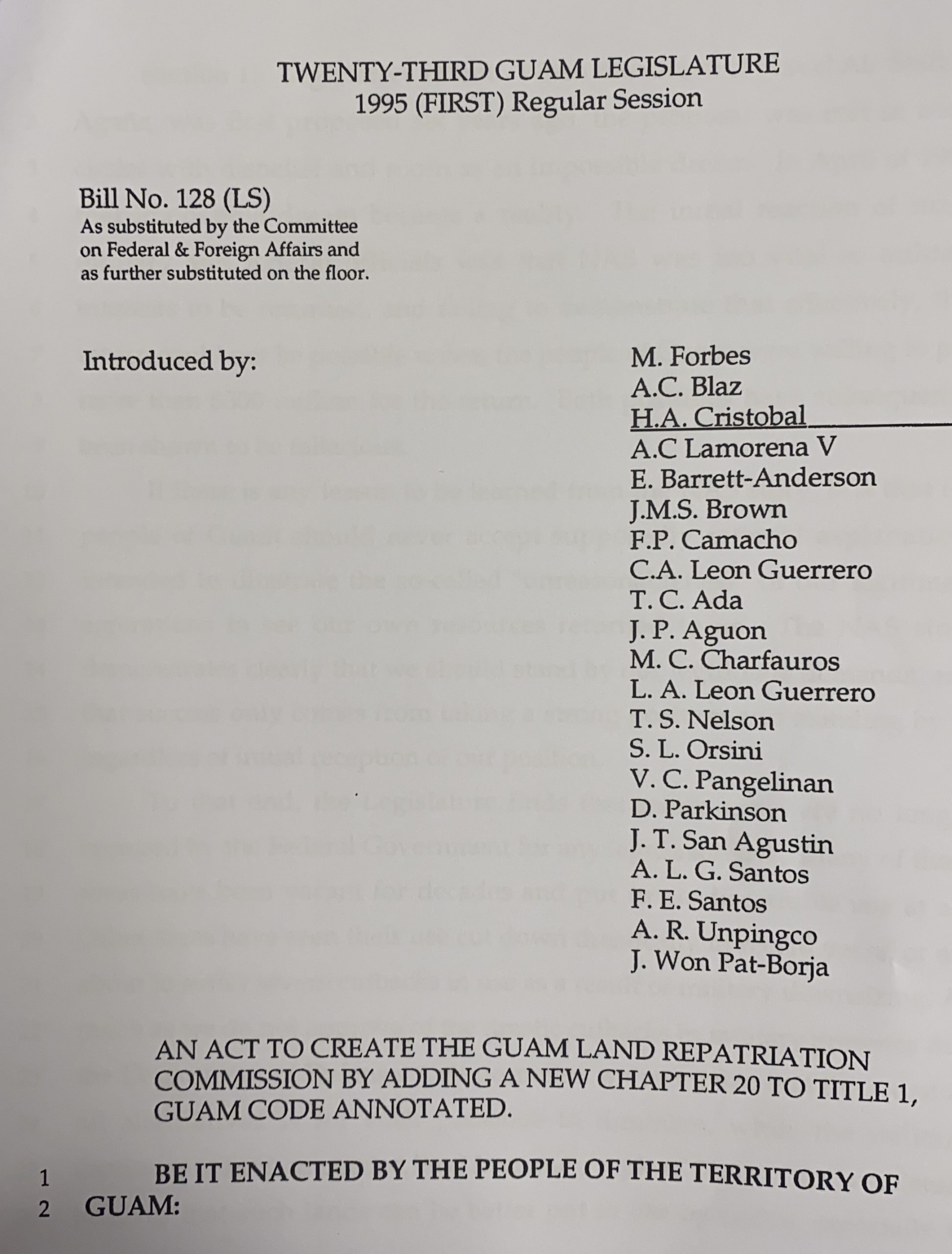