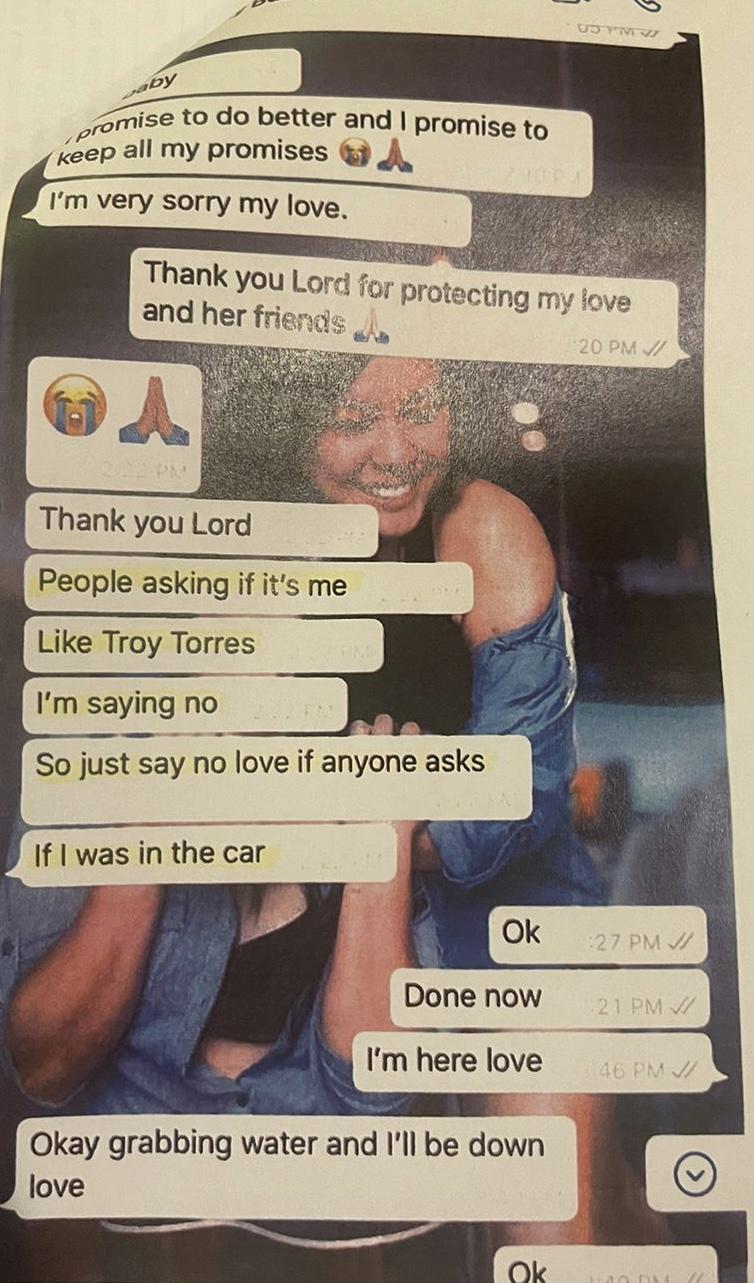 Guam Police Department officer Joneen Terlaje, the off-duty cop who was in the red Jeep that crashed into Jerry’s Kitchen in the early morning hours of February 25, 2021, allegedly sent messages following the crash asking people to deny she was at the scene of the crime.

WhatsApp messages allegedly from Ms. Terlaje to a friend of hers following the crash show the officer asking her friend to tell people she was not an occupant in the Jeep, if people ask.

Kandit has reached out to GPD chief of police Stephen Ignacio to ask whether GPD was aware of this during its second investigation of the scandal, and whether any conduct suggested obstruction of the police investigation, or possible witness tampering. Mr. Ignacio has not responded as of the publication of this story.

The scandal eventually led to charges filed against another occupant of the Jeep – Nakita Aguon – who currently is fighting the allegations against her in open court. Ms. Aguon, who could have accepted the charges and faced only hours behind bars as punishment for the misdemeanor charge against her, instead has mounted a defense based on a simple premise: she was not the driver of the Jeep that evening.

Police officers, who have already testified for the prosecution, have cracked under cross examination by defense attorney David Lujan, revealing that the original police response and the subsequent investigation of that response were inadequate. For instance, the lead investigator of the second investigation admitted to jurors that police never interviewed the lone eye witness to the crash – a G4S security guard stationed at the plaza, where Jerry’s Kitchen is located.

Police also have refused to turn over police notes of the incident and documents involving the conduct of the officers involved in the investigation.

Ms. Terlaje is scheduled to take the stand, when trial resumes Thursday before Superior Court of Guam Judge Alberto Tolentino.

The WhatsApp messages allegedly from Terlaje would not represent the first time there was an attempt to mislead the public about Ms. Terlaje’s involvement in the incident.

The Monday after the crash in 2021, Kandit posted the following story:

Sen. Jose “Pedo” Terlaje’s office told Kandit News Sunday that his granddaughter, Joneen Terlaje, who is a Guam police officer, was not a passenger in the now infamous red Jeep that destroyed Jerry’s Kitchen in Tamuning last Thursday morning. Kandit reported this, after receiving information from the senator’s assistant, Chris Carillo, that Ms. Terlaje denied her involvement.

On Monday, Kandit contacted Sen. Terlaje’s office, messaging questions and receiving answers in reply regarding rumors that police officer Joneen Terlaje was a passenger in the Jeep, and that she allegedly was part of the attempted coverup of the incident.

CARILLO: She was not involved in the crash

KANDIT: Was she present at the scene?

CARILLO: I didn’t ask. I can ask her.

KANDIT: May we please confirm this? Her name keeps coming up and I want to put this to rest.

CARILLO: I’ll ask, but if she wasn’t in the crash anything else shouldn’t matter. I already texted her.

CARILLO: I just spoke to her and I can confirm that she got a call that a friend of hers was in an accident and she went to the scene to make sure her friend was not injured. 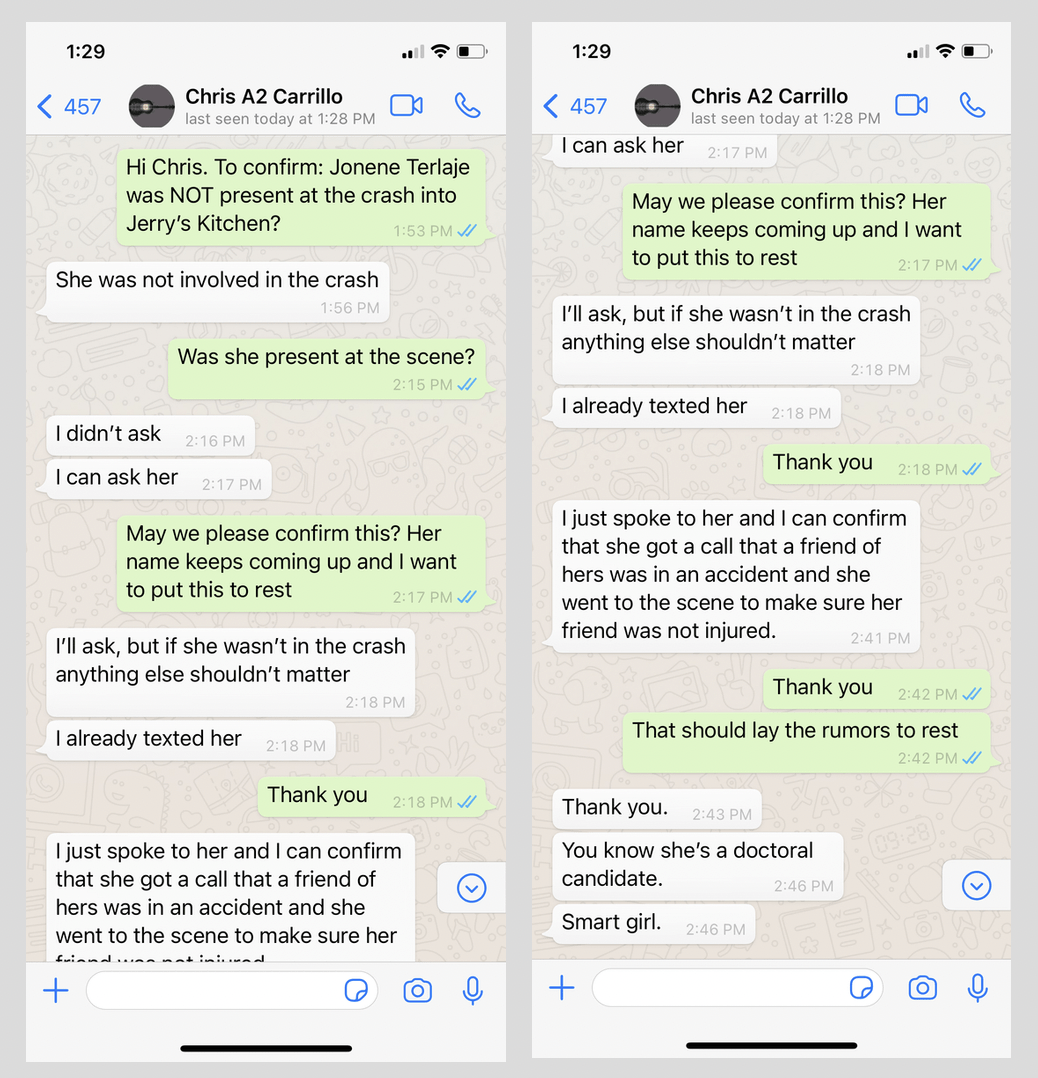 Kandit published these statements, along with Mr. Carillo’s assertion of an alibi for Ms. Terlaje the night of the crash: “She was driving her jeep that night I seen her. Her jeep is silver or gray. Yea it’s silver I looked on her Instagram.”

Despite these official comments from the Office of Sen. Terlaje about his granddaughter, Sen. Terlaje’s son, Joshua Terlaje, on Monday night and through his Facebook alias Jonas Perez, said that his niece was a passenger in that crash, directly contradicting his father’s office’s official comment.

“[T]he whole senators (sic) granddaughter story has nothing to do with it[,] all she was is (sic) a passenger in a (sic) auto accident,” Joshua Terlaje wrote in a comment that he has since deleted. David Lubofsky, a Kandit editorial contributor, saved the comment, which also shows Mr. Terlaje’s personal knowledge of the incident: 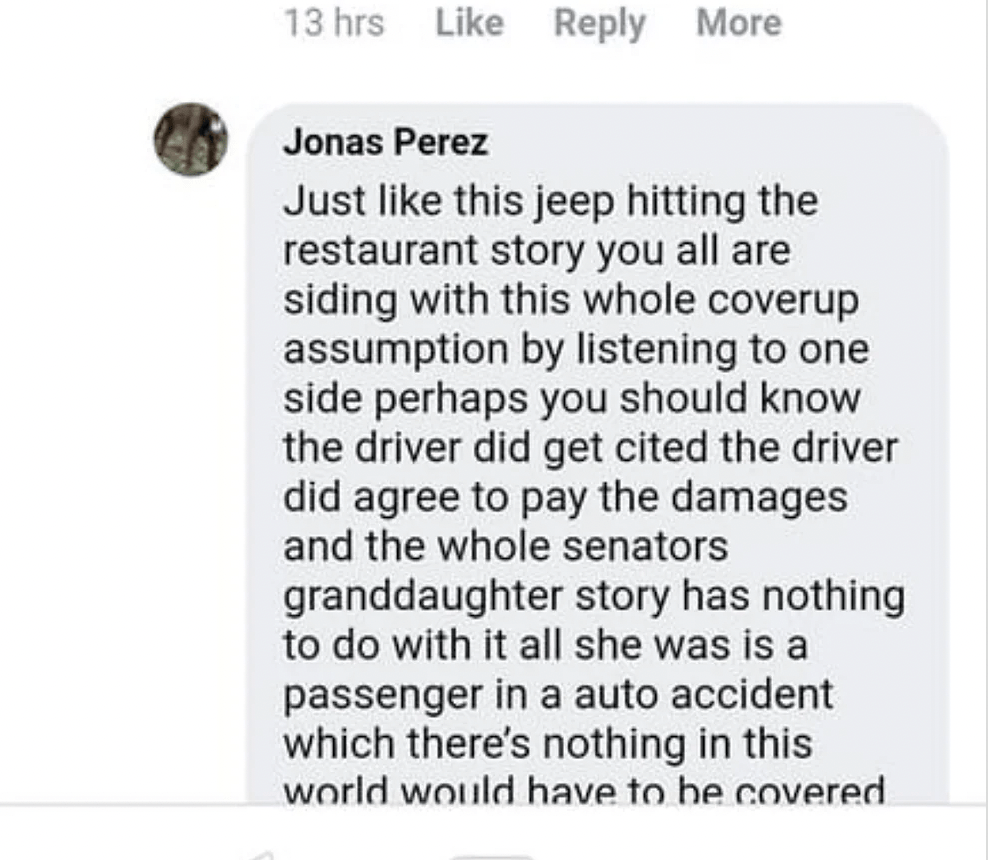 Today we circled back to Mr. Carillo to ask whether he lied to the public, or whether his boss’s son, Joshua Terlaje, was lying. Carillo said he didn’t lie and said the information he relayed to Kandit came from police officer Joneen Terlaje herself, insinuating she had lied.

KANDIT: Can you please explain to me why you told me she wasn’t a passenger in the crash, yet her Uncle Josh says she was? Which one of you is lying?

CARILLO: That’s the information I was provided, I’m always straight with you. I’m not saying anyone is lying, I’m saying that’s what I understood.

CARILLO: Like I said troy, I told u what I was told.

The Guam Police Department has remained tight-lipped about this and several other details. To add an extra twist to this story, Sen. Terlaje is the oversight chairman for GPD.

Police spokesman Sgt. Paul Tapao told reporters the morning of the crash that it had been classified as “Auto ran off roadway, with no injuries and no arrest made for driving while intoxicated.

On Tuesday, Mr. Tapao said the responding officer, Chris Champion, decided not to arrest the driver of the Jeep, and instead issued the unnamed female a citation from imprudent driving. According to Mr. Tapao, Officer Champion also decided to not forward the investigation to the GPD highway division, and instead closed the case.

Closed cases are subject to public inspection. When asked, Mr. Tapao said he was not sure if he could provide the report by Champion.

Mr. Tapao also has not answered whether Champion administered a field sobriety test on the driver, or reviewed any video surveillance of the crash to prove the woman presenting herself as the driver was in fact behind the wheel during the crash.

Mr. Tapao also has not answered what the nature of Joneen Terlaje’s involvement at the crime scene was, or whether GPD has undertaken an internal review of her actions that night.

The public, growing weary of their police department, continues to be left in the dark on this case, as GPD loses the confidence of the community.