Police arrest man – wanted for months – for 29 felonies and criminal offenses, and 2 warrants 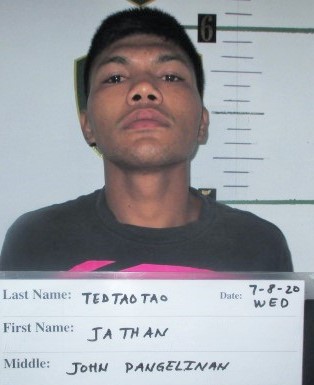 The following is from a news release from the Guam Police Department:

JATHAN JOHN PANGELINAN TEDTAOTAO had been eluding law enforcement officials for months as he also has two outstanding Arrests Warrants issued by the Superior Court of Guam.

On Friday November 26, 2021, CIS Detectives were activated when Patrol Officers from Central Precinct Command had come into contact with TEDTAOTAO who was in possession of a stolen vehicle and suspected narcotics.

He was relinquished to the custody of CIS Detectives and subsequently arrested for the following criminal offenses:

TEDTAOTAO was processed, booked, and confined at the Department of Corrections.