The government of Guam is in a bind in its ongoing court case against Core Tech International over Lot 10184-7. This is the property, where the Northern District Wastewater Treatment Plant sits; a lot that legal land documents show CTI owns.

Here is its predicament: GovGuam has been taxing CTI for that land. How can the government say in court, ‘We own that land,’ when out of court it taxes CTI as the property owner?

A February 16, 2018 Guam Department of Revenue and Taxation receipt leaked to Kandit shows CTI’s tax payment on the property. According to the receipt, CTI paid $1,906.58 for the 39,184 square meters comprising Lot 10184-7. Contrary to the government’s assertion of an error on a certificate of title, this receipt clearly describes the correct lot number and size of the lot. And the DRT receipt notes as the “Current Owner: CORE TECH INTERNATIONAL.” 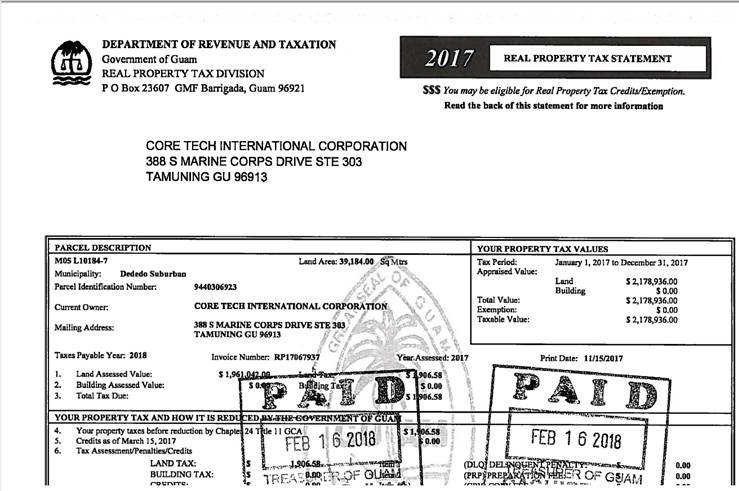 According to the Real Property Tax statute, found at Chapter 24 of Title 11 Guam Code Annotated:

CTI was charged the 7/72% tax levy for the land, which was valued at the time at $1.96 million. Not assessed was the multi-million dollar facility on the land: the NDWWTP. The receipt notes a tax reduction according to Chapter 24. §24111 of that chapter speaks directly both to the reason CTI was not assessed a tax on the NDWWTP, and the government’s dissonance between what it knows, and what it is asserting in court:

“The Legislature finds that since the government of Guam has acknowledged over the years that much private property has been acquired for public use without compensation being paid to the private owner, as described in this Act, it is inherently unfair for the government to continue to collect real property taxes on such land so unlawfully acquired, the frequent situation being that a private lot will be cut in half by a public highway but will still be taxed as though it were a complete lot without the highway. The Director of Revenue and Taxation (the Director) shall forthwith remove from the real estate rolls all those pieces or parcels of what was private property that are used as the sites of government roadways or utility easements. All landowners whose real estate tax payments would be reduced by such removal may present to the Director on forms supplied by the Director, proof by way of affidavit or otherwise that part of their property upon which they are paying real property taxes is actually occupied by the government. Upon verification of the truth of such statements, the Director shall remove such government-occupied property from the taxpayers’ taxable property.”

CTI, in response to GovGuam and Guam Waterworks Authority’s 2018 lawsuit, has asserted and presented to the court evidence that it owns the property; and that GWA has been allowed to operate the NDWTTP – a utility – unencumbered by the land dispute. Ironically, CTI did not provoke the lawsuit by demanding anything. GovGuam brought the suit in December 2018, which was then joined by GWA in early 2019 in order to quiet title to Lot 10184-7 and have the court authorize changes to land documents to show GWA owns the land. Among GWA and GovGuam’s problems making this argument is the fact CTI purchased the property through a legal sale. Judge Elyze Iriarte, in whose court the matter is being litigated, issued an order and decision November 30, 2021 confirming CTI has an ownership interest in the property and raised doubt as to whether GWA had any right to use or occupy the lot.

GovGuam clearly has recognized CTI’s ownership interest for years prior to the court order, and despite its lawsuit claiming CTI does not own the property. In order for CTI to have paid the real property tax on Lot 10184-7, the company had to have received the tax assessment on that property from the government of Guam (DRT). In order for DRT to have made the assessment, the agency must have received the property rolls of the island’s privately-held real property interests from the Guam Department of Land Management. In order for DLM to have recognized CTI as the private owner of Lot 10184-7, legal instruments accepted and filed there, must bare out such a fact.

CTI maintains it has owned Lot 10184-7 since it purchased the property along with several other properties surrounding it in Ukudu, Dededo in 2015. Had the government of Guam actually owned the property from 2015 on, it would not have assessed any real property tax on it. Under the Real Property Tax statute, the legislature mandated an exemption from taxation, when the government owns the land: