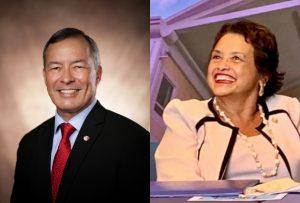 The two political branches of government appear to be in a showdown over the use of federal funds granted to GovGuam for a local stimulus program. You could be paid $800, $1,000, or nothing at all, depending on who wins this political and, what is shaping up to be a legal, battle.
The Guam Legislature created the first stimulus program in December, dubbing it the RISE Act. “RISE” is an acronym for something, but we who honestly cares what that is? The Legislature meant for at one-time stimulus of $800 to be paid to qualifying single filers, who work in the private sector, and $1,600 for joint filers in the private sector. The funding source included what eventually became the pot of some $600 million granted to GovGuam by the federal government; and Guam senators capped the budget for the program at $30 million.
Gov. Lou Leon Guerrero, through executive order, created her own program and called it the All Rise program. She kept all of the tenets of the Legislature’s program, except that she expanded eligibility to public sector workers and to retirees without increasing the $30 million cap.
Late last week the governor’s office stated Ms. Leon Guerrero will be issuing a new executive order that will make it easier for people to apply for the funds, and will direct the Department of Revenue and Taxation to open the applications period no later than September 1, 2021.
Asked whether the governor plans to increase the cap, though, her director of communications Krystal Paco-San Agustin simply said, “No.”
Then, Friday night, the Guam Legislature sent a message of its own. Senators unanimously passed Bill No. 75-36, authored by Sen. Jim Moylan, that:
“The passage of Bill 75 sends a strong message from the Guam Legislature. The measure is a culmination of the community’s voices through social media, online petitions, testimonies, or merely through discussions at family gatherings, coffee shops, dinner tables and water stations at work”, stated Senator Moylan. “Bill 75-36 is a model which the Governor can and should utilize to shape her ‘All Rise Act’ through an Executive Order. It is a commitment to island residents that we hear them, and that with the money in the bank, the administration should start paying out the benefits in the simplest manner possible”, added Senator Moylan.
The problem with the bill is that senators don’t have control over that pot of money; only the governor does. And she’s already threatened to veto the measure.
But with 15 senators voting in favor of that bill, even if she vetoes it, there is a strong likelihood the veto will be overridden and the bill will become law.
“The most critical aspect of Bill 75-36 is the removal of the budgetary cap, which would assure that no qualified applicant, who applies within a reasonable timeline, is denied the benefit”, stated Senator Moylan. “I would like to thank Senators Tony Ada and Chris Duenas for co- sponsoring the measure, Senator Joe San Agustin for expediting a public hearing on the bill, Speaker Therese Terlaje for her commitment in a timely passage of the legislation, and to all my colleagues for their support. As stated earlier, this sends a strong message, and now we will await the Governor’s actions”, added Senator Moylan.
Does that matter? The governor, through her spokeswoman, has already said that increasing the budgeted cap is not for the Legislature to do. And that’s because the funding is not within the realm of the Legislature itself.
But senators – all of them – have asserted themselves anyway.
“The measure recognizes the availability of federal monies, specifically from the American Rescue Plan (ARP), to fund this benefit,” a news release from Mr. Moylan states. “Federal guidelines were released on July 19, 2021 and emphasized that such stimulus programs are qualified expenditures. The Rise Act would not only help many families with pressing needs but would also help spur economic activity.”
249
Share
FAVORITES
By Troy Torres Posted on: Monday, 08/09/2021 2:36 PM Guam Legislature Money 0 comments
249