Despite Public Auditor Benjamin Cruz’s audit alleging Gov. Lou Leon Guerrero’s former legal counsel – Haig Huynh – broke the law in the multimillion-dollar procurement of a hotel in early 2020, Guam’s attorney general will not prosecute him. Mr. Huynh also is the governor’s son in law; he resigned shortly after the controversy broke publicly.

“Criminal wrongdoing has not been found,” Office of the Attorney General’s spokeswoman Carlina Charfauros answered Kandit, when asked, ‘Why have prosecutors decided to not pursue a case against Haig Huynh based on the OPA report?’

That OPA (Office of Public Accountability) report, issued July 19, 2021, stated in part: “Our audit of the procurement of Coronavirus (COVID-19) quarantine and isolation facilities found that the initial emergency procurement conducted by the Office of the Governor (OOG) did not comply with Guam Procurement Law with the following deficiencies: (1) improper procuring authority, (2) conflict of interest with one of the awarded facilities, (3) incomplete procurement record, and (4) contract issues. Therefore, we questioned the total costs of $3 million (M) for the initial procurement.”

As previously reported by Kandit and confirmed by the audit, Mr. Huynh led the procurement of the Pacific Star Hotel at the start of the global pandemic for use as a government quarantine facility. The audit found the governor’s son in law did not have the authority to lead that procurement, and his affiliation to a Guam bank was concerning due to a note the hotel had with that bank.

According to the audit, which was later cited by the attorney general in a news release following his filing of a civil, not criminal, complaint:

“Pursuant to 10 G.C.A. § 19403, the Governor has an “oversight” role of the public health emergency in the activation of the disaster response and recovery aspects of GovGuam, and the initiation of the emergency declaration directly appoints a primary “public health authority” (PHA) to respond to the emergency. As stated in E.O. 2020-03, the PHA is the Director of the Department of Public Health and Social Services (DPHSS) with the authorization to exercise all powers. By delegating OOG’s Legal Counsel to handle the procurement, it bypassed the procuring authority already provided to the DPHSS Director under the PHA and Guam Procurement Law, and the authority of GSA’s Chief Procurement Officer (CPO) also under Guam Procurement Law.”

Regarding Mr. Huýnh’s conflict of interest:

“It appears there was a potential conflict of interest having OOG’s Legal Counsel in charge of the initial procurement when their immediate family had a financial interest with one of the awarded hotels, which was publicized in local media articles. Hotel C’s mortgage was with a local bank that the OOG’s Legal Counsel was previously employed at and his immediate family is currently employed with and owns, which would be a conflict of interest as identified in 5 G.C.A. § 5628 (a) . Upon discovery of an actual or potential conflict of interest, an employee shall promptly file a written statement of disqualification and shall withdraw from further participation in the transaction involved.”

Regarding an incomplete procurement record:

“The contracts for Hotels A through D were not in conformance with the E.O. and 5 G.C.A. § 5215. Specifically, 1) the contracted dates exceeded the 30-day limit for emergency procurement; 2) renewal terms disregarded E.O. terms; 3) total rooms procured conflicted with the Governor’s requested requirement; and 4) the CPO’s authorized signature was missing. 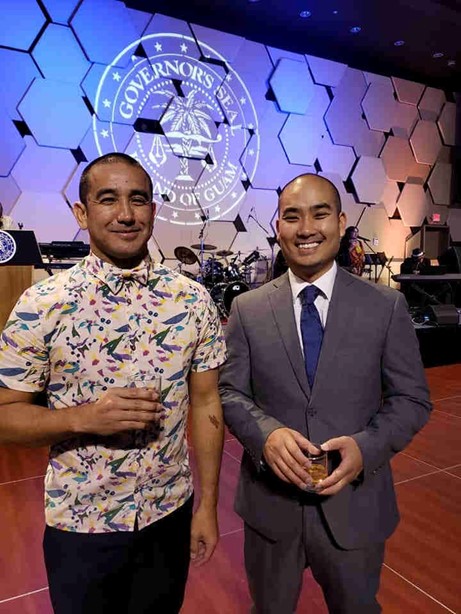 Despite the several citations of laws broken, Mr. Camacho has decided to not prosecute Mr. Huynh, who also is the attorney general’s friend.

Instead, and under pressure from some senators, the attorney general filed a civil suit essentially asking for declaratory judgment on the governor’s procurement power under the Emergency Health Powers Act (EHPA).

“Our filing to the court states that the OAG does not believe any law was broken when the governor leased quarantine facilities for incoming passengers,” Ms. Charfauros replied when asked why the OAG was addressing a question not raised by the OPA. “A May 2021 Supreme Court Opinion affirms that. We have asked the courts to settle the question of validity once and for all, which encompasses the legality of the actions take by the governor.”

While the AG has cited the audit as the basis for this question – a basis Mr. Camacho has ridiculed – Mr. Cruz’s audit did not question the governor’s general procurement powers. In fact, his audit focused on Mr. Huynh’s conduct within the confines of the EHPA.

“The OOG contends that it is within the Governor’s authority under the Organic Act and 10 G.C.A. Chapter 19 “Emergency Health Powers” to execute general supervision over GovGuam during a declared state of public health emergency. However, that authority shall not be in conflict with any Guam laws. In which, Public Law (P.L.) 16-124 specifically repealed the governor’s executive control of GovGuam procurement and transferred that authority to a centralized procurement comprised of the Policy Office, CPO, and Director of the Department of Public Works. In addition, the OOG’s justification for their procuring authority is inconsistent with prior treatment and practice of emergency procurement used in a public health state of emergency.”