A birthday camping trip for the governor’s brother, trips to Managaha, Sarigan and Pagan, and fishing expeditions were among the 85 boating trips on record that federally-funded Recreational Boating Safety Program boats and personnel made for Gov. Ralph Torres and his family.

This is according to the program’s documents and logs, which, according to assistant chief of police for boating safety Captain Kevin Aldan, are accurate accounts of the trips.

“There’s been numerous trips,” Mr. Aldan testified under oath before the CNMI House Judiciary and Governmental Operations committee Wednesday morning. The trips, using BSP vessels, personnel, and fuel, are made to escort the governor. “He goes on his own boat,” he testified. 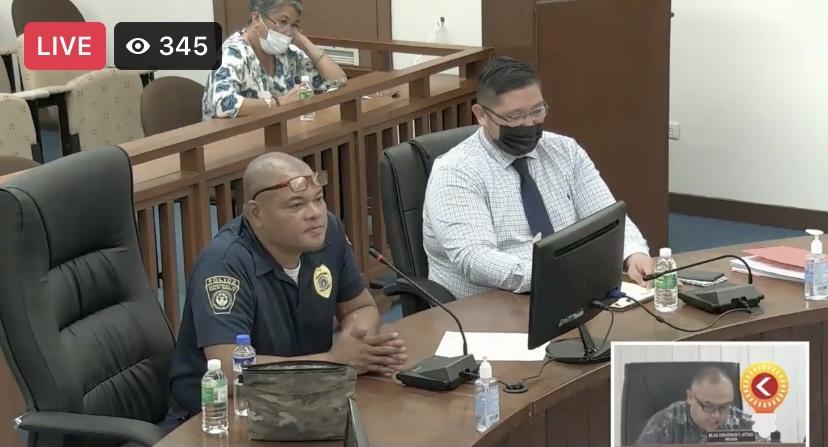 “Who orders Boating Safety Program to use boats for the governor and the first lady’s recreational use?” committee vice chairman Rep. Blas Jonathan Attao asked him.

The tribunal entered several BSP log book entries into the record and asked Mr. Aldan about the entries. One entry from August 13, 2017, showed the BSP’s Zodiak 3 departing Anatahan at 8 a.m. that day to escort “Vic Torres vessel,” as indicated in the log.

“Who instructed boating safety personnel to be on standby to escort Vic Torres’s boat?” Rep. Donald Manglona asked the captain.

“That would be the commissioner,” he replied.

A few days prior to that, according to the log book, BSP personnel and vessels took an overnight weekend excursion for, what the log book identifies as a ‘birthday camping trip’ to Sarigan. The log entry states the federally-funded officers and vessels escorted a Boston Whaler and a McKee. The governor’s brother owns a Boston Whaler. An 8:55 a.m. log entry the following morning, on August 6, 2017, states “Trolling.”

“Why would a DPS boat and personnel be used to escort a boat by the governor’s brother?” Rep. Ed Propst asked Mr. Aldan.

“Because the governor was onboard,” he replied.

Asked what business he recalls was conducted on that trip by the governor, Mr. Aldan replied, “We don’t ask what’s the business; we just get the orders.”

Despite Mr. Aldan’s contention that BSP resources only have been deployed during the 85 trips in question because the governor was on board, a June 15, 2021 log entry makes no mention of the governor as part of the party that departed Saipan on a trip to Pagan.

The entry, which showed Mr. Aldan’s presence during that trip, states BSP was shadowing a private vessel called the Papa San.

“Who’s boat is the Papa San?” committee chairwoman Rep. Celina Roberto Babauta asked the captain, to which he replied, “One of the Torres brothers.”

“Does it state anywhere the governor was on board?” she asked him. “No, ma’am.”

That day’s entry shows that, upon approach to Saipan, both the Impact (BSP vessel) and the Papa San stopped in open water to refuel. Ms. Babauta translated, and Mr. Aldan confirmed, the entry to state: “Impact finishes last mission; fuel up with Papa San on return to base.”

“I guess just this once,” Mr. Aldan said.

The morning hearing ended with questions surrounding a June 15, 2021 entry showing that BSP personnel picked up an inmate released to their custody from the Department of Corrections and took this inmate on the trip.

Mr. Propst began asking what purpose an inmate has aboard the expedition, but suspended his inquiry on the matter to respect the noon recess the committee had appropriated. Questions on the matter are expected to continue once the committee resumes its questioning of Mr. Aldan at 2 p.m.

It should be noted that the illegal release of an inmate by a former governor led to the Commonwealth’s last impeachment proceedings.