Home >> Boys were bound, beaten, and starved by dad and stepmom, according to AG

Boys were bound, beaten, and starved by dad and stepmom, according to AG

The following is a Declaration of Probable Cause prosecutor Courtney Leigh Shalice made to the Superior Court of Guam that describes allegations the Office of the Attorney General of Guam is making against David Michael Martinez Quinata, 37, and his girlfriend, Sherrie Antoinette Taijeron Nauta, 29:

COMES NOW, Courtney Leigh Shalice, a duly appointed Assistant Attorney General, and aver, upon information and belief that the foregoing is true. I have reviewed Guam Police Department Report Number 2021-19562 and after reading the reports, hereby state as follows:

On or about August 14, 2021, at approximately 8 AM, Robert Baker, Jr. (“Witness 1”) and Rowena Castro (“Witness 2”) observed a minor, later identified as D.M.M.Q. [DOB: 9/29/2007] (“Victim 1”) standing on Wusstig Road and Chalan Eskuela. The witnesses observed that Victim 1 was barefoot and was only wearing what appeared to be makeshift underwear. The witnesses further observed that Victim l had rope on his wrist and injuries on his wrists and ankles. As the witnesses were speaking to Victim 1, a blue Rav4 pulled up driven by an unknown male individual. The unknown male individual shouted at Victim, “YOU’RE GOING TO RUN FROM ME FUCKER,” and then yelled at the witnesses, “LEAVE HIM ALONE! I’M TRYING TO TEACH HIM A LESSON.” Victim 1 started to cry and stated, “DAD! I’M SORRY DAD.” The unknown male pulled Victim 1 into his car and drove off. The witnesses then called police. 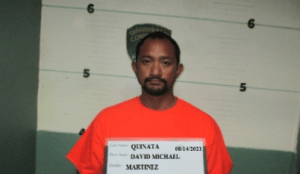 GFD Medic arrived at the precinct to care for Victim 2’s injuries. Medics attempted to remove the gauze from Victim 2’s injuries, but gauze was stuck to Victim 2’s flesh. After several attempts, Victim 2 asked to remove the gauze himself. As Victim 2 was able to remove some of the gauze, Victim 2 exposed the flesh and bacteria build-up and a strong odor emanated from the wound. Officers and medics observed Victim 2 had two lacerations to his right wrist and forearm, older lacerations to the left wrist and forearm, lacerations to his left and right calves that were deep enough to place an extension cable inside, and bruising to his left eye.

CPS was called and later took custody of Victim 1 and Victim 2. The above-mentioned rope was recovered from the residence. CSI responded and took photos of the victims’ injuries and the residence.

Based on the foregoing, there is probable cause to charge DAVID MICHAEL MARTINEZ QUINATA with:

Based on the foregoing, there is probable cause to charge SHERRIE ANTIONETTE TAIJFRON NAUTA with: