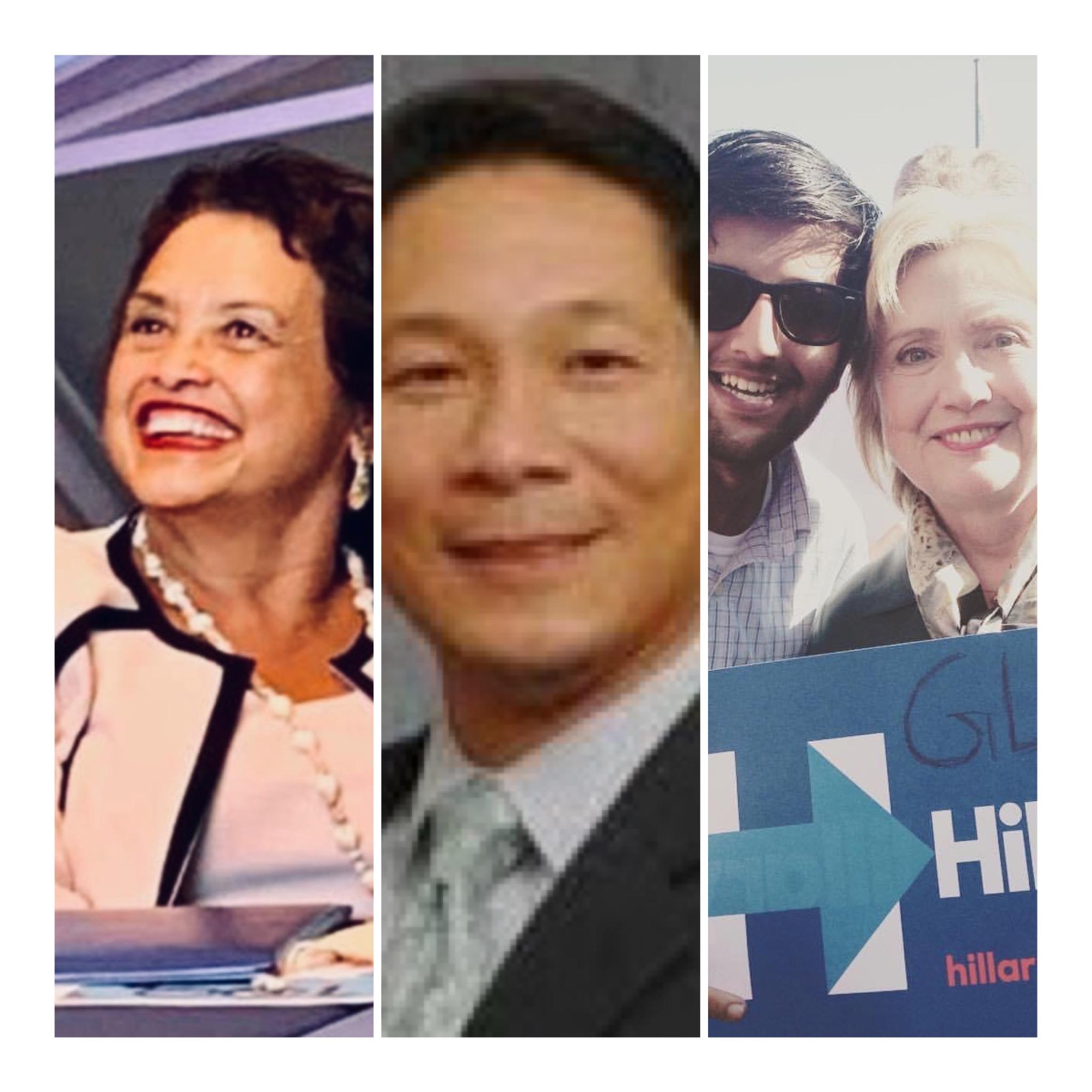 Gov. Lou Leon Guerrero’s party is prohibiting more than 95 percent of Guam’s 50,066 registered voters from choosing between her and Michael San Nicolas at the August 27 Primary Election. And rather than participate in a race, where voter suppression is being advanced by one of the two major political parties, Mr. San Nicolas and his running mate have stated they may be seeking an independent nomination to the November General Election instead.

Thirty party bosses of the Democratic Party of Guam Tuesday night voted to close the Primary Election democratic ballot to registered democrats only. The unprecedented move allows only 2,501 registered democrats to receive and cast their ballots on August 27, in an election the government of Guam funds and operates through the Guam Election Commission.

The campaign for Lou Leon Guerrero and Josh Tenorio has not responded to Kandit’s request for their reaction to the news. Ms. Leon Guerrero is the titular head of the party. Her surrogates comprise the party’s Central Executive Committee, which made the decision. This will be the first time in Guam gubernatorial election history that one of the political parties is closing their Primary Election.

The Primary Election exists to whittle down the field of candidates so that each political party advances only one gubernatorial team into the General Election. In every Primary Election since 1970, every registered voter has had the option to vote on either the democrat or republican ballot, so long as the voter does not cross over. The process has promoted voter participation and has democratized the selection of gubernatorial teams that voters want to advance into the General Election.

“Our goal is to strengthen our party and we continue to do so by working closely with the Democratic National Committee, which has provided critical funding to build our party and share best practices to protect our party and promote democrat candidates,” Democratic Party of Guam executive director Chirag Bhojwani said.

That funding democrats raise won’t help Guam’s taxpayers, who will continue to foot the bill for their closed Primary Election. According to GEC executive director Maria Pangelinan (in a discussion on The Ray Gibson Show Wednesday morning), Guam law requires the GEC to run the election.

Mr. San Nicolas, who last week announced his candidacy with Sabrina Salas Matanane for the democratic nomination for governor, believes this move has nothing to do with bolstering democrats, but everything to do with advancing one democrat – the incumbent governor.

“The attempts by the Democratic Party leadership in the Central Executive Committee (CEC) – made up of Lou and Josh supporters and employees – to cut off voters who don’t register as Democrats from voting in the Democratic Primary election is a simple attempt to force people to get partisan, rather than to vote for what they feel is best for Guam, and that shows it’s all about themselves and not the people,” Mr. San Nicolas said in a statement he issued shortly before the democratic party bosses confirmed their vote.

“All the more we see the true colors of the Lou and Josh machine reveal themselves, and all the more they show that it has nothing to do with empowering the people and lifting them up, but everything to do with manipulating people so they can dominate their lives,” said Ms. Salas Matanane.

Is a closed Primary Election even possible?

Ms. Pangelinan, the GEC chief, confirmed that in order for her staff to conduct this closed democratic Primary Election, the GEC will need to promulgate rules through the Administrative Adjudication Act process for the proper implementation of the election. It will take at least six months for such a process to be finished. As of today, there only are 121 days to the Primary Election.

“The biggest deadline for us is July 13,” she added. “That is the last day (45 days before the Primary Election) for us to send out the UOCAVA (Uniformed and Overseas Citizens Absentee Voting Act) ballots. Ballots have to be done and mailed out by July 13.”

“Early voting starts July 28,” she said. “And before all that, June 28 is also the deadline for candidates to file their packets. We have to vet their packets if they filed last minute. Then, we collect all those that have submitted all their requirements, then the board has to ratify the candidates. And then the ballot placement is drawn.”

Asked whether a change in the process is even possible, Ms. Pangelinan said, “We have to do what we can inside the law.”

And to be sure, there are several laws at play here, to include the 2003 ruling by Presiding Judge Alberto Lamorena III, which democratic party bosses Tuesday night used to predicate their sudden move.

From the infamous unity pledge to mayhem

“What we just witnessed is the culmination of years of these establishment democrat party bosses never being able to control Mike San Nicolas, and hating his every success,” a former member of the democratic party CEC told Kandit. “Every time he did something on his own, they tried to reel him in, and if that didn’t work, they tried to undercut him and bring him down. Every single time, Mike defied all the odds, broke all the old political rules, and they thought it would be the end of him, and he won. They hate him for that! They cannot stand him, and what the Democratic Party of Guam did last night is really akin to a control freak finally having enough of someone standing up to them. They just went hysterical. What they did is crazy.”

Mr. San Nicolas, a democrat, entered and remained in elective politics as a maverick, oftentimes refusing to tow the party line as a senator, and now as Guam’s representative to the U.S. House of Representatives. In 2016, democratic party officials threatened to expel him from the democratic party Primary Election ballot that year for his refusal to sign a unity pledge that would have required him to endorse every democrat in that election, even if he didn’t actually support their views.

“It needs to be about the people, not the politicians,” he said at the time.

In 2018, and despite attempts by party bosses to prevent him from doing so, he ran against incumbent democrat Congresswoman Madeleine Bordallo, and unseated her in the Primary Election in a stunning upset no one else has ever been able to do. Afraid the election was a foreshadowing of this year’s gubernatorial election, the democrat administration of Leon Guerrero-Tenorio began attacking the freshman congressman in 2019. Those attacks against him carried into his reelection bid in 2020, when the governor threw her support behind former Congressman Robert Underwood in the democratic Primary Election.

The attacks by democrats against their own have only increased since then, and as rumors of San Nicolas’s bid for Adelup in 2022 crescendoed.

“It really made no sense how they attacked him even when he got war claims paid, solved the EITC problem, got Medicaid coverage for our Micronesian brothers and sisters, and did all these things no one else was able to do,” the democrat source said. “They just hate him. It’s clear now that they’ll do anything to keep him from winning and to stay in power, and it’s quite sad when you think about it.”

For decades the Democratic Party of Guam has proudly touted its moniker, “Party of the People.” That party, or at least its current cabal of party bosses, has just disenfranchised thousands who typically vote in their Primary Election.

In the 2018 gubernatorial Primary Election, for example, 25,677 people voted in the democratic race for governor. Ms. Leon Guerrero’s party has just canceled out the participation of 90 percent of those voters. Only 2,501 voters, as of today, are registered democrats. That isn’t even half of the 8,267, who helped her win that 2018 Primary Election race.

Then there’s the practical application of this unprecedented policy. What happens, when a voter asks for a democratic ballot at the Primary Election, and is denied that ballot because he or she does not appear on the rolls as a registered democrat?

“This is going to lead to lawsuits, I can just see it already,” the democrat source said. “This is going to disenfranchise voters at an election paid by the government, and someone is bound to take this to court and say, ‘The Democratic Party of Guam is violating my civil rights!’ How ironic would that be? How embarrassing that will be, and not to mention unfortunate.”

Then there’s the question of whether the incumbent governor wants to disenfranchise her own employees. The government of Guam consists of about 12,000 people, the vast majority of whom are registered voters. It is likely that only a fraction of the 2,501 registered democrats are GovGuam workers.

Normally, incumbent governors seeking reelection use their access to the GovGuam workforce to turn out votes for them.

A strategy amid the chaos?

Private polling and polling conducted by Dr. Ron McNinch at the University of Guam consistently has shown Mr. San Nicolas beating the incumbent governor in this year’s Primary Election. And this was even before he announced his run last week. “That’s probably what’s driving this,” the democrat source said. “They probably understand that the only path to her reelection is if she advances into the General Election, where they hope to trigger a runoff election.”

It is likely Ms. Leon Guerrero’s surrogates, who control the democratic party leadership, anticipated Mr. San Nicolas would run as an independent if the democrats closed their Primary Election. If no one else runs for governor, the likely scenario will be that Ms. Leon Guerrero, Mr. San Nicolas, and republican former Gov. Felix Camacho will all advance into the General Election.

Strategically, Ms. Leon Guerrero may have a fighting chance in such a scenario. In this case, her campaign will work to prevent Mr. San Nicolas from garnering 50 percent plus one vote to outright win the election for governor, and throw the election to a runoff 14 days later. As long as she does not place third in the General Election, she will then face off with San Nicolas of Camacho in the runoff.

“If this is their strategy, then it’s a selfish one,” the democrat source said. “The Democratic Party of Guam will be throwing away decades of campaigning as the people’s party all for the benefit of one person, and even at that, it’s just a risk. This really is the only thing that makes sense, as crazy as it sounds.”