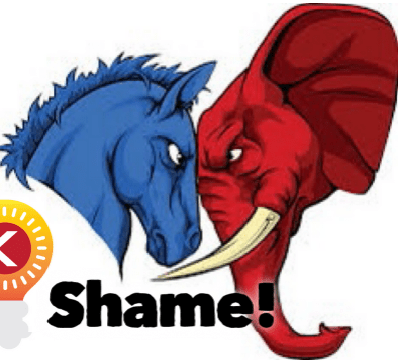 Both political parties are full of it.

The government of Guam is flush with cash. The democrat governor has had a mandate since December to make a very simple one-time $800 local stimulus payment to every qualified taxpayer. Republicans are tripping over themselves in a rush to take credit for this season of political almsgiving. And the guy who actually got the money that will be used to pay out this stimulus and whatever else the governor decides to Christmas Guam with – Congressman Michael San Nicolas; the governor out of no where attacked him for not attending a few social glamour parties in Washington, D.C.

Governor, shouldn’t you be on Guam making sure qualified taxpayers get that local stimulus payment sooner than later? Thankfully, the acting governor recently took action that cut some of the BS from the process of applying for and being paid that local stimulus.

But Adelup’s schizophrenia on the local stimulus package, commonly known as the RISE Act, and the Republicans’s belly flopping all over this issue is such an obvious indication of what is going on here. Local politicians are trying to buy your vote, compliments of the American taxpayer.

Let’s not pussyfoot around this painfully-obvious truth.

The first and most important question is: When will this ‘RISE Act’ be paid?

The clear answer is: No one is providing a clear answer yet. The longer answer – and this isn’t our fault, but the result of the hopscotch our leaders are playing – involves a series of excuses that have maneuvered through a game of political brinksmanship.

Here’s how things got tangled and garbled:
At first, a democrat senator, Regine Biscoe Lee, introduced a bill last year to give private sector workers a $400 per person stimulus payment using federal funds. She, and all the other senators knew darn well the federal funds she wanted to appropriate were not within the Legislature’s jurisdiction to appropriate. As a matter of fact, the federal funds hadn’t even been appropriated by Congress to Guam at the time the RISE Act passed. The Guam Legislature included anticipatory federal funds from a (then) future stimulus package from Congress that would have granted the money to the governors of the states and territories to spend as they saw fit. Gov. Lou Leon Guerrero knew this, and fully supported Ms. Lee’s bill anyway.

Republican senators were quick to point out that the bill was useless, and even chided it as a political opportunity Adelup had gifted to one of its favorites in the legislature. Not wanting to be seen in the vain of Ebenezer Scrooge, the Republicans played along and even helped then-Sen. Therese Terlaje with the amendment that doubled the RISE Act payment to $800 per qualified private sector taxpayer. Among other mandates, the RISE Act required an application process to the Department of Revenue and Taxation. One of the documents the statute required was a verification of residency from your village mayor. All of this was supported by the governor.

When Congress passed the American Recovery Plan Act – the federal stimulus – and awarded GovGuam more than $600 million in direct aid funding at the discretion of the governor, Ms. Leon Guerrero issued an executive order that essentially said the RISE Act would be expanded to include stimulus payments to public sector workers and retirees as well. She dubbed it the All RISE Program.

No sooner did the governor change the program than Republican Sen. Jim Moylan ask her to use her power to increase the stimulus amount from $800 to $1,000. When she ignored his letters, he introduced a bill to raise the amount, knowing full well that the legislature had no authority over that money.

Then the money came in. And then time passed. And we all were waiting. First the governor told us she was waiting for guidance on whether she could make the payments using the direct aid federal funding. Then Mr. San Nicolas called her out, telling the public other jurisdictions already were making payments. That’s when the story changed from guidance to the inadequate authorization by the legislature through the RISE Act for the amount of money actually needed to pay the stimulus.

That left everyone scratching their heads. Why was the governor saying she needed any authorization, when she had been selling the public hard on the fact that she didn’t need the legislature’s stamp of approval to spend those funds and pay the stimulus.

It was around this time that lines grew around mayors’s offices, because the DRT had begun to prepare residents for a yet-to-be-open application period, where they would need to turn in a verification of residency. People began to complain about the useless requirement. That’s when Adelup said it was just following the law. The same law it said it didn’t have to follow.

So then Mr. Moylan and Speaker Therese Terlaje introduced pushed bills that would get rid of the requirement for the mayors verification, and other useless remnants from the first RISE Act. That’s when the governor threatened to veto those bills and made it clear again that the local stimulus program was within her purview. Within a day, Lt. Gov. Joshua Tenorio unilaterally vanquished the mayors verification requirement. Make that one small step for Guam, one giant step for Guam kind.

Is Bank of Guam benefiting from this?
The convoluted mess, which really should be turned into a country music song one day, culminated – not with payments of the RISE Act – but with both political parties trading barbs via news releases.

“Some states and territories have started spending their ARP funds, but on Guam the money continues to remain in the government’s bank,” part of the GOP statement attacking the governor states. “Hopefully, it is earning interest for taxpayers.”

The inference is clear. The republicans are accusing the governor of purposely sitting on the money as it accrues interest in the bank account. The bank account is held at the Bank of Guam, which is owned and operated by the governor’s family.

We presented the accusation to the governor’s director of communications, Krystal Paco-San Agustin, and asked her, point blank, “how does the governor address the criticism that she’s purposely keeping money in the accounts longer to benefit her family?”

“The funds are in an investment account earning interest paid out by the bank,” Ms. Paco-San Agustin said, dispelling the accusations from the republicans that the bank will benefit. “The U.S. Treasury allows state and territory grantees to retain the interest and use this interest towards public services that directly benefit the people of Guam.”

All of that, democrats and republicans? All of that bickering and finger pointing, and we’re no where closer to an answer on when GovGuam will pay out the stimulus? And then in one of the more bizarre moments of contemporary political history, the governor, who is in Washington, D.C. as all of this is getting out of hand, decides that if there’s something she’s going to focus on, it will be to criticize Guam’s congressman for not attending Liberation Day parties in Washington.

Mr. San Nicolas can defend himself, and he has (he was working, and everyone knows that’s true because of the meetings he was very transparently posting about in Honolulu), but here’s the bottom line…

Who cares? None of these issues and arguments and news releases come anywhere near answering the first and most important question about the RISE Act local stimulus: When will it be paid?