Home >> Ever been to the chapel at GRMC?

Ever been to the chapel at GRMC?

I took a tour of Guam Regional Medical City recently and stopped by a place I’m sure many mothers, fathers, sons, daughters, sisters, and brothers have found refuge in their moments of greatest worry and their darkest hours.

On the third floor, just off from the elevators is a beautiful garden. And in the middle of the garden there is a room filled with light; quiet and serene. It’s the chapel, dedicated in memory of Peter R. Sgro, Sr. and Agnes Ada Sgro. The Sgros, who died in September 29, 2003 and November 2, 2005 respectively, never saw this chapel or even the hospital itself. But the memorial, as I have come to learn, is fitting.

It’s difficult to imagine the grief, sorrow, and desperation that has walked into that chapel since it was dedicated seven years ago. How many sisters cried out loud for God to wake their brothers to life? Imagine the wales of mothers, who lost their children. That room has housed the prayers and pleas of Guamanians from all walks of life. It has been there for them; and it will be there for us. 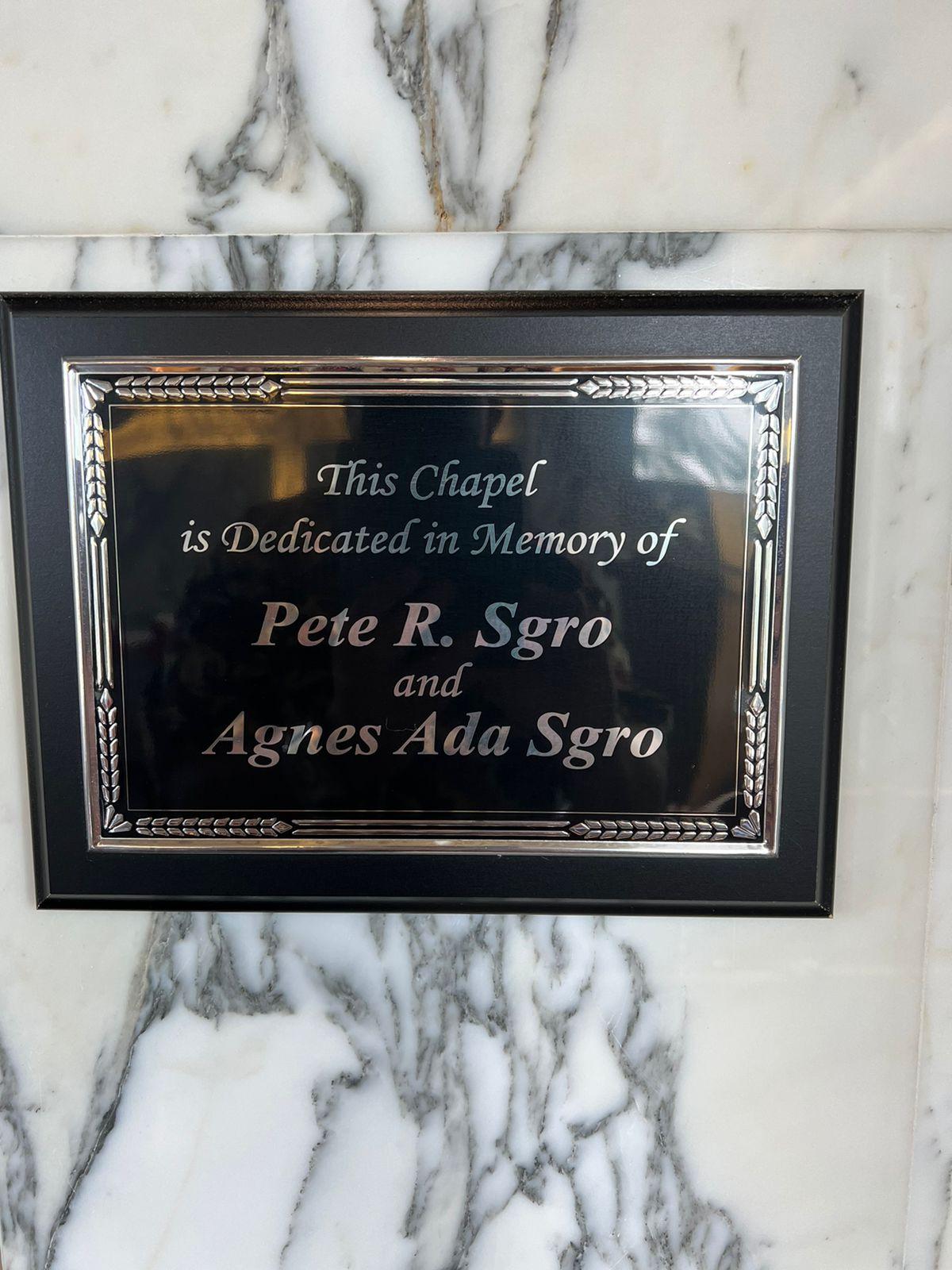 Mr. and Mrs Sgro were not only pioneers in business on Guam, but were known for their philanthropy and significant giving to numerous organizations, in particular the Catholic Church. Both had humble beginnings with Mr. Sgro’s first job on Guam as a truck driver, who picked up and delivered scrap metal. Mrs. Sgro started working in her parents’s market then known as “Ada’s Market.” She could often be found sweating in hot warehouses doing inventory manually, according to those who knew her.

After visiting the chapel I called Mr & Mrs Sgro’s son, attorney and business man Peter R. Sgro, Jr. I had never heard him talk about the chapel and why it was dedicated to his parents.

Attorney Sgro was the visionary of having a state-of-the-art private hospital developed on Guam. And after six years of hard work and collaboration within and outside of Guam, his vision eventually became the Guam Regional Medical City.

Attorney Sgro shared with me that he did not know anything about the dedication of the chapel to his parents until just after he and others cut the ribbon at the grand opening on July 22, 2015. 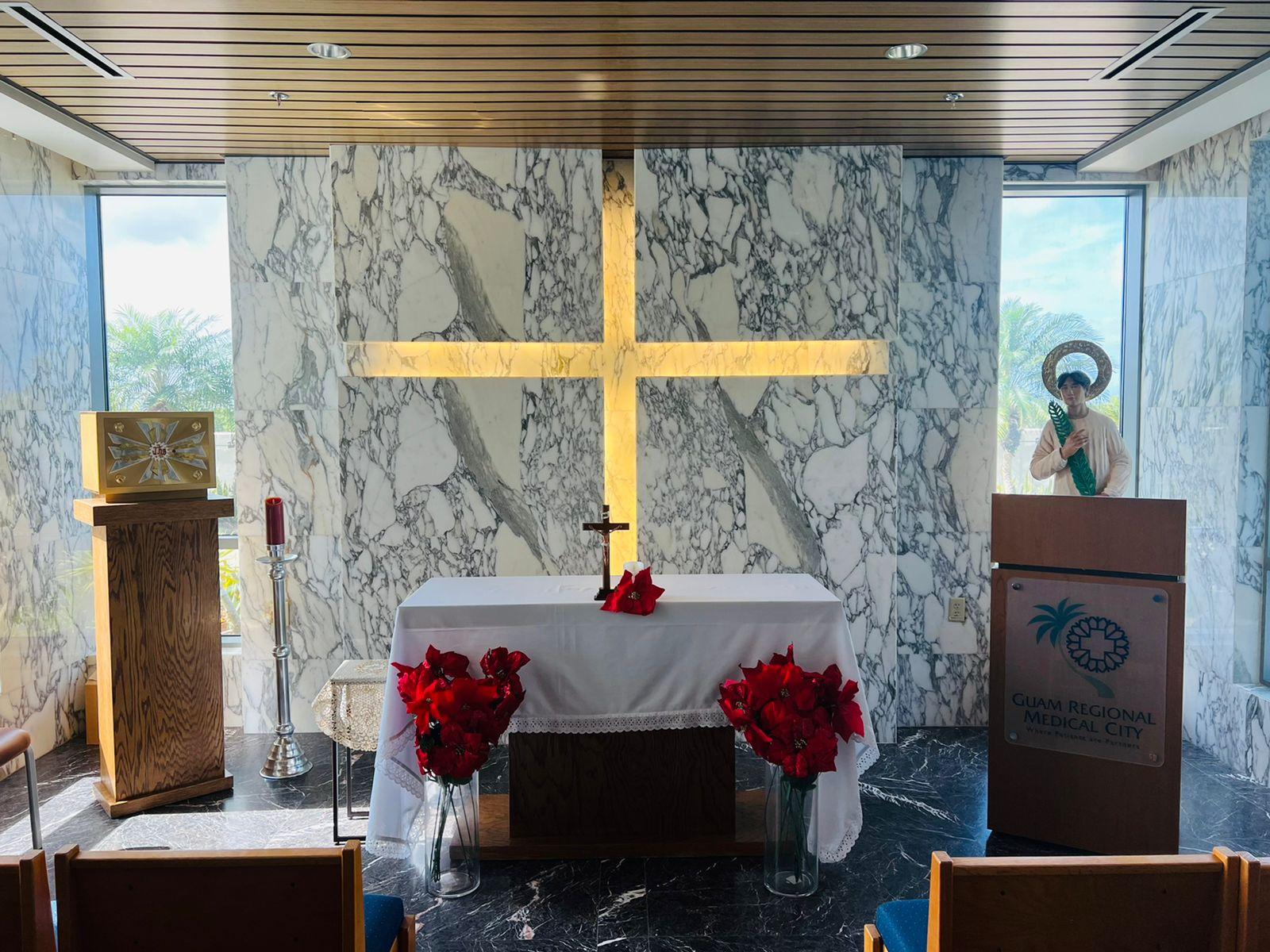 “It was a joyous occasion,” attorney Sgro said about cutting the ribbon. But it was within minutes after the cutting of the ribbon at the first floor main entrance when some management of the hospital grabbed Sgro and told him to follow them. They led him to the third floor, opened the chapel doors, and that is when they told him that in gratitude to his work, management decided to dedicate the chapel after his charitable parents.

GRMC is a 136-acute-care-bed Joint Commission-accredited hospital. It has given residents access to specialty care never provided on island before, which has helped to decrease the need for off-island hospital care.

The next time you visit GRMC, take a moment to see this chapel located on the third floor. Outside both sides of the chapel are two beautiful small parks with flowers, sidewalks and chairs, where patients and families can visit.