Home >> FAA threatens to pull its plug on CPA

FAA threatens to pull its plug on CPA

The Federal Aviation Administration has had enough of the gross financial mismanagement of the Commonwealth Ports Authority, and even called out Gov. Ralph Torres for failing to reply to a letter for a year and a half. If CPA fails to implement a corrective action plan soon, travelers throughout the islands of the Commonwealth may face extraordinary fees. The FAA is threatening to pull its funds, which comprise a significant portion of the CPA’s annual budget. Meanwhile, the FAA is withholding its funds on a reimbursement basis, forcing CPA to generate money locally in order to avail of federal dollars later.

In an April 21, 2022 letter to CPA executive director Christopher Tenorio, FAA Director of the Office of Airport Compliance and Management Analysis Kevin Willis threatened to invoke sanctions against CPA “if CPA fails to resolve all issues by July 31, 2022.” The problem stems from years of bad audits showing missing equipment and the misuse of federal funds at CPA over several audits.

“CPA claims to resolve findings in the management responses, yet continues to be written up again and again by the auditor in the subsequent years for the same and/or similar issues,” Mr. Willis wrote. “The auditor stated in CPA’s 2020 Single Audit report: ‘CPA lacks controls, such as oversight responsibility and monitoring, over compliance with equipment and real property management requirements. CPA is in noncompliance with applicable equipment and real property management requirements.'”

Mr. Willis noted the language the auditor used is the same for noncompliance with procurement rules and regulations. “This,” he stated in his letter, “is a significant concern to the FAA as the largest provider of Federal funding to CPA.”

Among the findings were a list of 39 payments totaling more than $2 million the CPA made for which the procurement officer did not certify compliance that the contracts were for public purposes, or that CPA funds were not wasted or abused. The audit does not state which companies were paid these disbursements, but the payments range from a $300 payment journalized on March 31, 2020 to a $487,638 payment posted September 30, 2020.

This finding was only one of 13 sub-findings contained in one of five main findings under the audit’s Schedule of Findings and Questioned Costs.

The audit confirms several of the findings resulted from questionable sole source procurements that occurred outside the authority given by law.

CPA received every poor mark possible in its audit: qualified with material weaknesses and significant deficiencies found in its internal control over financial reporting and internal control over major federal programs, noncompliance material to the financial statements noted, audit findings material to violations of the Code of Federal Regulations governing FAA grants, and the designation of CPA in a category other than low-risk auditee.

“It is clear CPA cannot resolve these issues on their own and thus cannot effectively manage Federal awards in accordance with 2 CFR Part 200,” Mr. Willis wrote in his April letter. “Effective immediately and based on 2 CFR § 200.208, the FAA is placing ‘Specific Conditions’ requiring Airport Improvement Program (AIP) payments as reimbursements rather than advance payments; and requesting CPA obtain technical or management assistance to resolve all findings and gain auditor acceptance. Specifically, CPA should hire an outside consultant/accounting firm to assist in resolving all Single Audit findings. Until then, FAA cannot accept your proposed corrective actions.”

If issues are not resolved by July 31, the letter states, the FAA may pull its funding.

The letter went on to chastise Gov. Torres’s failure to reply to the FAA’s October 13, 2020 letter to him requesting a status on aviation fuel tax actions plans. Days later, in a letter dated May 12, 2022, Mr. Torres finally responded to the 2020 letter.

The findings of the single audit of federal funds expenditure show repeat offenses and correlate with a second audit, also completed six months past the deadline on December 23, 2021. According to Deloitte’s audit of CPA’s passenger facilities charge (PFC) program, four major findings revealing repeated and growing financial mismanagement of the Commonwealth’s ports continue.

CPA could not even manage to follow up with the airlines to remit the PFC timely for the past seven fiscal years, according to the audited financials. And for the past 11 years, CPA has not kept appropriate accounting records of the PFC.

In total, the agency as of its latest audit, has $879,477 in questioned costs from the PFC program alone. 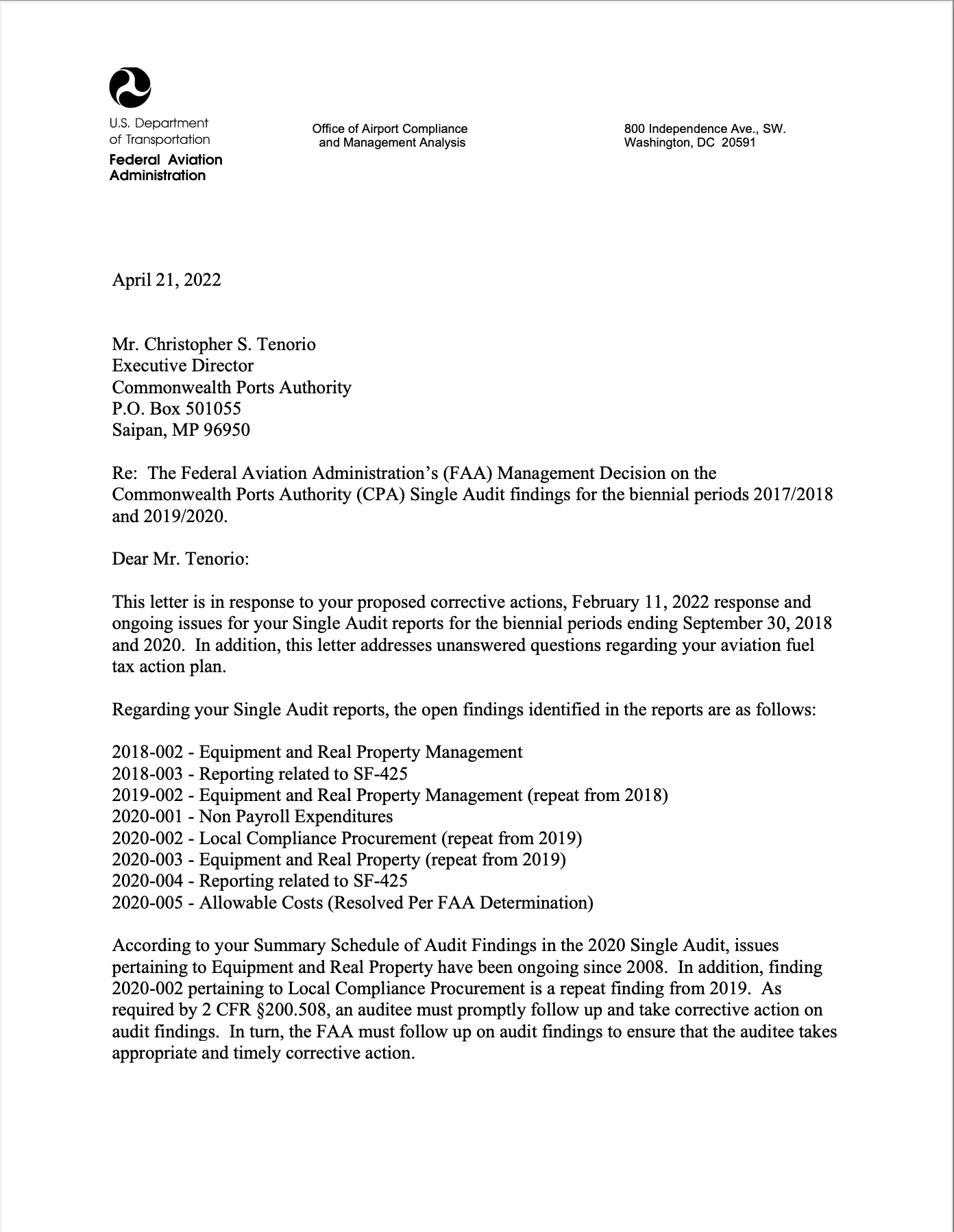 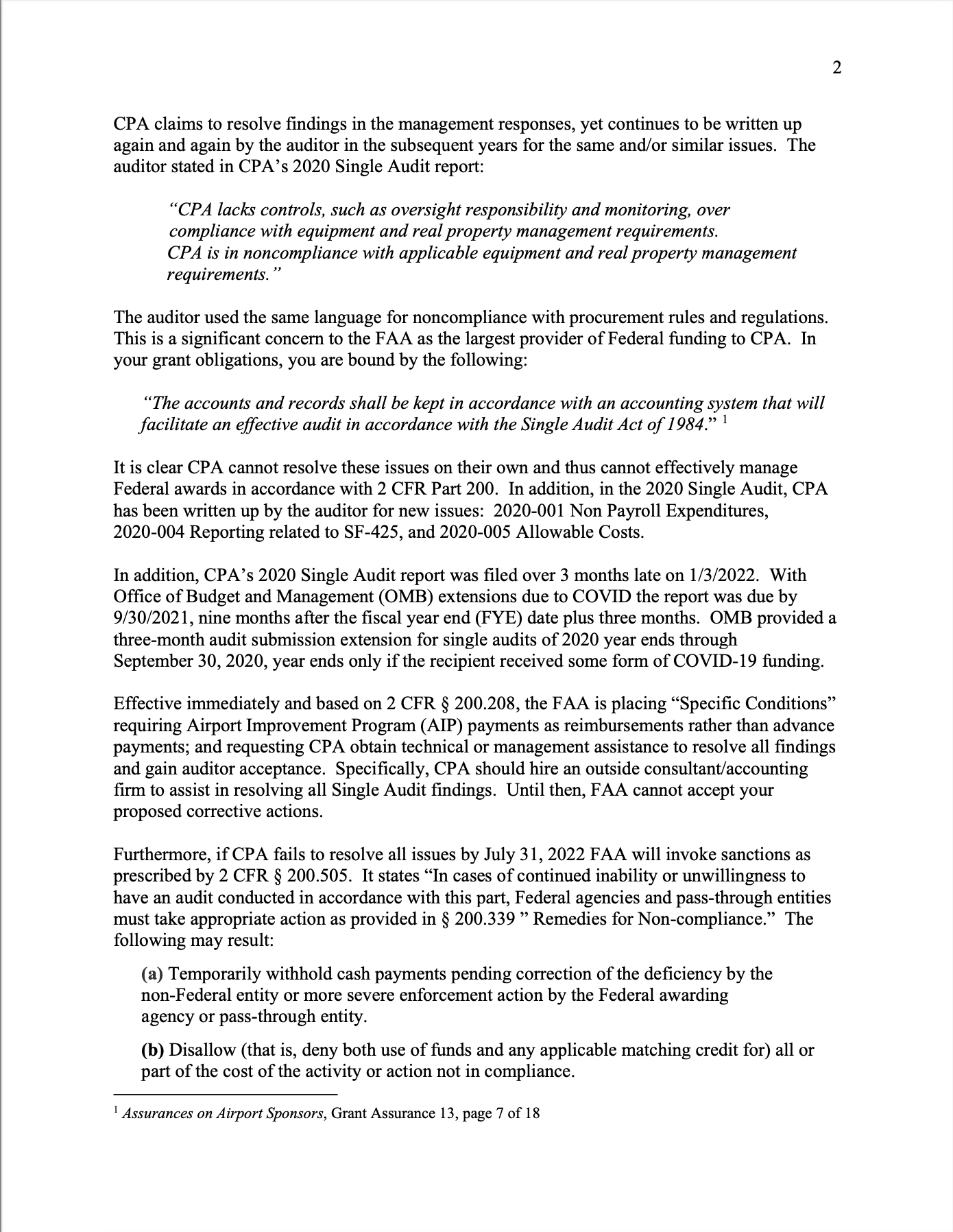 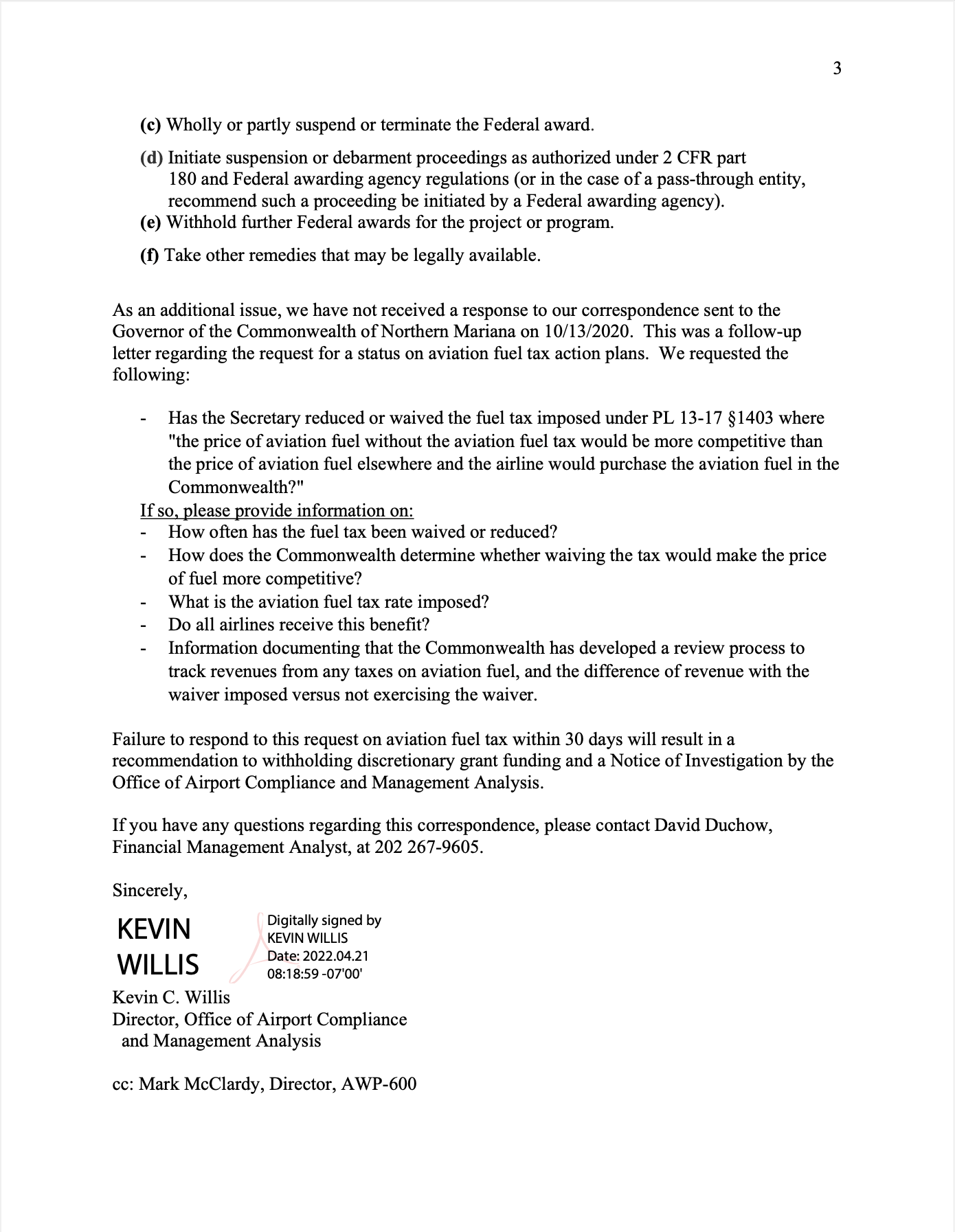