Full Medicaid coverage enhanced and extended for both Guam & CNMI 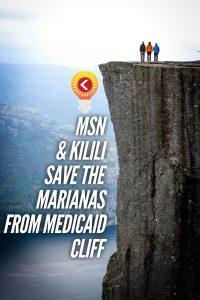 $133M and more annually for Guam

The following is from a news release from the Office of Congressman Michael San Nicolas today:

In recent notification from the Energy and Commerce Committee, full Medicaid coverage to Guam and other Territories is set to be enhanced and extended.

The enhancement comes in the Medicaid Cap of how much total federal dollars are available in the program, with Guam in FY 2022 to receive $133mm and that sum increasing by 2.7% every year. The Biden Administration determined this enhancement in its interpretation of existing law that extended the Cap increases to Territories.

In the upcoming Continuing Resolution (CR) to extend debt ceiling coverage and keep the federal government running, it is anticipated that this CR will likely include a continuance of the 83%/17% Medicaid match for Guam.

“We are grateful for the full support of the Committees of jurisdiction and the Biden Administration for ensuring that we do not revert to the old Cap; which was 10x lower, or the old match levels; which had Guam paying more than 2x as much,” said Congressman San Nicolas. “We can rest easy that our Medicaid solutions are intact and that they will likely remain in place for the foreseeable future, with the added 2.7% annual increase in Cap amount ensuring we remain overly funded indefinitely,” Congressman San Nicolas concludes.

$64M annually for the CNMI

The following is from a news post from Congressman Gregorio “Kilili” Sablan September 18:

Federal Medicaid for the Marianas will be $64,010,000 for fiscal year 2022. The Biden administration alerted me on Thursday that rather than losing Medicaid funding on October 1, the Commonwealth will actually be eligible for more money in fiscal 2022 than we received this year. This is very good news and I thank President Biden and my former House colleague Xavier Becerra, now the Secretary of Health and Human Services, for reaching this conclusion. I worked with the White House to get the President to include Medicaid parity for the insular areas in his FY22 budget. He agreed; and this week’s decision follows through on that commitment. Also important, future years’ funding will increase by an inflation factor based on $64 million, eliminating future cliffs. This is not a complete lifting of the Medicaid cap, as called for in my legislation, H.R. 265; but because the Commonwealth has not used all of the $62 million available this year, according to the Biden administration, increasing the cap to $64 million should fully protect the 38,000 people in the Marianas currently using Medicaid for their health care.
USPL 116-94 also lowered the local match for the Marianas from 45 percent to 17 percent, but under current law the local match will rise again in fiscal 2022 to 39 percent.
We are currently making the case to Republicans in Congress to continue the local match at 17 percent.
We want to include that extension in the continuing resolution that will be voted on next week to keep the government funded.
So far, I understand that Republicans have said they are opposed to keeping the local match at the lower level. So, I am asking Governor Torres to begin calling his Republican colleagues who are standing in the way.
If the Governor cannot convince his Republican friends, then he has the $483 million that we provided him in American Rescue Plan Act a few months ago to make the local match – only about $29 million.
With all that cash at his disposal, I certainly hope the Governor will be willing to help the 38,000 people in the Marianas who depend on Medicaid for their health care.
353
Share
FAVORITES
By Troy Torres Posted on: Tuesday, 09/21/2021 11:56 AM CNMI Guam Health Money 0 comments
353