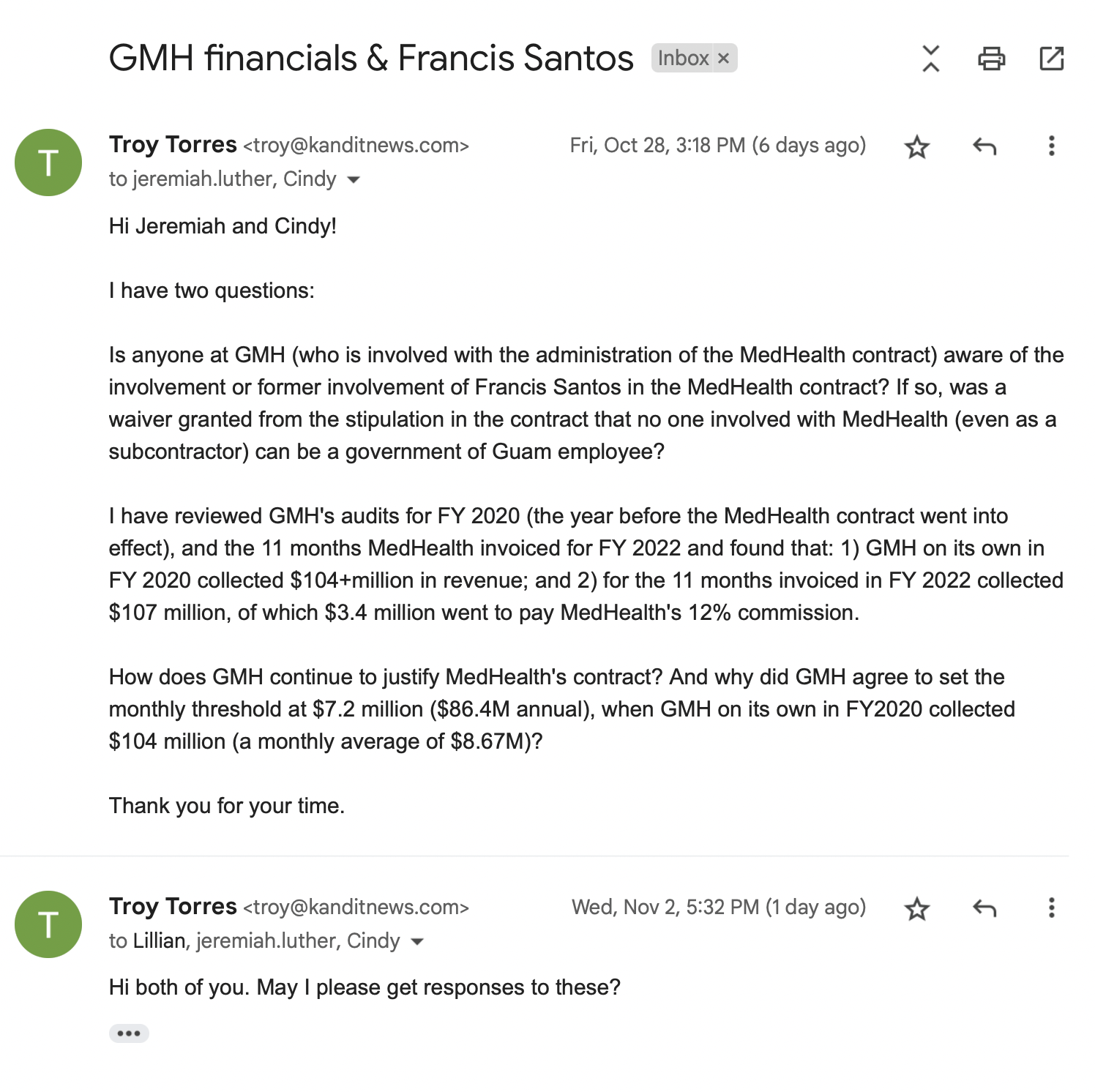 Guam Memorial Hospital officials are refusing to deny the involvement of the governor’s top campaign official in a multi-million dollar contract. They also refuse to answer how the contract with MedHealth Solutions has benefitted the hospital after Kandit confronted officials with the hospital’s audited financials.

In Fiscal Year 2021, GMH agreed to pay MedHealth 12 cents of every dollar the hospital collects after collecting $7.2 million a month. That $7.2 million threshold was set in contract negotiations between MedHealth and GMH. MedHealth thus far has invoiced more than $3.4 million, and GMH administrator Lillian Perez-Posadas has since renewed the contract for another year.

But according to GMH’s audited financials of Fiscal Year 2020 – the year before the MedHealth contract went into effect – GMH on its own collected $104 million in revenue. That came out to a monthly average of $8.7 million, or $1.5 million more than the threshold from which MedHealth now collects a 12 percent commission.

“How does GMH continue to justify MedHealth’s contract? And why did GMH agree to set the monthly threshold at $7.2 million ($86.4M annual), when GMH on its own in FY2020 collected $104 million (a monthly average of $8.67M)?” Kandit asked GMH legal counsel Jeremiah Luther and spokeswoman Cindy Hanson nearly one week ago.

Neither official responded to the inquiry. Kandit followed up yesterday with both officials and included Ms. Perez-Posadas in the inquiry. None have responded.

The other part of the inquiry dealt with the possible involvement of Leon Guerrero-Tenorio campaign chairman and now acting superintendent of education Francis Santos in the MedHealth contract.

Section 7A of the contract between GMH and MedHealth states, in part: “The Contractor and its officers, agents, servants, subcontractors and employees are independent contractors performing services for GMHA, and are not employees of either GMHA or the government of Guam.”

Kandit also has asked Mr. Santos about his alleged involvement with MedHealth and its officers. He has not responded to several inquiries.

According to an affidavit of ownership GMH disclosed to Kandit from a Freedom of Information Act request for documents, MedHealth is owned by Rene Ramos, Paul Pineda, and Glenn Hermes.

Mr. Ramos has several multi-million dollar contracts with both the governments of Guam and the CNMI, including the award of an emergency procurement to house several Guam Department of Public Health and Social Services offices at his RanCare building in Tamuning. A recent audit released by the Office of Public Accountability states the DPHSS now is GovGuam’s top renter, spending $2.8 million on rent this past fiscal year. Mr. Ramos and his companies also have contributed thousands to the governor’s reelection campaign.

As previously reported, among the revenues included in the formula for MedHealth’s cut of profits is the garnishment of tax refunds to GMH. Department of Revenue and Taxation director Dafne Shimizu said she was not aware of such arrangement, while Ms. Hanson admitted GMH agreed to the inclusion in the formula.