Home >> Governor charging thousands a month in utilities to taxpayers

Governor charging thousands a month in utilities to taxpayers

Gov. Ralph Torres has been consuming thousands to tens of thousands of dollars a month in water and power services. And the Commonwealth’s taxpayers have been footing the bill.

Kandit in December 2019 began exposing documents showing Mr. Torres was reimbursed by the Department of Finance thousands of dollars per month for his personal consumption of power and water at both his residence, and a power meter registered to his sister.

Last Wednesday, while questioning Lt. Gov. Arnold Palacios about the governor’s questionable expenditures, Rep. Tina Sablan (D-Saipan) revealed more reimbursement memos and receipts showing the governor’s excessive use of utilities at his private residence, the amount of time the Commonwealth Utilities Commission allowed him to remain in arrears, and the money the governor took from taxpayers to foot his bill.

Document number 1729718, a reimbursement memo issued by acting special assistant for administration Shirley Camacho-Ogumoro on March 14, 2019, shows Mr. Torres applied for and received $6,630.90 reimbursement for his use of utilities between October 2018 and February 2019. These are the five months succeeding the devastation of Supertyphoon Yutu, when most residents were without utilities, and many were living in tents. 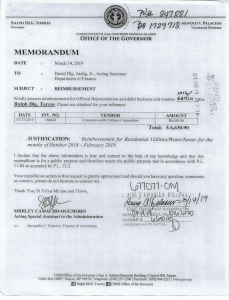 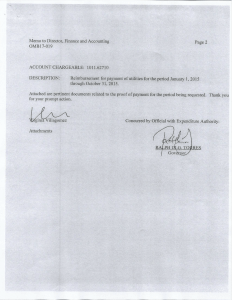 The governor’s utilities consumption started out more modestly, when he became the governor following the untimely death of his predecessor, the late Gov. Eloy Inos.

According to a monthly breakdown utilities schedule in Document Number 1557475, which appears to be his first shot at utilities reimbursement, Mr. Torres began charging the taxpayers of the Commonwealth for his personal consumption of power and water literally the day following Mr. Inos’s death. According to this document, from December 29, 2015 (Mr. Inos died the day before while recovering from surgery stateside) to December 31, 2015, Mr. Torres used, paid for, and was reimbursed $89.94 for just three days of utilities use. 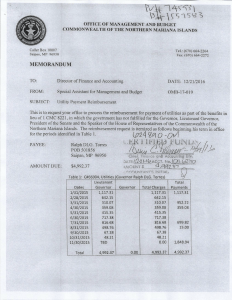 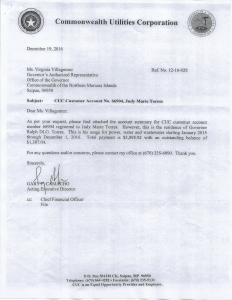 By the end of the fiscal year on September 30, 2016, he had consumed $3,895.92, and was reimbursed that amount. This same document shows Mr. Inos did not have the Commonwealth government pay for his utilties during Fiscal Year 2016. According to a document (Ref. No. 12-16-028) accompanying the reimbursement memo, CUC acting director Gary Camacho states the account for which the taxpayers reimbursed Mr. Torres actually belonged to his sister, Judy Marie Torres.

The governor didn’t stop there, though. On December 21, 2016, he gave himself a Christmas gift: $4,992.37 in reimbursement for his power and water consumption during the time he was the lieutenant governor under Mr. Inos and for which the late governor forbade the two from receiving a utilities allowance. Mr. Inos was known for his fiscal prudence. 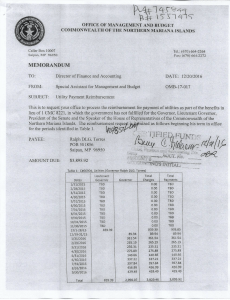 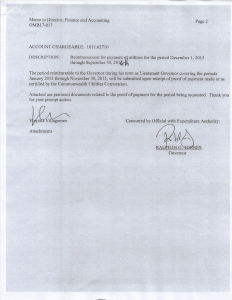 Ms. Sablan also presented documents showing that in one month alone, Mr. Torres had consumed more than $16,000 in utilities. The taxpayers footed that and all his monthly utilities costs since serving as lieutenant governor beginning January 2015, and through his terms as governor.

Mr. Camacho is expected to appear before the CNMI House Judiciary and Governmental Operations Committee under subpoena to answer questions of the governor’s utilities use as the committee continues its corruption inquiry. The hearing begins at 10:30 a.m. Tuesday. Kandit will cover the event live.