Gov. Lou Leon Guerrero, who once criticized the last administration’s excessive use of police resources on private security, has forced taxpayers to spend $2 million in one fiscal year on the executive security apparatus that provides 24-security for her and Lt. Gov. Joshua Tenorio. That is the equivalent of the annual salaries of 40 full-time police officers, or about 15 percent of the entire Guam Police Department force.

Republican Sen. Jim Moylan, who arguably is Ms. Leon Guerrero’s chief political critic, Monday released information he received from the Guam Department of Administration from a Freedom of Information Act request. The information is concerning the amount of money taxpayers forked out between Fiscal Years 2018 and 2021 (the current fiscal year) to pay the police officers who protect the island’s top two leaders. 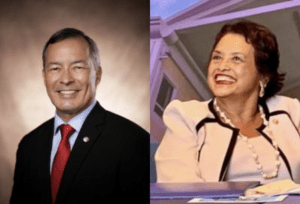 The entirety of Fiscal Year 2018 occurred during the Calvo administration. The first three months of FY 2019 were the last three months of former Gov. Eddie Calvo’s term, and the remaining nine months were the first of Ms. Leon Guerrero’s term.

According to the information from the DOA, which is the government’s cash spending and human resources agency, Ms. Leon Guerrero in FY 2020 spent 62 percent more than her predecessor in his final year in office. The payroll costs for the police officers guarding her and the lieutenant governor were more than 50 percent higher than that of the costs during the final year of the Calvo administration. The overtime costs for these officers more than doubled during this period.

Mr. Calvo’s excessive use of police officers to guard he, his wife, and his lieutenant governor on and off island was justifiably criticized by the Guam Legislature and media during his second term in office, and by Ms. Leon Guerrero herself while she was campaigning for his seat. This is what makes her extravagance all the more appalling.

Compounding the problem is the shrinking of the police force, which was maintained above 300 full time police officers during the last administration, but has since suffered from attrition that has not been matched by recruitment. There are now  fewer than 300 police officers on the force, creating major staffing shortages of patrol units at the precincts and detectives to solve criminal cases.

“Every dollar which is spent on Executive Security is a dollar being taken away from the Guam Police Department’s budget to focus on their overall mission,” Mr. Moylan said in a news release. “While we are not taking away the necessity of needing to protect the Governor, we need to establish a plan which promotes accountability when it comes to these expenses, versus the blank check process we are experiencing today.”

The senator introduced legislation to require the chief of police to separate out the budget he intends to operate the executive security section from the rest of the GPD. The bill has no other co-sponsors, and likely will be referred to Democrat Sen. Jose “Pedo” Terlaje’s public safety committee for further disposition before and if it ever makes it to the floor of the full Legislature.

The senator believes his legislation, if passed into law, will provide a needed measure of accountability and scrutiny that will make Adelup think twice about its use of police officers for private security.

“That’s the primary objective of this legislation,” Mr. Moylan said. “In a recent response, we were advised by the front office that they were prudent with these expenses, but the results of the FOIA state otherwise. When you compare the FY19 expense report, which is still relatively high, the Executive Branch spent an additional million dollars and over $850,000 respectively, in the last two fiscal years on Executive Security. These were the periods of the lockdowns and virtual meetings. These are funds being taken away from GPD and protecting the rest of the community. That isn’t right.”

Moylan joins Kandit Live in studio to discuss this matter in further detail at 11 a.m. Thursday.