Despite sworn testimony in court claiming the Ukudu property, where the Northern District Wastewater Treatment Plant operates, belongs to Guam Waterworks Authority, the government of Guam for the seventh year in a row assessed and collected taxes on the property from the land’s registered owner – Core Tech International.

According to a February 15, 2022 receipt from the Treasurer of Guam, CTI paid the $1,906.58 land tax on Lot 10184-7, the land where GWA operates the NDWWTP. Land documents properly registered at the Guam Department of Land Management show CTI purchased the property from its last title holder, Younex, in 2015. That was the same year Guam Department of Revenue and Taxation began assessing CTI land tax on the property.

The land tax is based on the assessed value of the land, which according to the documents is $1,961,042.00. Interestingly, even though there is a multi-million dollar improvement on the property – the NDWWTP – GovGuam provided in its assessment to CTI a building assessed value of $0.00. The assessment is consistent with Guam law: the absence of a tax on the NDWWTP is the government’s recognition of the improvements as a government facility, while the presence of a land tax is the government’s recognition that the land where the improvement sits is privately held.

Nonetheless, in December 2018, then-director of land management Michael Borja sued CTI in the Superior Court of Guam to seize title to the property. GWA joined the lawsuit months later. Since then, Judge Elyze Iriarte and the Justices of the Supreme Court of Guam have handed down three rulings against GovGuam, bringing CTI closer to its counterclaim of $200 million in inverse condemnation and damages GovGuam brought upon itself, when it sued CTI without provocation.

DRT’s assessment of the property tax on Lot 10184-7, and Core Tech’s payment of the tax for the past seven years was not some mere happenstance that can be chalked up to clerical error. The assessment of the tax begins with the formulation of the annual property tax roll, which is certified under penalty of law annually by the Guam DLM as to the accuracy of the landowners, the sizes of the lot, and the improvements upon the lots. Then, the DRT Board of Equalization must attest as to the accuracy of the information and the assessed values of the land and buildings upon the land. 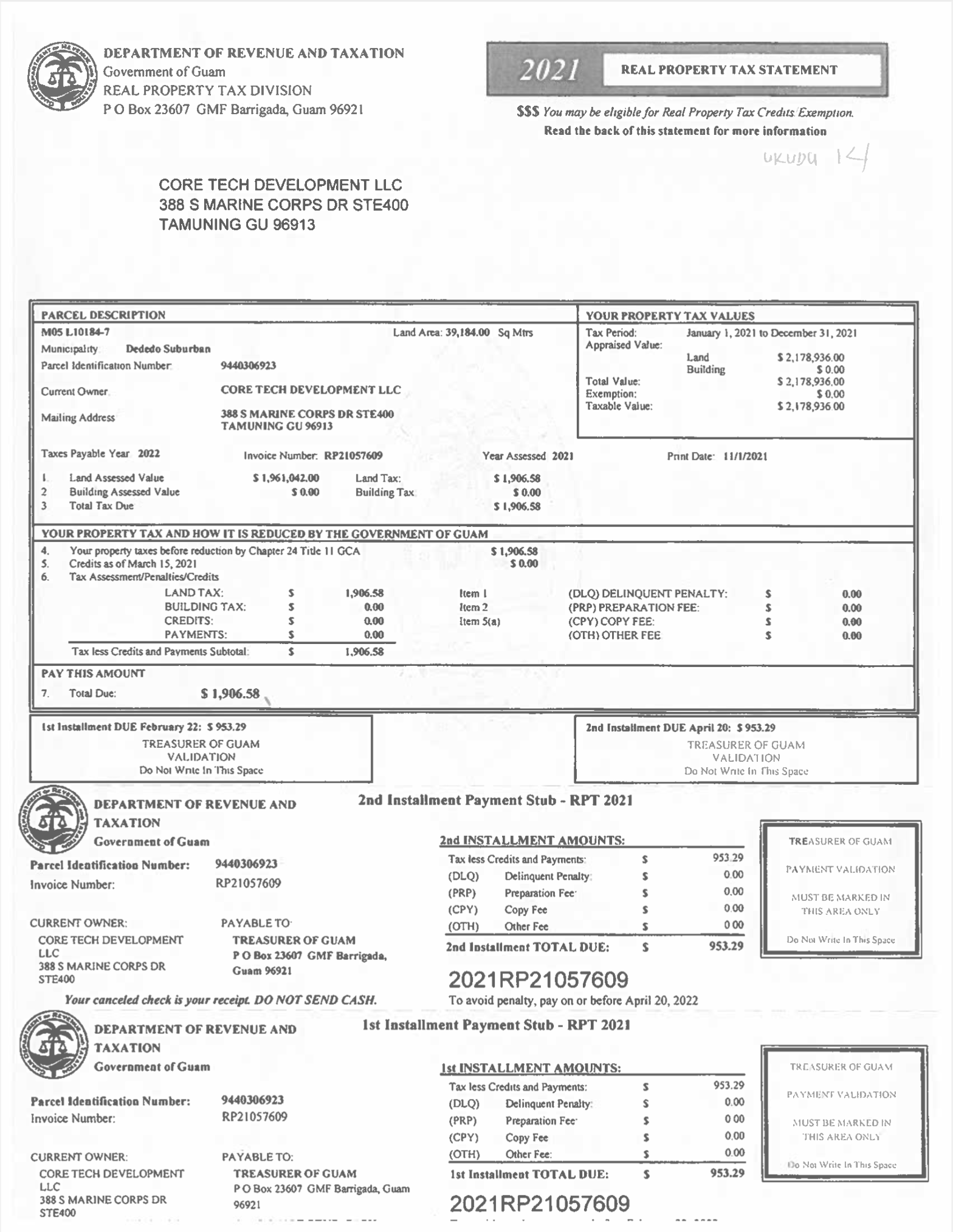