Michael Borja, the former director of the Guam Department of Land Management, took CoreTech International to court on the premise he held that CTI is not the rightful owner of a six-acre lot in the Harmon Annex known as Lot 10184-7.

Three title companies, a mortgagee’s deed, and a certificate of title all dispute Mr. Borja’s contention.

Lot 10184-7 isn’t just any ordinary piece of property. On it is a wastewater treatment plant and pipelines the U.S. military built and owner, until it leased then Congress eventually granted to GovGuam. That Northern District Wastewater Treatment Plan (NDWWTP) and its upgrade is considered to be one of the most important civilian infrastructure projects to the ongoing buildup on Marine Corps forces on island. It is so critical to the buildup, that it is the only infrastructure project singled out in the U.S.-Japan agreement that is the basis of a major global realignment of armed forces. It is the only civilian infrastructure project the government of Japan agreed to fund, to the tune of $140 million.

Imagine their horror, when Mr. Borja, then-director of land management, went to court suggesting GovGuam’s legal documents erroneously name CTI as the owner of the property and the plant.

But how erroneous are these documents?

In 2018, all three of the island’s title companies separately prepared what is called an Ownership and Encumbrance Report at CTI’s request. On the first page of each report, the following is reported:

“The following is a list of the real property(ies) owned by CORE TECH INTERNATIONAL CORPORATION, as of August 29, 2018 information derived from the Department of Land Management, Government of Guam. LEGAL DESCRIPTION: LOT NO. 10184-7, DEDEDO, GUAM” (no emphasis added)

“The search of said records shows Core Tech International Corporation, as shown on that Mortgagee’s Deed, dated and recorded on 04 May 2015 under Instrument No. 877948 at Land Management, as the last grantee.”

The Mortgagee Deed, recorded legally at DLM, transferred ownership from the previous owner, Younex, to CTI of several lots, including Lot 10184-7.

Transferred to CTI along with that deed is the Certificate of Title specific to Lot 10184-7, recorded as Document No. 801378 and signed by Deputy Registrar of Titles Andrew D. Santos on December 11, 2014. 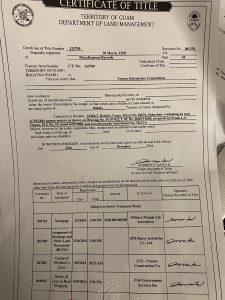 Mr. Borja, the former director of land management, who brought the lawsuit, contends the certificate of title was issued erroneously. What about the mortgagee deed? What of the millions of dollars CTI spent on the acquisition of that property, the legal documents from which were legally recorded at DLM itself? What of the millions Younex spent, when it purchased the property from the Torres Estate?

What of the laws of Guam, constructed following the federal Guam Excess Lands Act passed by Congress in 1994, that paved the way for the return of Lot 10184-7 and its sister properties to the Torres Estate and to others?

Did the government of Guam turn its back on public policy that has existed since the Ada administration concerning the disposition of federally-returned lands? And in a question that concerns the present issue of a lawsuit on land title brought about by the last administration’s land director: Why is the Leon Guerrero administration continuing this suit?