“This is to respectfully request an immediate investigation into what appears to be an egregious breach of ethical conduct that may have broken multiple criminal statutes, rules of the Senate and the American Bar Association’s Rules of Professional Conduct,” the senator began his letter to the heads of the CNMI’s bicameral legislature.

“I have received a document titled ‘Senate Impeachment Rules V6.1 Joey Edits,’ that shows ex parte communication between Governor Ralph Deleon Guerrero Torres’ personal legal counsel and the Senate’s privately retained Special Legal Counsel, Joe McDoulett,” Mr. Manglona wrote in a letter to Hofschneider and House Speaker Edmund Villagomez. “Visible in the document’s tracked changes are two edits made by the Governor’s personal counsel, Viola Alepuyo, on Page 15 on February 13, 2022 at 11:21 am, and two changes made on February 13, 2022 at 11:22 am.”

The edits made by Mr. McDoulett, he said and the document indicates, were made three days later, on February 16, 2022.

“The edits made by Mr. McDoulett were made three days later on February 16, 2022,” Mr. Manglona wrote. “This is a clear indication that the Governor’s personal counsel either drafted the Senate rules on behalf of Governor Torres or at the very least played a role in drafting, reviewing and editing the rules which were eventually adopted by the Senate Impeachment Committee and the Senate body as a whole on March 3, 2022.” 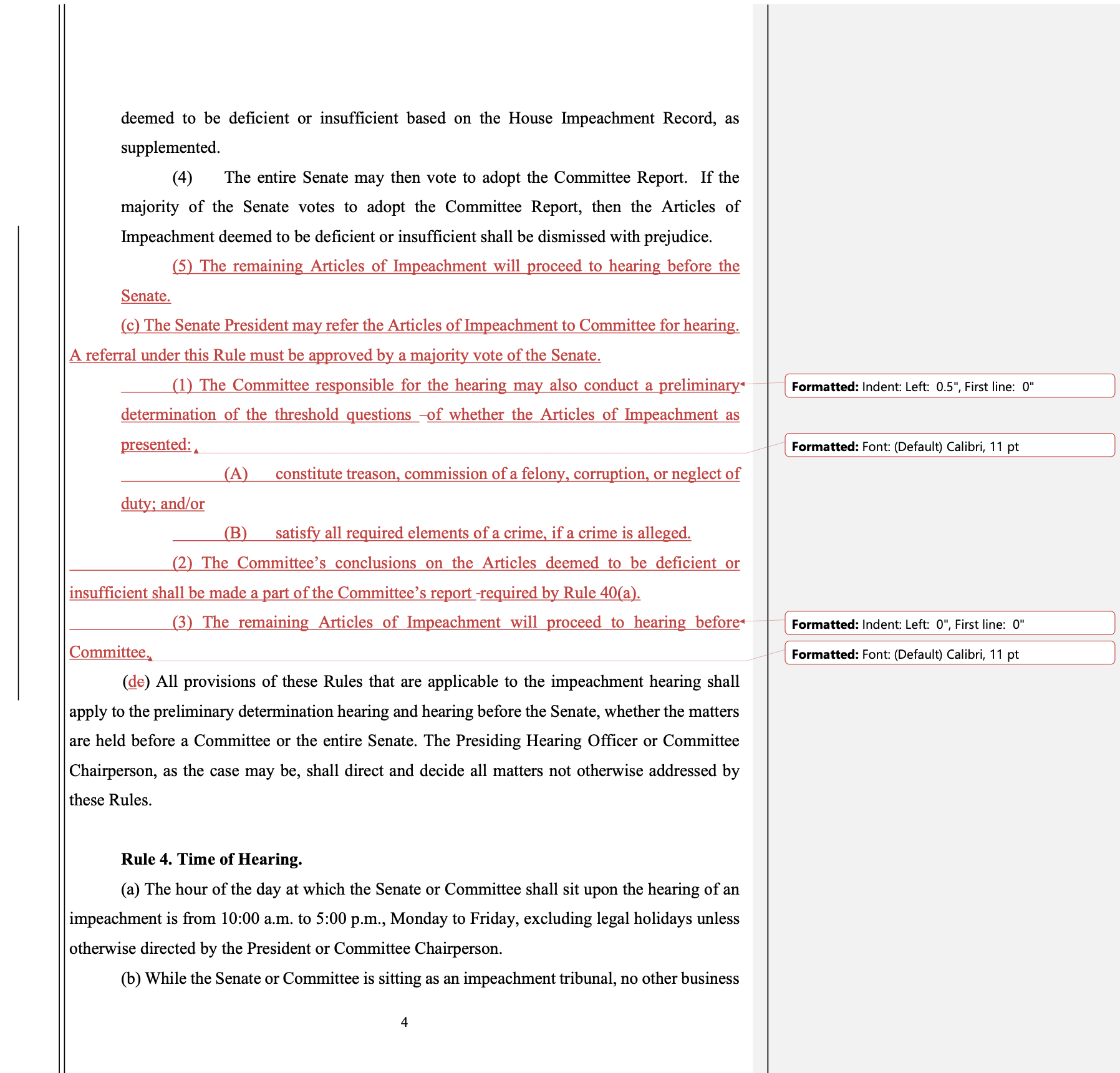 Among the edits the governor’s team made included the addition of language allowing a committee of the senate to decide a subjective threshold under which that committee may simply toss out the articles of impeachment.

Another change indicates Senators Hocog and Cruz deliberately wanted to prevent debate among senators. The margin of page 12 of the rules, under Rule 17, reads: “This was a change suggested by Senator Hocog and Cruz. As they did not believe we should open the door to a disagreement on when to start.”

On page 21, the governor’s cronies changed language that would have had hearing days agreed upon by both the impeachment prosecutor and defense counsel, and instead have those days directed by just one senator.

“Mr. President and Mr. Speaker, it would be improper for the Senate’s Special Counsel and the Governor’s personal counsel to work together to draft, review and edit the Senate’s impeachment rules. If this is indeed what happened, it would explain why the rules adopted by the Senate are weighed heavily in favor of the Governor.

“It would be negligent and a betrayal of public trust on our part if we do not investigate even the slightest appearance of impropriety given the contentious nature of the impeachment process. This demands your immediate action. At the very least, the people deserve to know who authorized the Senate special counsel to work with the Governor’s personal counsel.

“This letter serves as my formal request to our constitutionally recognized Senate legal counsel to identify which laws and rules were broken and provide the complete list of all instances when the Governor’s personal legal counsel and the Senate’s Special Counsel communicated and collaborated on the impeachment proceedings.