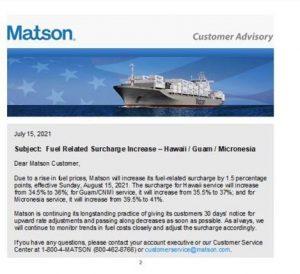 “The establishment, maintenance or use of a monopoly, or an attempt or conspiracy to establish a monopoly, of trade or commerce in a relevant market by any person, for the purpose of excluding competition or controlling, fixing, or maintaining prices is unlawful.” – §69.20 of the Antitrust Law of Guam

Get ready for higher prices. Matson is scheduled to raise its fuel surcharge yet again this Sunday.
According to a notice given to customers last month, Matson will raise its fuel surcharge for its markets in Hawaii, Guam, the CNMI, and the rest of Micronesia.
“Due to a rise in fuel prices, Matson will increase its fuel-related surcharge by 1.5 percentage points, effective Sunday, August 15, 2021,” the July 15 customer advisory states. “The surcharge for Hawaii service will increase from 34.5% to 36%; for Guam/CNMI service, it will increase from 35.5% to 37%; and for Micronesia service, it will increase from 39.5% to 41%.”
The current price range for shipping a container through Matson on the Guam/CNMI trade is $7,000 to $9,000. By comparison, APL (Matson’s only competitor in the region) charges only between $4,000 to $6,000 per container.
In a lawsuit recently filed in federal court in Washington, D.C., APL has alleged that Matson has threatened some of its customers that if they ship through APL, Matson will offer lower rates to its customers’s competitors.
“Matson actually followed through on its unlawful threats to shippers. APL understands Matson significantly increased rates specifically to its shippers that placed cargo with APL, and Matson refused to promise on-time deliveries for shippers that booked cargo with APL,” the APL lawsuit alleges. “Matson’s threats and punishment of shippers further disciplined them from doing business with APL, hindering its ability to compete fairly in the U.S./Guam markets.”
The conduct APL alleges Matson has engaged in is against both federal and local law.
According to the Guam Antitrust Law (codified at Chapter 69 of the island’s criminal code), “A contract, combination, or conspiracy between two (2) or more persons in restraint of, or to monopolize, trade or commerce in a relevant market is unlawful.”
§69.15 of the statute also provides: “A contract, agreement, combination or conspiracy which controls or attempts to control the quantity, price or exchange of any article of manufacture, product of the soil or mind or any goods or services in restraint of trade is unlawful… Secretly paying or allowing rebates, refunds, commissions, or unearned discounts, whether in the form of money or otherwise, or secretly extending to certain business consumers special services or privilege, not extended to all business consumers purchasing upon like terms and conditions, to the injury of a competitor and where such payment or allowance tends to destroy competition, is unlawful “
375
Share
FAVORITES
By Troy Torres Posted on: Tuesday, 08/10/2021 4:31 PM Money 1 comments
375