You may have noticed a concerted effort by political employees of the Leon Guerrero administration to discredit the governor’s challenger for the seat she wants to retain. A message from within the governor’s administration and campaign states Gov. Lou Leon Guerrero herself ordered the creation of a Facebook troll farm in February. But her campaign manager says what you’re seeing on social media is organic, and not an orchestrated campaign activity.

The governor’s former public transportation chief – retired U.S Air Force master sergeant Celestin Babauta – produced evidence showing that in February, an administration official tried to recruit Mr. Babauta into a troll farm for the Lou & Josh 2022 campaign. The official also wrote in his message that the task was given to him by Gov. Lou Leon Guerrero herself.

According to Oxford Languages, a troll farm is “an organization employing people to make deliberately offensive or provocative online posts in order to cause conflict or manipulate public opinion.”

According to the February message Mr. Babauta produced from the administration official, “The governor tasked me to create a Facebook response team. I would like to add you to our team as our duty would be to dominate the governors (sic) Facebook posts and create our own content to support the re-election of Lou and Josh!”

“He was appointed by the governor according to his text message to me,” Mr. Babauta told Kandit. 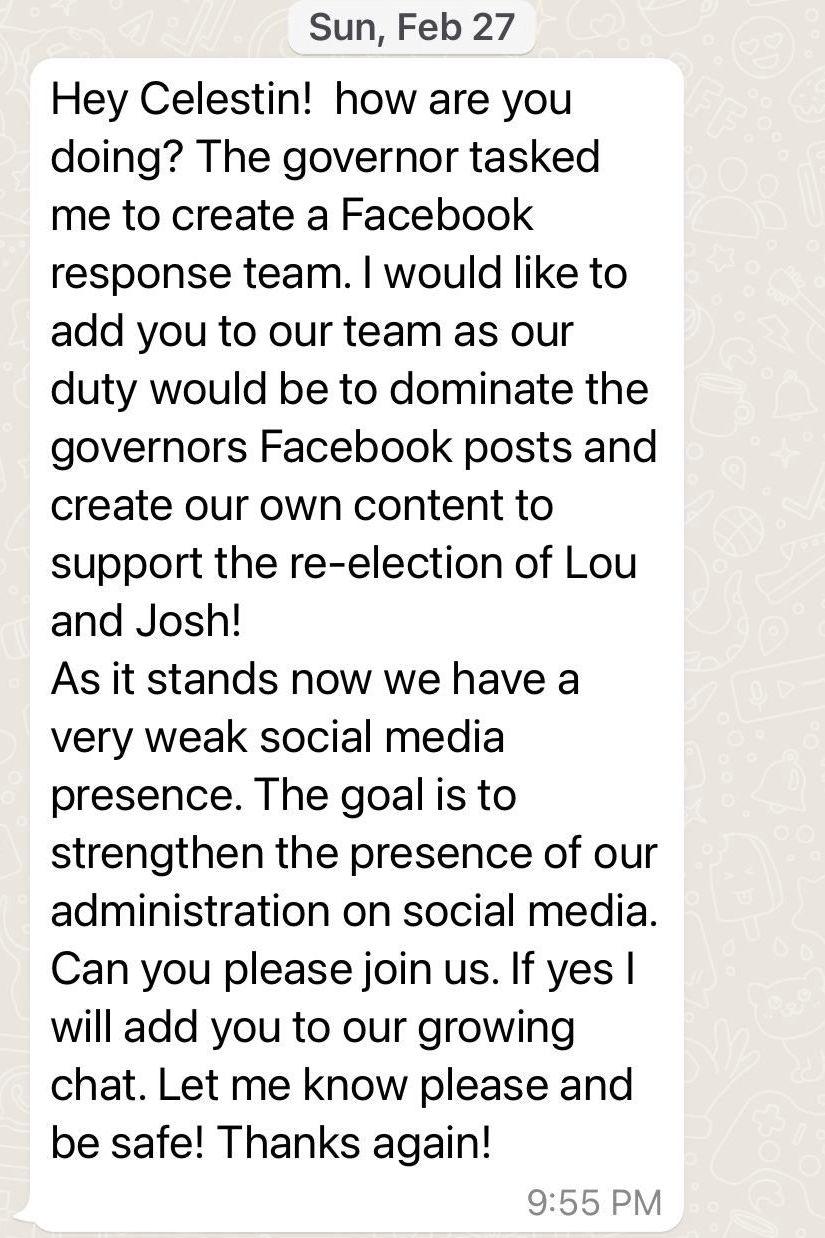 By February this year, rumors were swelling that Congressman Michael San Nicolas would challenge Ms. Leon Guerrero for the August 27 primary election that will determine which of the two democrats will challenge Felix Camacho for governor in the November general election. This period also coincides with a rapid escalation of negative posts and commentary by numerous cabinet members, governor’s office employees, and other political employees of the executive branch. Their targets are not relegated simply to Mr. San Nicolas and his running mate, but also against anyone who comments in support of the congressman.

And many of them have begun to attack Kandit since the author of this story has made no secret of my support of the congressman’s bid for governor. (Let’s not pretend like people who write stories don’t have political biases; best to be honest about those biases).

The governor’s campaign manager made sure to point out that bias as part of his statement responding to several questions Kandit asked him about the governor and her campaign’s involvement in any troll farm.

Kandit asked Mr. Respicio, “Did the governor in fact task her cabinet member to create a ‘Facebook response team?’ If not the governor, did anyone in the campaign instruct [him]? Was anyone else instructed to be part of this team?” We presented Mr. Respicio with several names of government political employees, who constantly attack San Nicolas and his supporters, asking whether they are part of this ‘Facebook response team.’

“We have very enthusiastic supporters who want to balance the slanted posts and negative and false narrative that is being put out on social media,” Mr. Respicio said. “These individuals, who you pointed out, have courage because they are using their name and not in hiding. The Governor herself is not personally involved in these efforts. This is all happening organically and the Lou and Josh supporters working as part of the campaign may reference the Lou and Josh team, but their volunteer efforts are their own. It’s a free country and people organizing themselves and voicing their opinion on social media is a standard part of any campaign season on Guam. Kandit publicly declares its preference for certain political camps and encourages its online supporters to weigh in which itself is a violation of media ethics. There is a contrast to be made, even in your line of questions that our campaign is providing the facts, working tirelessly to set the record straight and correct our opponent’s spin on the truth and misinformation. It’s all happening organically, and we are very proud about the many caring intelligent and passionate supporters we have on social media.”

Asked again whether the governor herself instructed the creation of the ‘Facebook response team,’ Mr. Respicio responded, “You’ll have to talk to Bobby about it.” Bobby is the nickname of the administration official who sent Mr. Babauta the February message.

Pressed further for a direct answer, Mr. Respicio referred me back to his written statement above.

Mr. Babauta is suspicious these personal attacks and negative political activities are being performed by government of Guam political appointees during working hours.

“The legislature should prohibit GovGuam employees from engaging in these kind of activities,” Mr. Babauta said. “If somebody should take a look at the remarks of [these employees] and distinguish the times and the dates of the remarks they’re making, some of these might be during working hours, which would not be an allowed activity. Those activities should cease and desist, especially those working for GovGuam. It’s a shame really for GovGuam to employ people who are engaged in those activities.”

Troll farms are so notoriously damaging to free elections that four days ago, the U.S. Department of State issued a $10 million bounty for the identification of Russians using them to interfere in United States elections.

“Social media as an information platform expands the reach of psychological operations so considerably that it rises to a level of prohibited intervention,” an article about troll farms in the Georgetown Law Review states. The British have seen the rise of these troll farms as such a threat to democracy and national security, that parliament has proposed to criminalize these activities.

A series of Facebook pages began propagating in February, all with the characteristics of a foreign-driven troll farm. Every single one of these pages posted articles from anti-Michael San Nicolas online sites suspected to be associated with the Lou & Josh campaign. Page members included governor’s office employees, Leon Guerrero cabinet members, and campaign officials, among others.

Asked whether the Lou & Josh campaign is “employing any resources from any foreign nations to aid in its social media campaigns,” Mr. Respicio responded, “My answer is in my statement.”

I replied to Mr. Respicio, “Your statement doesn’t deny the use of resources from any foreign nations to aid in social media campaigns.”

He replied, “Now you’re just fishing to build a story where a story doesn’t exists (sic).”

I told him, “No, I’m just asking for direct answers.” He replied, “I did answer. Read my statement.”

The use of foreign resources to affect an election anywhere in the United States, including its territories, is against federal law.