A man from a humble corner of Talofofo, and a proud daughter of Agat today began their campaign to change Guam. The island’s voters will be sending a clear message if they elect Michael San Nicolas and Sabrina Salas Matanane to be the governor and lieutenant governor. Their opponents – both scions of their parties and the establishment of elites on Guam – are a former governor and an incumbent of the same political party. 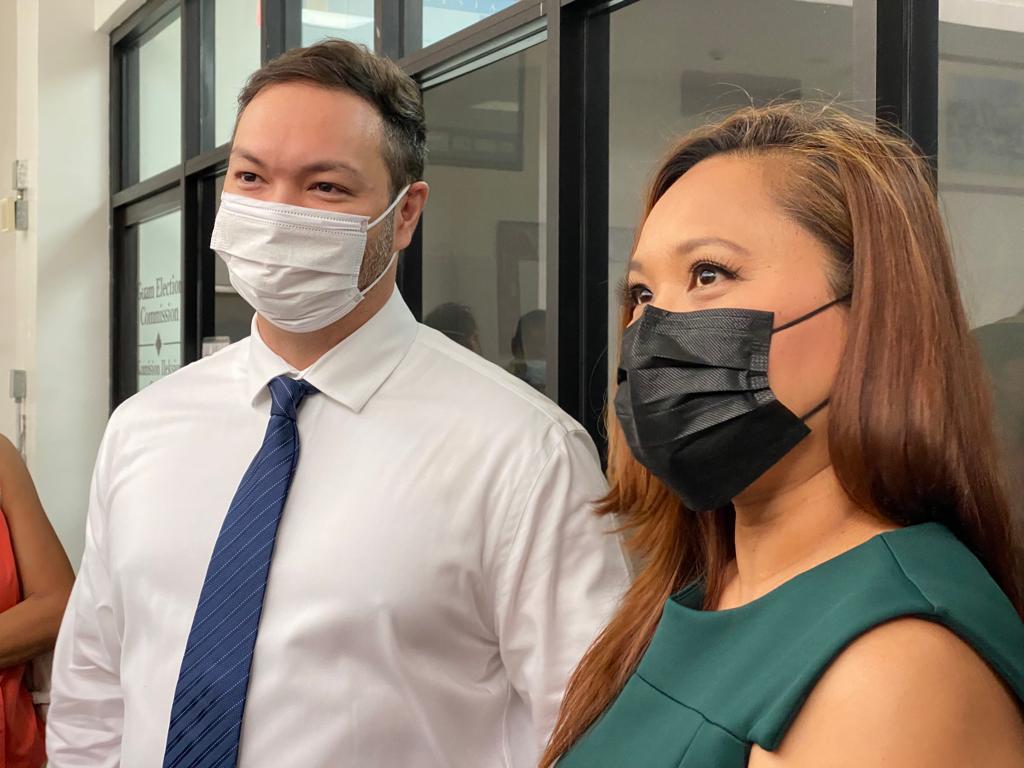 And if elected, they will be the youngest Adelup tandem elected, the first from the south, and the first gubernatorial team to come from the same economic struggle as the majority of the people of Guam.

Perhaps that’s what makes their reform-minded pledge of change convincing. They don’t just talk about change. They are, in fact, different from all the rest.

“We’ve had two gubernatorial tickets declare their candidacy, and neither of them are talking about the people of Guam,” Mr. San Nicolas, Guam’s congressman, said after he and Ms. Matanane signed out their official candidacy packet.  “There’s been no discussion about what’s going to happen for our people. No discussion about what the next four years are going to bring. No discussion about how the lives of our people are going to improve. That is not public service. We’re just so grateful, where we have a day like this. Where we’re able to bring the focus away from the negativity; away from the politics; away from the distractions; and back on the people.”

That negativity has consumed Guam politics in what appeared to an all-out effort in the doldrums and desperation of San Nicolas’s haters to keep the man from running for an office that voter polls consistently show him sweeping. And that was before he even announced his intention to run for governor.

“It’s time for us to put this all to rest, this kind of politics; this kind of neglect of our people,” Mr. San Nicolas declared. “How do we have a primary election that’s less than five months away, and no one is talking about the people? We’re going to bring that conversation.”

In between the question and answer period, you can see him glancing at a phone his assistant, Benjie Perez, was holding up. On it was his lovely wife, Kathryn Ko San Nicolas, and their two beautiful young children, who are in Washington, D.C. They were beaming with pride and excitement and blew kisses every time he looked at them, smiled, and waved.

And then a familiar voice spoke; a voice we went to for three decades for the truth after a long day of crime, corruption, and business as usual in the government of Guam.

For 25 years, Ms. Matanane brought us the unvarnished and dispassionate truth of government without the color of her opinions. Today, like a dam breaking 25 years of holding back, she said for the everyday Guamanian what may very well be in the average voter’s mind:

“I’m tired… I’m tired of the negative politics,” she said. “I’m tired of hearing about good people who want to step up and run for public service, but in fear of political retribution, fear of attacks on their family, they’re scared! They step away. I’m scared. I’m not going to lie. I am terrified. But at the end of the day, I lost my job, I lost my car, I lost my health insurance. I lost everything. But the risk is worth it. And that’s why I’m here.”

These were not the words of a politician, but of a working woman, wife, mother, and daughter who has shined the light on the dark crevices of this island, and now steps into the spotlight to do something more about it.

Indeed, she didn’t just trade in her career for the prospect of public service if the voters will have her. When she left KUAM, she had to turn in her cell phone and leave the keys to the company car. Hopefully she won’t need medical care between now and October 1, when her husband – a Guam Fire Department firefighter – is next able to carry her on his health insurance plan after the next open enrollment. It was he and their daughter, who brought the candidate to the Guam Election Commission offices as the Oka Center in Tamuning today.

They pulled up next to the two-door Prius Mr. San Nicolas drives, and bereft of any of the designer clothing or bags most politicians dangle, these two southerners walked into the building to quite possibly set a course in our history we are not used to; one that places regular, everyday struggling Guamanians first.

And despite not serving a day in government, she gets it more than others.

“I have read documents from just a month ago about how we have $320 million just sitting in a bank,” she said of the incredulous dichotomy between GovGuam’s riches and the suffering of the average citizen. “Why aren’t we putting that money out to help people?”

She accused the Leon Guerrero Administration of using these federal funds her running mate secured for the people of Guam as a form of political bribe in this election year, rather than using the money on programs that provide meaningful help to struggling families.

“I wouldn’t be surprised after we leave, there’s a press release coming out [that says], ‘Hey, we’re gonna give out bonuses’ or whatever.”

The ‘change’ theme resounded from this team, which – on the fly and when asked by the GEC official helping them to fill out their forms – coined their abbreviated reference (Jeez, they have long names): Mike & Bri 2022. ‘Bri,’ the short form of ‘Sabrina,’ is how her friends know her. When asked how she wanted voters to know her, she didn’t hesitate (Mr. San Nicolas, the gentleman he is, yielding to her to decide the reference): “I like ‘Mike and Bri,’” she said.

The change this team wants to lead is far more serious than programmatic or seasonal. It is transformational. ‘Depth’ would be a cheap was to explain how far it goes.

“We have so many issues currently, present, dealing with this pandemic and hundreds of millions of dollars in resources not getting out to our people,” he said; a lamentation shared across the dinner tables of this island. “We’ve been talking about how there’s so many needs out there. Businesses have been closing. Poki Fry is gonna close. Game Stop has closed. How many businesses will close before we realize that there’s not enough relief getting to where it needs. That conversation needs to happen and it needs to be ongoing.”

He spoke to life after the pandemic, and hinted at the reform their team would bring. This discussion of actual issues harkened to what he said as soon as the team left the GEC office about his opponents’s lack of discussion on the issues.

“This election isn’t just a pandemic election,” Mr. San Nicolas proclaimed. “We need to be talking about health, education, public safety. But not just in the context of how those are important, and creating all these promises that never actually happen. But, what material things can we do to really achieve outcomes in those areas. How can we make sure that we’ve learned from this pandemic? We look at where there’s overlap in personnel that could be going places that are more needed, and get them there.

“How can we look at housing and make sure the affordable housing problem isn’t just something that we all sit back and acknowledge, but instead create the incentives for builders to actually build houses at lower prices?

“How do we go about making sure that the education system isn’t just able to open up and take in students, but to actually push out students to be able to get high-paying jobs, and attracting industries that create those jobs. We need a school of technology at the University of Guam. We need financial education at our Department of Education. We need a home for our police officers. We need to make sure they’re getting the resources they need to fight the drug problem. We have all these checkmarks and all these types of conversations we need to have. We’re so ready to have them.”

Adelup responded to the tectonic news that Gov. Lou Leon Guerrero and Lt. Gov. Joshua Tenorio now are challenging a primary election opponent considered the frontrunner of the whole election:

“Our democracy empowers any eligible member of our community to run for elected office, and we look forward to productive and positive civic engagement,” communications director Krystal Paco-San Agustin said. “Governor Leon Guerrero and Lieutenant Governor Tenorio remain focused on leading Guam’s recovery, moving our island forward, and securing our path to prosperity for the People of Guam.”

“There’s just so much we need to change,” Mr. San Nicolas said at the announcement. “I think the biggest thing we need to change first is the ‘why?’ Why are people running for these offices? Where’s your heart at, and what’s your purpose?”

He touched lightly, but without naming his assailants, on the barrage of negative and personal attacks against him since rumors emerged two years ago he would run for governor in 2022.

“All these things that I’ve been dealing with congressionally, that have been trying to distract us from our purpose… and remember, that’s not where our focus was at,” he said, “that’s how we were able to achieve so much. That’s how we’re able to accomplish so much. Check off things people thought we would never be able to do. Because we stayed focused on our priorities. The biggest thing that needs to change is the purpose. If you’re this far along as the sitting governor, or someone who’s declared to run for this office and you haven’t been talking about the people, then clearly, there’s a lack of purpose. That’s the biggest thing that needs to change. We need to focus the purpose of everything we do as elected officials, of everything we do as a government, back on the people.