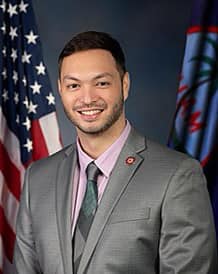 Congressman Michael San Nicolas has entered the fight to have ancestral lands at Fadian condemned and held by the U.S. Navy since 1950 returned to the pre-condemnation owners and their heirs.

In a letter this week to Gov. Lou Leon Guerrero, Mr. San Nicolas has echoed the refrain from 18 families, who have a claim to 102 acres of land the governor wants to take for the proposed Guam Medical Complex: Why are you not following the law with respect to lands declared excess by the Navy?

The congressman’s entry into the issue is pivotal, not just because of the weight of his popularity, but also the weight of his office. The foundational statute guiding the demands for the return of the property is a federal one: the Guam Excess Lands Act. The GELA has been followed by a series of local laws, and most recently by Section 2847 in the 2019 National Defense Authorization Act, “that mandates the Secretary of the Navy to return excess lands, and further authorizes your office to petition fro the return of specific parcels determined to be excess,” Mr. San Nicolas wrote in his January 17, 2022 letter to the governor.

Referencing reports in the media covering the issue and exposing a license granted by the Navy to the government of Guam as a transition toward a 100-year lease for GovGuam to build its medical complex, the congressman wrote, “The fact that the article indicates a willingness of the U.S. Navy to lease said lands ‘long-term’ indicates that they would be ripe for consideration as excess, thus making them subject to return. In fact, in the attached letter from the Secretary of the Navy dated January 15, 2021 it appears to indicate a willingness to return parcels for the purposes of constructing a medical complex.”

Kandit has previously published that letter and others disclosed following a Freedom of Information Act release of communications between Adelup and the Navy.

”I am pleased to now identify the DoD parcel for the medical complex, and add it to the list of parcels eligible for return to the Territory of Guam,” Navy Secretary Kenneth Braithwaite wrote to Ms. Leon Guerrero January 15 last year.

According to Guam law, which was referenced in a 2002 Quitclaim Deed returning other federal parcels through the GELA, lands declared excess by the federal government must go through a process leading to the return of the land to the pre-condemnation owners, or their heirs if the ‘original’ owners are not living.

”Is the intent of a lease a means to circumvent local law that would require just compensation to original landowners for the use of the said property?” Mr. San Nicolas asked the governor in his letter. “Why are you pursuing a lease of these lands when federal statute provides a mechanism for the outright return of these lands?”

The land claimants themselves have spoken in opposition to the governor’s plans and told the legislature, in an oversight hearing held by Speaker Therese Terlaje, that they were never even consulted by the governor. Ms. Leon Guerrero made public comments that the original landowners were justly compensated at the time of the taking, but documents show those families were paid pennies on the dollar for the estimated value of the land in 1950.

The congressman’s letter holds greater consequences for another party in interest: the Navy.

”It would likely be of serious concern to the federal government if it was a party to a willful transaction intended to circumvent local statutes mandating just compensation to original landowners for lands deemed in excess,” the congressman wrote.

A Naval spokeswoman on Guam previously has indicated the Navy is committed to working with the governor on what she prefers to do with the land.

Meanwhile, Oka Point has been available for decades for use as a future hospital site.