A coalition of Republican and independent CNMI House members, who have declared their allegiance to either Gov. Ralph Torres or Lt. Gov. Arnold Palacios, have allowed the governor to continue forcing the Commonwealth’s taxpayers to foot the Torres family’s private bills. CNMI House members discussed then unsuccessfully attempted to override the governor’s veto of a budgetary provision that would have outlawed his abuse of public funds to pay for his private utilities expense. Eight supporters of either Torres and Palacios blocked the vote.

The Commonwealth Legislature last month passed a Fiscal Year 2022 budget that included language to prohibit the government from paying for the private utilities expense of any public official. The governor line item vetoed that provision. Friday morning, House Ways and Means committee chairman Rep. Donald Manglona (I-Rota) made a motion to override the governor’s line item veto of that section.

“The Department of Finance practice of authorizing not just one, as the JGO hearings have shown us, but several residences of the governor alone – none of these charges are authorized by law and should be ceased immediately,” Rep. Leila Staffler (D-Saipan) said.

Ms. Staffler was referring to the House Judiciary and Governmental Operations committee corruption investigation discovery that Commonwealth taxpayers had been footing the bill for Mr. Torres’s utilities since Gov. Eloy Inos died and Torres ascended to the position. Evidence shows Mr. Torres has consumed far more than the average residential consumer – in one year more than $100,000 in utilities usage in which one month’s bill was paid at more than $16,000 – and all of it was charged to and paid by the taxpayers. The charges were paid on at least three utilities meters at two separate residences, one of them belonging to the governor’s sister.

Asked during the hearings whether he receives a utilities allowance, Lt. Gov. Arnold Palacios told the committee he does, but that his consumption is a sliver of a fraction of the governor’s. He implied several times during the course of his testimony that Mr. Torres had grossly abused his privilege as the Commonwealth’s chief executive. Despite Mr. Palacios’s position on the matter, at least two of his supporters in the legislature – Representatives John Paul Sablan and Blas Jonathan Attao – joined Torres’s republican allies in voting against the override motion.

“It would be irresponsible of us not to acknowledge the abuse of public funds when it comes to paying the utilities that the JGO committee has uncovered under chairwoman Celina Babauta’s leadership,” Rep. Sheila Babauta (D-Saipan) said. “Because the governor’s reason for line item vetoing this language is, basically, ‘because it’s been done in the past, and the housing units on Capitol Hill are not in living condition,’ we believe that is not reason enough to continue this kind of abuse. Members I do ask for your support, I support overriding this veto. We can model responsible governance; we can model accountability.” 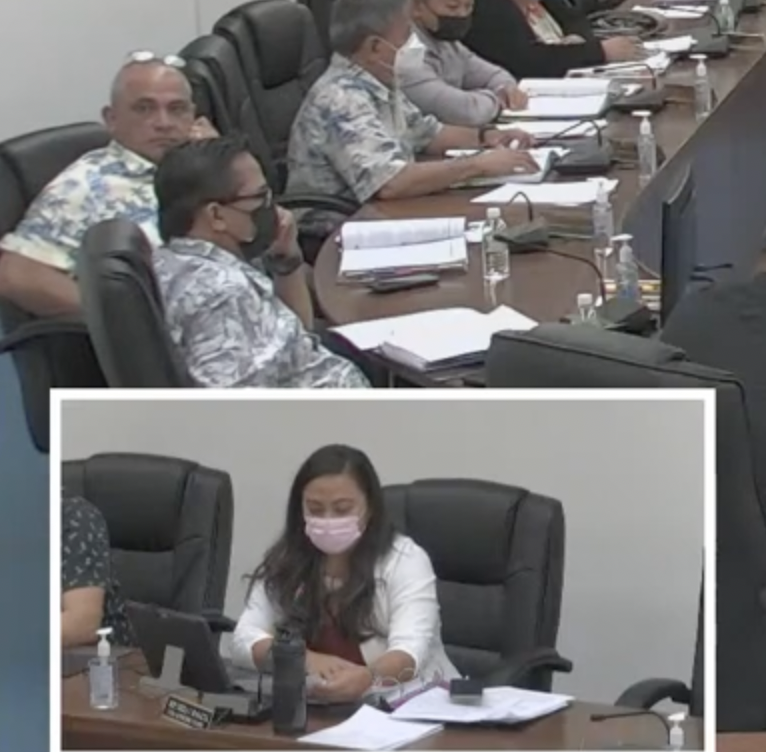 Sheila Babauta asked her colleagues’s indulgence while she explained the significance of the prohibitive language itself, to which Rep. Joseph Flores was seen on camera appearing to roll his eyes and scoff. Despite the reaction, Ms. Babauta read the amendment to the current statute (Title 1, Division 8, §8221 – §8223), which states “The personnel office shall designate houses for permanent residence for,” the four positions. The four positions include governor, lieutenant governor, senate president, and speaker of the house. According to Ms. Staffler, the permanent residences for governor and lieutenant governor are two homes designated on Capitol Hill, which have not been used as the residences since the 1990s. No where in the statute does the law allow for the expenditure of public funds for the utilities expense of private residences of the four positions.

“Mr. Speaker, I don’t mean to put you on the spot, but are you paying for your own utilities?,” Rep. Ed Propst asked Speaker Edmund Villagomez, to which the speaker quickly replied, “Yes.”

“I’ve been in the military for 22 years and I’ve never seen anyone like this given utilities allowance like this,” Rep. Richard Lizama said. “There’s no such thing. We need to override this [veto].”

“Just because it (utilities allowance) was paid in the past, doesn’t mean that it was the right thing,” Rep. Corina Magofna said. “As our law states, there’s actually nothing in there that says that practice is allowed. I would like to ask our colleagues, ‘What does your conscience say? What does your principles say about this practice?’ I’d like to ask that you support this override.” 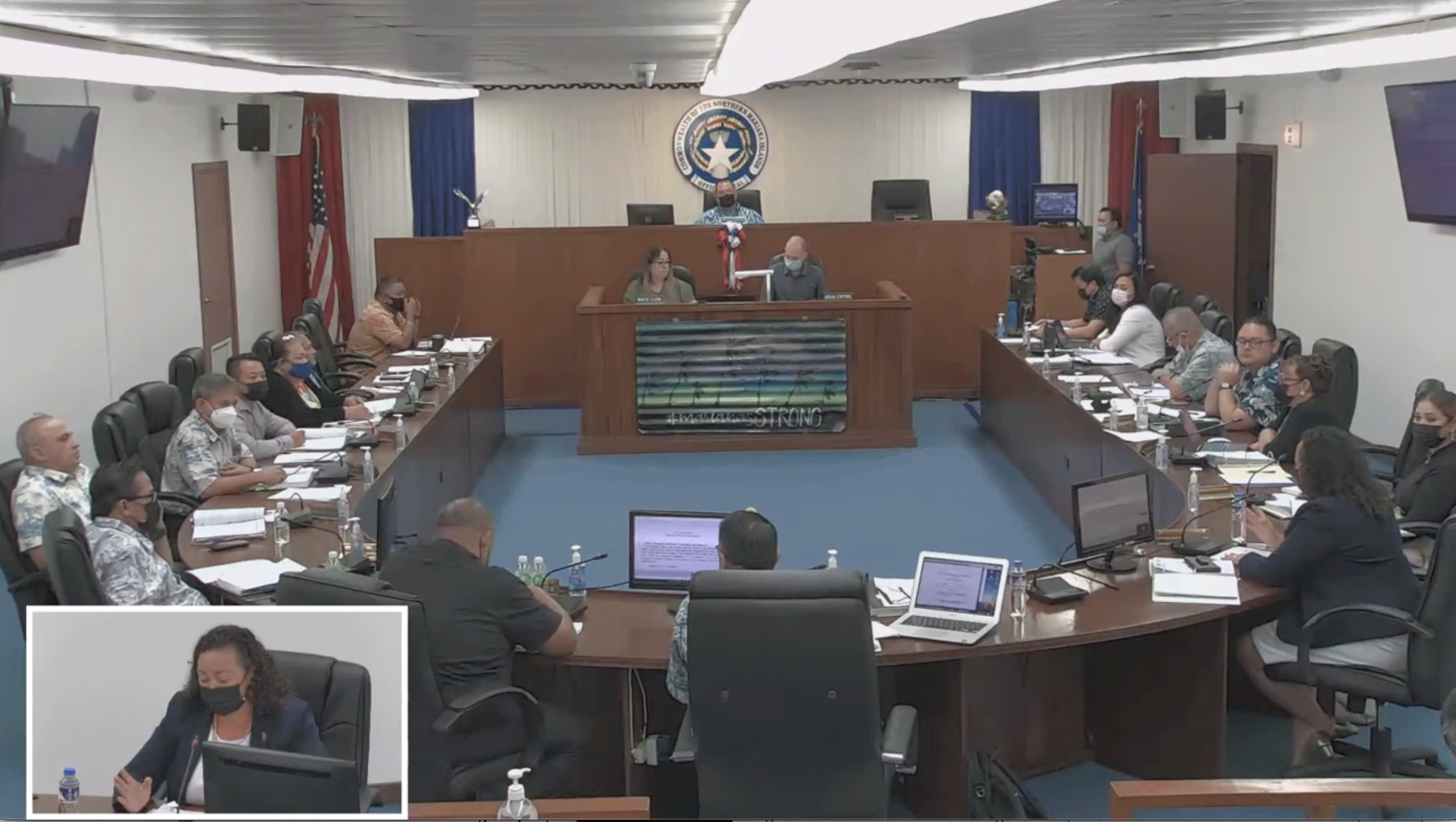 According to the CNMI Constitution, in order for a gubernatorial veto of a statute to be overridden, two-thirds of the membership of each house of the legislature must vote to override the veto. For the House, which has 20 members, 14 votes are needed for any override. At Friday’s session, 19 members were present, with Rep. Tina Sablan (D-Saipan) off island. The vote count on the override motion follows:

Mr. Speaker, 11 have voted ‘yes,’ eight have voted, ‘no,’ and one member is absent,” House Clerk Linda Muna read into the record.

“Thank you, Clerk,” Mr. Villagomez began. “With 11 voting ‘yes,’ and eight voting ‘no,’ and one member absent, the override for this line item veto was unsuccessful and does not pass.”

Illegal use of line item veto

While the legislative language prohibiting the utilities expense was written into the administrative provisions section of the budget, there is no corresponding appropriation in the budget funding the expense itself. If the expense was part of the governor’s office budget itself, Mr. Torres failed to line item veto (reduce) the corresponding appropriation. The language, however, arguably is not an administrative provision, but a statutory rider to the budget bill; a stand-alone statute appended to the budget act, and for which the legislature has plenary authority to enact. In such a circumstance, a line item veto is inapplicable.

Kandit has emailed chairman Manglona for response to the possible invalidity of the governor’s veto.