“This legislation is ultimately about improving the lives of the CNMI’s working families and making the Marianas a place where workers’ rights are protected and legitimate businesses can operate on a level playing field.

“House Bill 22-98 also helps workers by extending the statute of limitations and removing other obstacles for pursuing claims under the Wage and Hour Act, stiffening the penalties for employers who cheat their employees or retaliate against them for filing complaints and repealing minimum wage exemptions in the law that discriminate against certain categories of workers, including elderly workers, domestic workers, and workers with disabilities.” -Tina Sablan 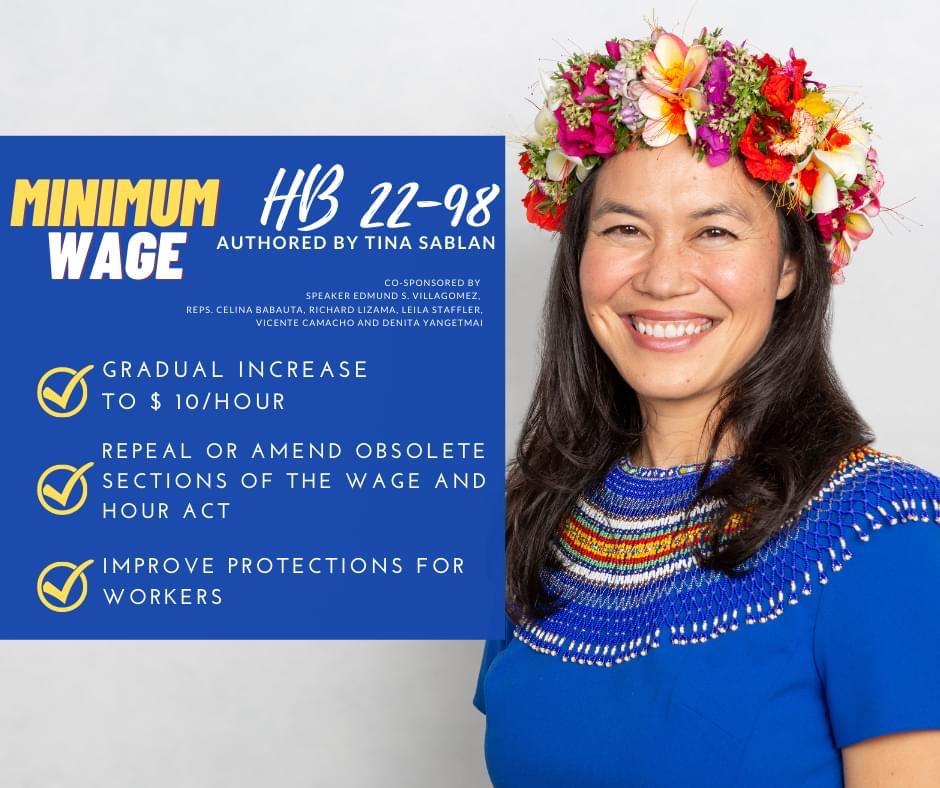 The following is a news release from the CNMI House of Representatives:

The CNMI House of Representatives Health and Welfare Chairwoman, Christina Sablan, (D-2) introduced legislation Tuesday afternoon that seeks to raise the minimum wage by $0.55 increments within 120 days of its passage, and every year thereafter until the minimum wage is $10 per hour.

The incremental increase is similar to the approach taken with the application of the federal Fair Minimum Wage Act of 2007, which recognized the need to raise the minimum wage to fairer, more livable, and more competitive levels, while also taking into account uncertain economic conditions and the need of local employers to have time to adjust.

“This bill is about encouraging work, improving the lives of the CNMI’s working families, strengthening workers’ legal rights and holding cheating employers accountable, and ensuring that wages in the CNMI are fair, decent, and competitive,” Rep. Sablan said.

Work on the legislation began in 2021, when Rep. Sablan reviewed workforce and wage data available for the CNMI, including prevailing wage studies and GAO reports, surveyed wage laws in other states and territories; consulted with labor lawyers and advocates, and considered the enforcement challenges and recommendations from workers and both federal and local labor officials.

“According to the 2021 prevailing wage study, the median hourly wage in the CNMI is
$9.97. This means that half of the CNMI’s workers are already earning $9.97 per hour or more. A GAO report on workforce trends in the Marianas released last February indicated that more than 94-percent of the CNMI’s workers are already earning more than the minimum wage of $7.25 per hour, and that a hypothetical minimum wage increase to $10 per hour would affect half of the current workforce,” Rep. Sablan said.

Federal minimum wage levels have not increased from $7.25 per hour since 2007, and most states have implemented minimum wages that are higher than the federal level. While Guam’s minimum wage is set to increase from $8.75 to $9.25 per hour by September 2022, there have been no minimum wage increases in the CNMI since 2017, where the cost of living is significantly higher than many other jurisdictions.

Rep Sablan said House Bill 22-98 repeals or amends outdated sections of the CNMI wage and hour law that discriminate against workers with unpaid wage claims and certain categories of workers, including elderly workers, domestic workers, and workers with disabilities.

House Bill 22-98 also takes aim at the extremely limited window of time for workers to file claims for unpaid wages or other compensation owed to them. Under the current statutes, works are allowed just six months after the last occurring violation, or within 30 days after termination of a contract to recoup unpaid wages.

“It often takes more time than that for workers to realize that their rights have been violated and that they are owed money, and to understand and navigate the process for filing complaints. Over the years, many workers in the CNMI who have been cheated by their employers have had their claims time-barred and dismissed. With this legislation, we extend the time for filing claims to six years, similar to Hawaii,” Rep. Sablan said.

House Bill 22-98 also tackles the issue of wage theft, where employers who cheat their workers hurt not only the workers and their families, but also the reputation of the Commonwealth.

“We want the CNMI to be a place where workers’ rights are protected and where legitimate businesses can compete on a fair and level playing field. This legislation stiffens the penalties for bad actor employers who violate wage and hour laws, including employers who retaliate against workers who file complaints,” Rep. Sablan said.