Home >> Senators quiet on land scams that could cost each Guamanian up to $1,307

Senators quiet on land scams that could cost each Guamanian up to $1,307

Every Sunday at Mass one of the lectors petitions Jesus Christ to hear our collective prayers, among them that civic leaders act with justice and mercy. If there’s anything I’ve learned from the likes of Tim Rohr, Bob Klitzkie, and my Auntie Ernie Perez, it is that oftentimes justice requires our action, and not just prayer.

Over the past several weeks Kandit has been exposing a series of questionable and arguably illegal land transactions. From the mess Guam Waterworks Authority has made of its land grab and encroachment related to the Northern District Wastewater Treatment Plant to the bizarre circumvention of ancestral lands laws so the governor can build a $1 billion medical campus near Eagles Field, a lot of money is at stake.

These two land scandals, when all is said and done, have the potential to cost us, taxpayers, more than $200 million in additional costs simply to satiate whatever grand plan GWA and Gov. Lou Leon Guerrero have. The rightful owner of the land, where the NDWWTP sits, CoreTech International, is suing the government of Guam for its encroachment and for inverse condemnation of its properties in the surrounding areas. That doesn’t even figure in the potential for the other landowners in the Harmon Annex to join suit.

As for the back road medical campus, experts in the field estimate it will cost upward of $100 million to prepare the site for a hospital: water and power infrastructure, road widening and hardening, environmental impact mitigation, etc.

But why is Kandit doing all this research? Isn’t this the job of the Guam Legislature? Seriously. Aren’t senators supposed to be all over stuff like this? We’ve elected them to be our first branch of government; the more powerful one, because it’s the one that is supposed to directly reflect and represent us.

But where is their representation in this regard? More than $200 million is no small amount. Divided by the population of Guam, that’s $1,307 from every single Guamanian, or the gross receipts taxes we each would pay on $26,143 in groceries… each Guamanian.

Kandit has asked Speaker Therese Terlaje about both issues. On September 13 we sent her, the Office of the Attorney General of Guam, and the director of land management, a lengthy email with a summary of the issues related to the NDWWTP land, and asked all three offices direct questions. The speaker replied in September, stating she would pull the documents associated with the issues and begin researching so she may respond responsibly. Ms. Terlaje has since fallen ill from coronavirus.

Prior to her illness, we asked her the following questions regarding the Mangilao land issue:

1. From continued public statements it looks like the governor, ancestral lands and GEDA are continuing to circumvent our ancestral land claims laws. Have any of these offices or any officials in these offices met with you or consulted with you about negotiating a license or lease with the Navy?

2. Same question as above but as to the entire legislature itself, has the legislature been advised of details associated with the governor negotiating licenses and leases that affect ancestral claims.

As we await her response, we have decided to ask all members of the Guam Legislature about these two issues. While Ms. Terlaje is the chairwoman of the legislative land committee and the speaker, she essentially represents only one of 15 votes. In order for the legislature to do anything, eight votes are needed.

Here is what we asked every member of the Guam Legislature today: 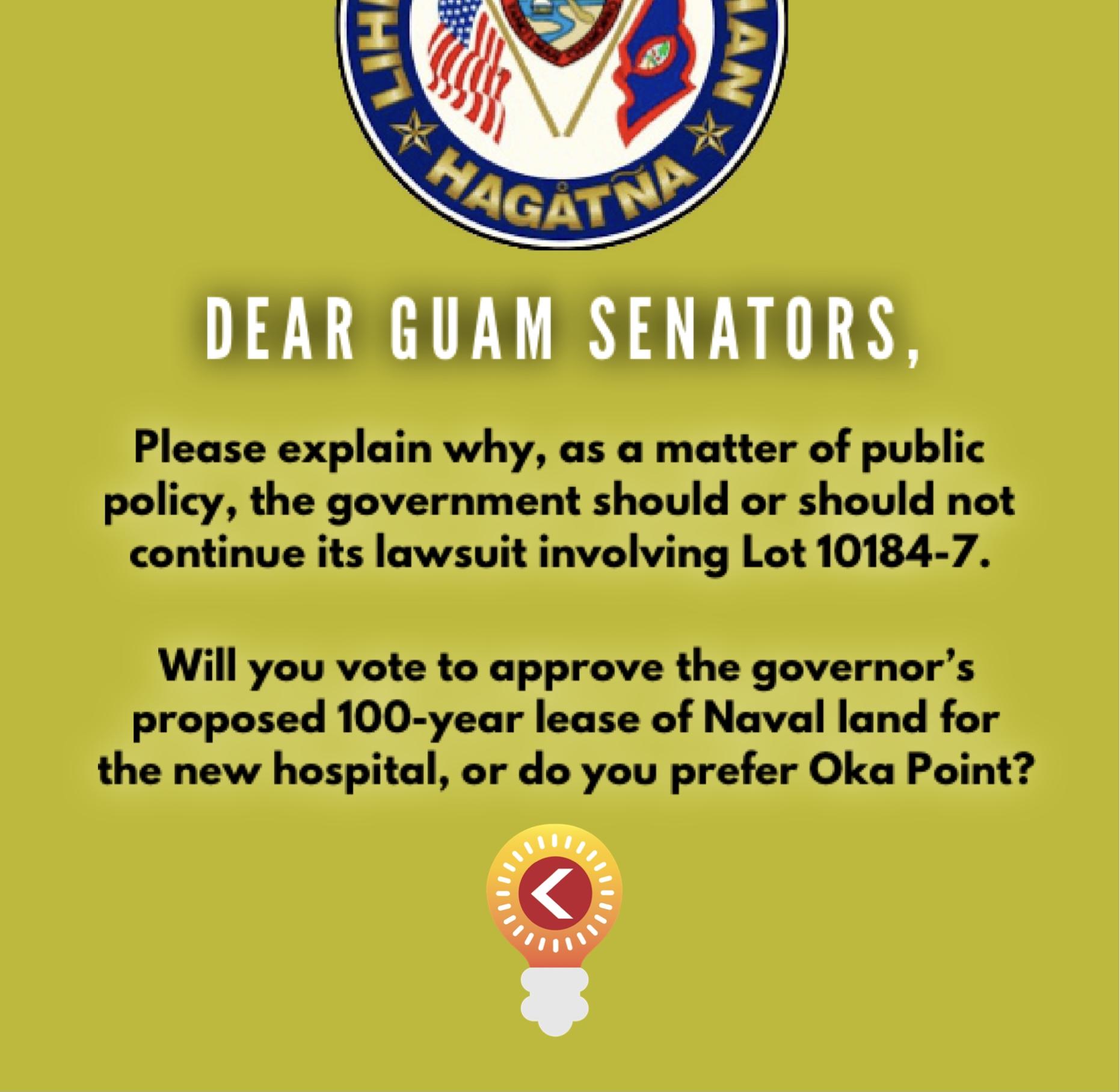