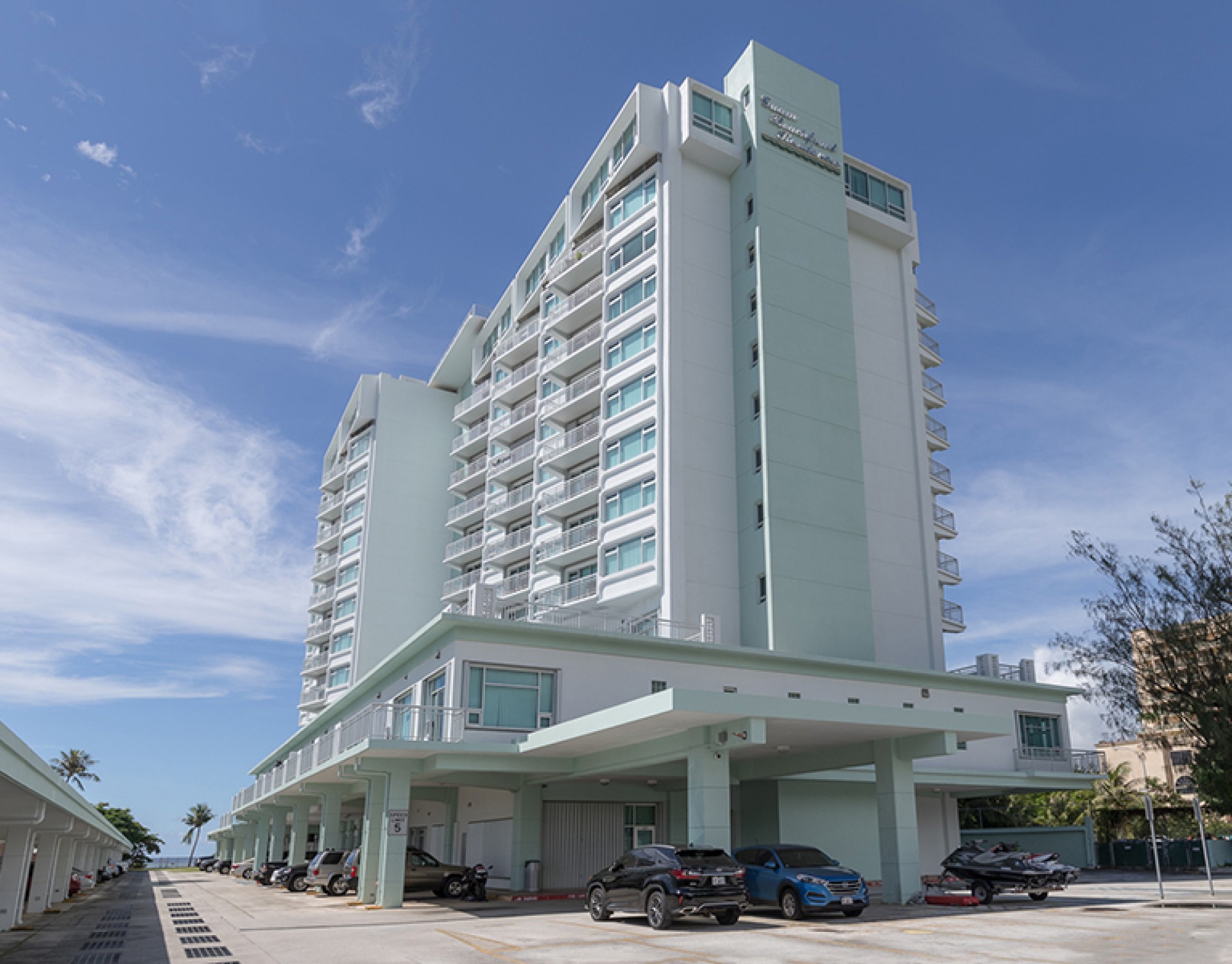 A report filed in Superior Court in the ongoing Tumon land scam involving the former Tropicana hotel has turned an already-sordid scandal into an ever-thickening plot of bizarre twists. This land scam has involved the December 2019 sale of ULG, Inc.’s one-third interest in the land that facility (now Guam Beachfront Residences) sits upon to Columbus Development Corporation, a shell company associated with Philippine billionaire Dr. Lucio Tan.

That means ULG’s one-third interest had an appraised value of about $677,000.

Columbus bought the property – six months after its June 2019 appraisal – for $2.5 million, or nearly four times its appraised value.

Kandit, without naming the parties involved, asked three separate real estate brokers with long careers in the industry whether they ever have come across a private investor paying up to three times the appraised value of a property.

“In my experience, no,” replied Joylyn Munoz-Mateo, principal broker and owner of Absolute Realty Guam.

Pacific Rim Management broker and owner Odessa Martinez said, “In my career I have not. If this buyer possibly had control or ownership of the remaining shares or interest in this property, that would seem to be the only logical reason to pay such a high premium over appraised value to buy just one-third interest in a property. Otherwise it would seem that some questionable motives were involved in this purchase!”

“In my personal real estate career probably not,” said Duane Pahl, associate broker at Today’s Realty. He added something interesting: “But if I owned the adjacent property and somebody else was going to purchase

it, I would pay as much as I could to keep the property that I really wanted. Their situation is like this especially with families.”

While the Tumon land scam involves a commercial property, the buyer actually did have a proximate interest. Columbus, a shell company, is one of several owned and operated by Dr. Tan’s family on Guam. The better known of these companies is Goodwind Development Corporation, which owns and operates the Micronesia Mall. The June 2019 property appraisal Columbus used actually was prepared for Goodwind. Another of the companies is Grandview.

Grandview owns and operates the former Tropicana – Guam Beachfront Residences. Up until Columbus (Grandview’s sister company) purchased the one-third interest of the land, Grandview was paying ULG, Inc. $1,000 a month. The rent amount, which was set via a 90-year lease in 1972, is far below market value and will increase only marginally until 2062.

There were three common denominators among the Tan companies, aside from the association to Dr. Lucio Tan (who neither resides on Guam nor operates these Guam companies himself): Phil Schrage, Alex Lim, and up until October 2021, Joseph Chua. Mr. Chua is Dr. Tan’s son in law. In early October 2021, national news outlets throughout the Philippines were abuzz over Dr. Tan’s confirmation Mr. Chua no longer worked for any of his companies, including the Guam corporations, where he had been in charge since the 1980s. The billionaire’s confirmation came in the form of a full page ad in one of the Philippines’s top newspapers.

“The public is hereby notified that Mr. Joseph Chua has no authority to represent Dr. Lucio C. Tan, the Tan Family and Lucio Tan Group of Companies. Any prior authority of representation given to Mr. Joseph Chua are deemed void and or revoked,” the newspaper advertisement published October 6, 2021 read. As a matter of fact, Chua had already been replaced from his position as president of Goodwind in May 2021 by Dr. Tan’s daughter, Jeselyn “Gigi” Tan Yu.

The ad was run within days of depositions taken and filed in the Superior Court of Guam in a lawsuit, where Columbus, Schrage, and Lim are among the named defendants, that seeks the return of the property to ULG, Inc., and the money Columbus supposedly paid for it.

The plaintiffs in the latest lawsuit – Peter Leon Guerrero, Rita L.G. Toves, and the estate of Bernadette L.G. Vandergrift – have raised the issue of both the appraisal and the purported proceeds of the sale of the land they claim is theirs and was illegally sold by their sister-in-law, Mary Leon Guerrero, and her broker, Ramona Siblang.

Raised in their lawsuit are the Columbus payment of $2.5 million, the wire transfer of $2.3 million into Mary’s personal account, her transfer of half the proceeds to her son, Collin, the commission paid to Ramona and her then-brokerage firm, two suspicious life insurance policies Ramona sold to Mary and Collin (they paid $300,000 each; Collin was only 27 and childless at the time), and a stock investment at a private startup company.

The complaint alleges the transfers were fraudulent, and cites 20 GCA §6101: “[e]very transfer of property or charge thereon made, [and] every obligation incurred, with intent to delay or defraud any creditor or other person of his demands, is void against all creditors of the debtor, and their successors in interest.”

“Mary, Collin, and Ramona,” the lawsuit states, “voluntarily and willfully conspired and carried out a series of transactions,” to delay or defraud ULG and the plaintiffs.

The lawsuit is the second involving the Tropicana land. The first was filed in October 2020, and includes demands against Columbus, Schrage, and Lim, among others. In that lawsuit, the Tan company and executives and others are accused by the same plaintiffs of, among other things, conspiring with Mary and other defendants to illegally acquire the Tropicana land.

According to the sworn testimonies and documents arising from the 2020 lawsuit, Mary Leon Guerrero, Phil Schrage, and a host of intermediaries had been is discussions for years prior to the sale about the possibility of acquiring the ULG property interest. Documents in the case show a realty brokerage firm, The Property Shop, was used to facilitate the acquisition. Ramona Siblang was a real estate agent in The Property Shop.

According to testimony and to several exhibits, including emails and text messages, Ms. Siblang was at the center of negotiations, not just in the sale of ULG’s one-third ownership interest of the Tropicana land, but also the remaining two-thirds interests held by two other Leon Guerrero families.

Ms. Siblang, in an exclusive interview with Kandit denied conspiring with Schrage, Lim, or Chua to conduct any illegal activity.

Asked about the sale of the two life insurance policies, which cost Mary and Collin Leon Guerrero $600,000 together, Ms. Siblang said the policies were legitimate, and that Mary paid for her policy via a cashiers check drawn from a Bank of Hawaii account.

According to Mary Leon Guerrero’s depositions, which were taken in August 2021, she had two bank accounts at Coast 360 at the time of the sale of the property. No Bank of Hawaii account was mentioned, or appear in any of the documents filed in the case. In fact, the $2.3 million proceeds from the sale of the ULG, Inc. property interest was wired into one of Mary’s Coast 360 accounts.

“Mary supposedly used $300,000 of the proceeds from the sale of U.L.G.’s interest in the Properties to buy life insurance coverage, Policy No. 150187853, from Midland National Life Insurance Company,” the December 2021 lawsuit states.

That policy, Exhibit 21 in the lawsuit, was the subject of an email the plaintiff’s attorney, David Lujan, sent to Midland’s Guam general agent, Farley Young. In the email, Mr. Lujan enclosed the purported Midland insurance policy, pointed to certain sections of the 31-page document, asked Mr. Young for the names and addresses of the secretary and president, and inquired, “Since no date appears, could you inform me when the signatures were made?”

Mr. Young responded to the attorney, “Reading your letter I think I’ll forward this to my Regional Director Micah Frankel in CA to assist you. For sure he will respond it asap.” That was November 16, 2021.

Three days before Christmas, Mr. Lujan called then emailed Mr. Frankel to confirm the existence and status of the policies. In the email he provided Mr. Frankel with information indicating the original lawsuit, and he also left a post script: “For your information, a lawsuit is to be filed in Guam not later than December 30, 2021 against your Agent, Ramona Siblang, and the 2 insured persons.”

No confirmation exists, as of yet, on the validity of the policies, or whether they still are in effect.