At 2:04 p.m. on October 8, 2019 in Seattle, Bernadette Leon Guerrero Vandergrift answered a phone call that would last 78 minutes, according to the AT&T bill, also known as Exhibit 46 in Superior Court of Guam Civil Case 0776-2020. The phone call was from Guam, and on the line were her sister-in-law, Mary Leon Guerrero and, Mary’s broker, Ramona Cepeda Siblang. Also on the call were Bernadette’s brother, Peter Leon Guerrero, and their sister, Rita L.G. Toves; all of whom live stateside. The three siblings and Mary own equal shares (25 percent each) of ULG, Inc., the family corporation that owned a one-third interest in the land, where Guam Beachfront Residences sits.

By the time of this phone call, documents at the Guam Department of Revenue and Taxation, including ULG’s amended by laws and annual reports, clearly show Mary had no authority on her own to make decisions for the company. The company’s charter even states ULG shall have no less than three board members.

This is precisely why Mary called her late husband’s siblings, according to court records: she wanted to sell ULG’s interests in the Tumon properties, and she needed at least two of her in-laws to vote with her.

But that didn’t happen. After 78 minutes, the decision was made: ULG would not sell its interests to Columbus Development Corporation.

Despite the decision not to sell, a series of emails and phone messages crossing wires among Siblang, Mary, Pacific American Title and Insurance Company (PATICO), and Columbus move conversations from an offer on the interests to a purchase agreement to a preliminary title report, and on to an actual sale right before Christmas 2019.

A document dated November 4, 2019, less than a month after that 78-minute phone call, Mary and Siblang were on the move. Mary and her son, Collin, signed a purchase agreement for Columbus to purchase ULG’s interest in the Tumon property for $2.5 million.

Mary’s in-laws, despite the fact they owned the majority of the company, got nothing from the sale. Mary and Collin, took most of that money, with a commission of about $135,000 going to Siblang. When the Leon Guerrero siblings found out what Mary did to their family’s land interests, they sued everyone they thought was involved. Siblang was not named in the lawsuit, but PATICO’s escrow agent, Lou San Nicolas was.

It wasn’t until the plaintiffs discovered an eight-page transcript of San Nicolas’s WhatsApp messages with Siblang between November 10, 2019 and January 28, 2020, that they began to understand the breadth of the alleged conspiracy against them, and who may have been involved in it all. Kandit released the first two-and-a-half pages of the transcript of messages Sunday. Those messages start from the time Mary and Siblang inspected ULG’s corporate documents at Guam DRT on November 11, 2019 through the day after Thanksgiving, November 29, 2019, when Mary allegedly altered the corporate documents fraudulently.

The next four pages of the transcript reveal why the plaintiffs are alleging PATICO should have known Mary didn’t have any right to sell the property interest. A bunch of very powerful names also are dropped in the conversation.

It was Friday, November 29, 2019, when Mary filed the altered documents at DRT and her agent, Siblang, messaged San Nicolas frantically to ensure PATICO was aware of the new filings. The two stop messaging each other at 2:41 p.m. that day, and don’t message each other at all until business reopens the following Monday, December 2, 2019.

“Good morning sis!” Siblang messages San Nicolas at 10:21 a.m. “Does the commitment get sent to Buyer too?”

Mr. Schrage is the longtime general manager of the Micronesia Mall, and an underling for years of Joseph Chua. Mr. Chua recently was globally ostracized by his father in law, billionaire Dr. Lucio Tan. The falling out between the two allegedly occurred after the billionaire’s accounting team discovered improprieties inv0lving Chua’s use of company resources to conduct acquisitions, though no details have been provided.

The Property Shop is a brokerage owned by local broker Phil Law, whose name appears in the documents; but, by all indication in the court records, it was Siblang, who truly was involved in the details of this scheme.

“No,” Siblang responded to San Nicolas. “Property Shop is listing and selling agent which is me. Phil Schrage is Buyer’s side but he also facilitates all of Lucio Tan’s Real Estate which is why he signed the Purchase Agreement too. Thanks sis. Both the Seller and Buyer are very meticulous. The Buyer I’m sure you know is Lucio Tan owner of Columbus Development/Grandview/Micronesia Mall etc.”

It was two days later, on December 4, 2019 that Siblang gives the first indication of a problem in a message to San Nicolas. She wrote to her PATICO friend regarding Mary, “Sis I spoke to Seller just now. She is a strong business woman but broke down and cried. This is confidential but sharing with u. She said the family has been harassing her and just wants to move on and finish all of this that’s why she wants to close.”

The next morning at 10:41 a.m. on December 5, and despite Phil Law being the agent for Columbus, Siblang wrote, “I have new important info from Buyer. May I call you?”

Right before the close of business that day, at 4:56 p.m., San Nicolas messaged Siblang, “Sis please call me.”

About an hour later, at 5:41 p.m., San Nicolas simply messaged two symbols, the ‘worried face’ emoji, and the prayer emoji.

The messages continue the following morning at 11:08 a.m., when Siblang writes, “Sis please confirm receipt of the documents. The Article of Inc and By laws and Decree.”

The articles, if they were the true articles of incorporation, would have shown PATICO that the ULG board had to have consisted of no less than three members. According to Mary and Siblang’s representations, only Mary and Collin were members of the board. If Siblang had provided PATICO the correct bylaws, then PATICO would have known Collin wasn’t even a board member, and Mary owned only a 25 percent interest in the company.

Despite these facts, Siblang and San Nicolas’s messages show a rush to sell; and from December 6, 2019 to the date of closing seven days later, the two friends orchestrate the multimillion dollar sale. At 11:53 a.m. on Friday the 13th of December, 2019, San Nicolas messages the good news: “Docs at DLM for recording.”

By the end of that day, PATICO made its money from the fees, Siblang made her commission, and Mary and Collin became millionaires in waiting. Mary’s in-laws – Peter, Bernadette, and Rita, whose father was the original landowner, got nothing.

And this isn’t even where the juicy stuff starts. Stay tuned to Kandit for our continuing look into this massive Tumon land scam, the powerful players involved, and the conspiracies that abounded. We’ve only just begun with this one.

The portion of the 8-page message transcript relevant to this story follows: 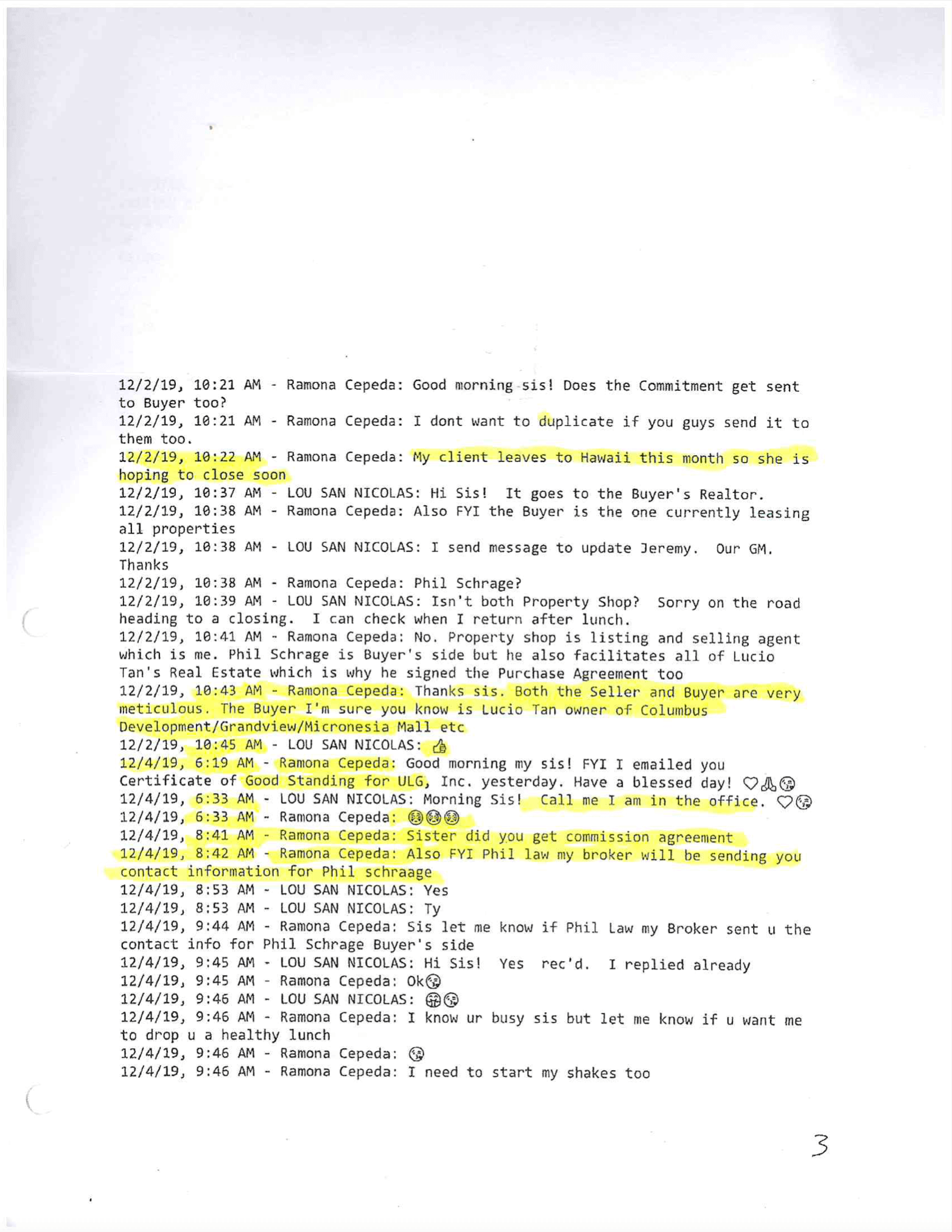 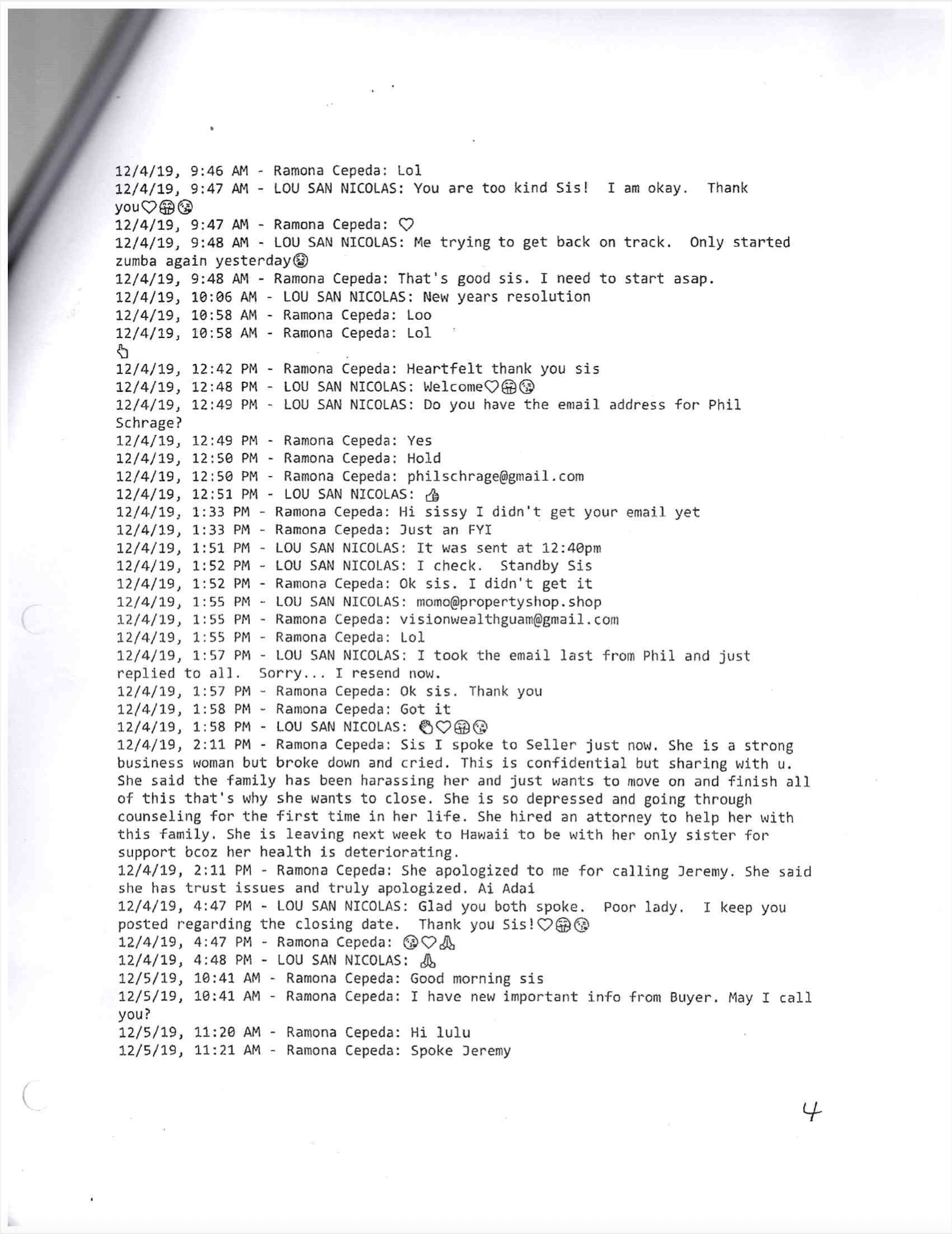 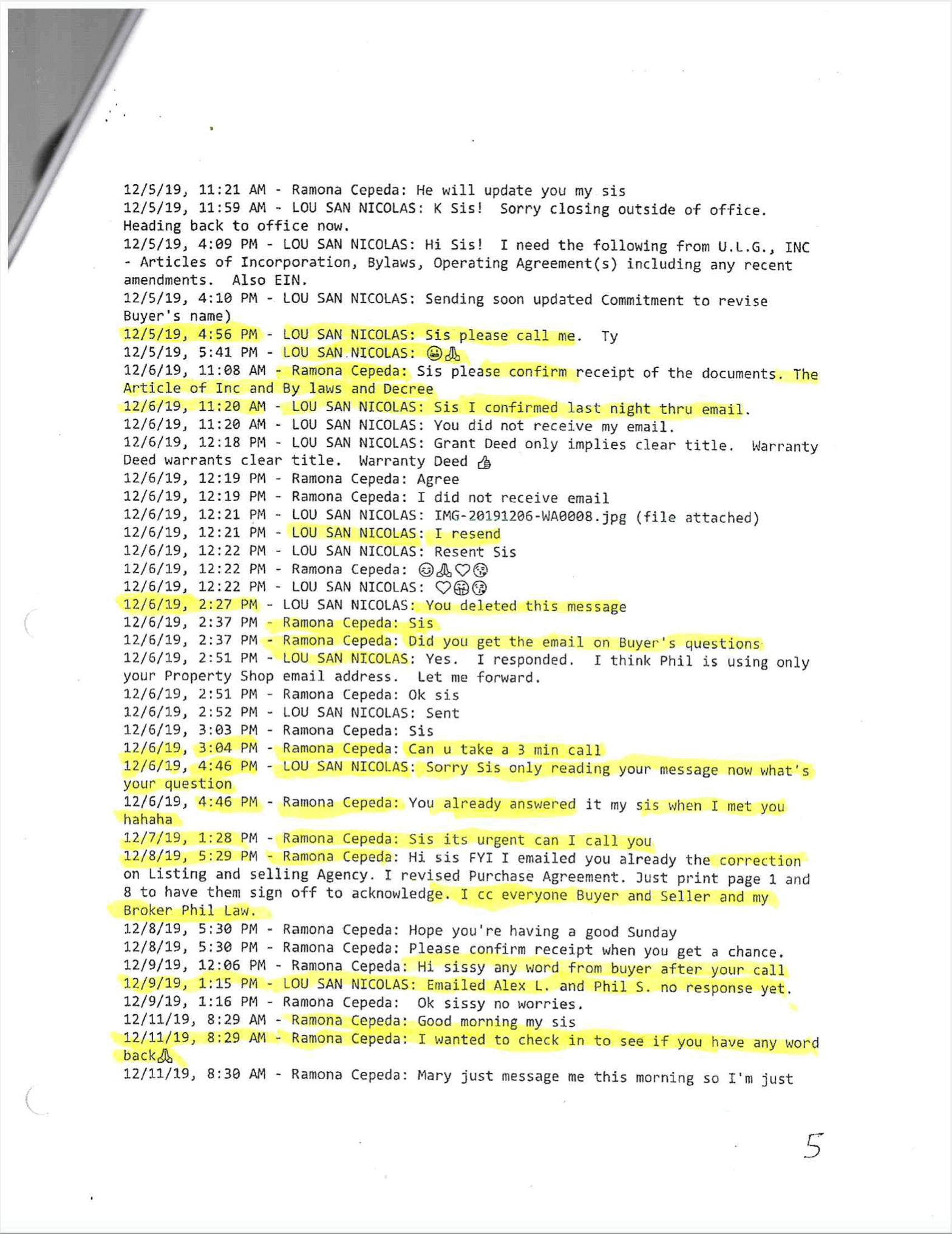 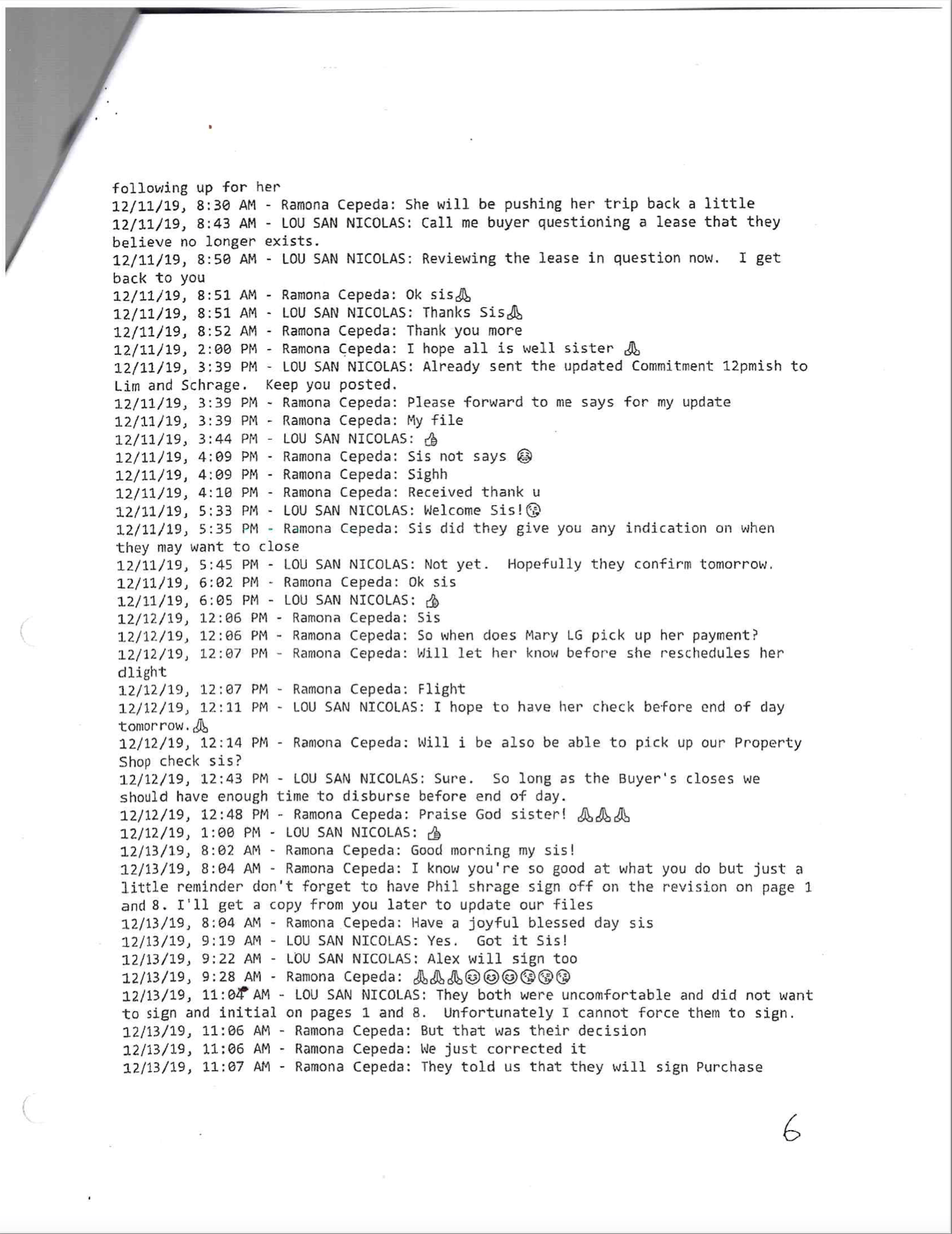 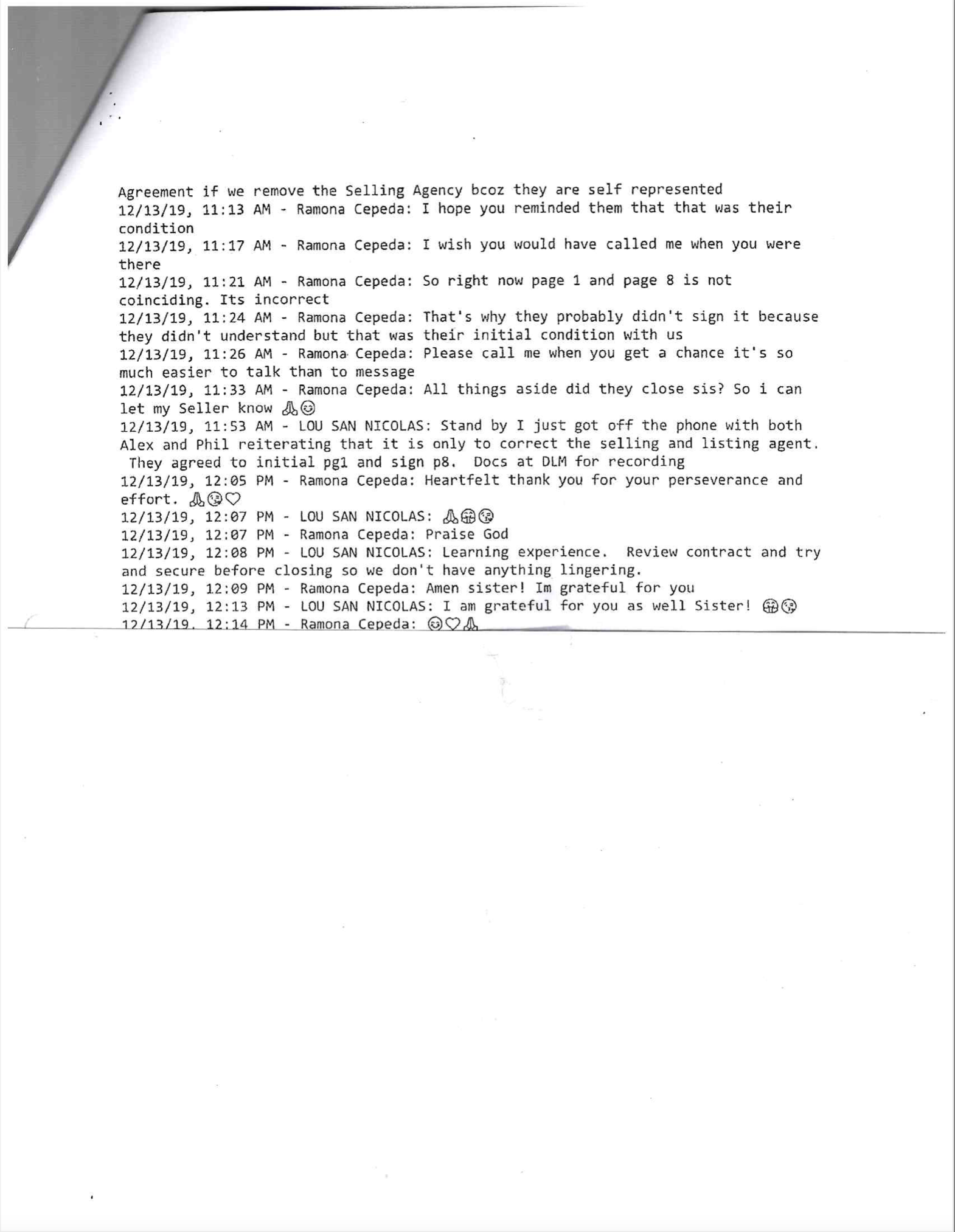