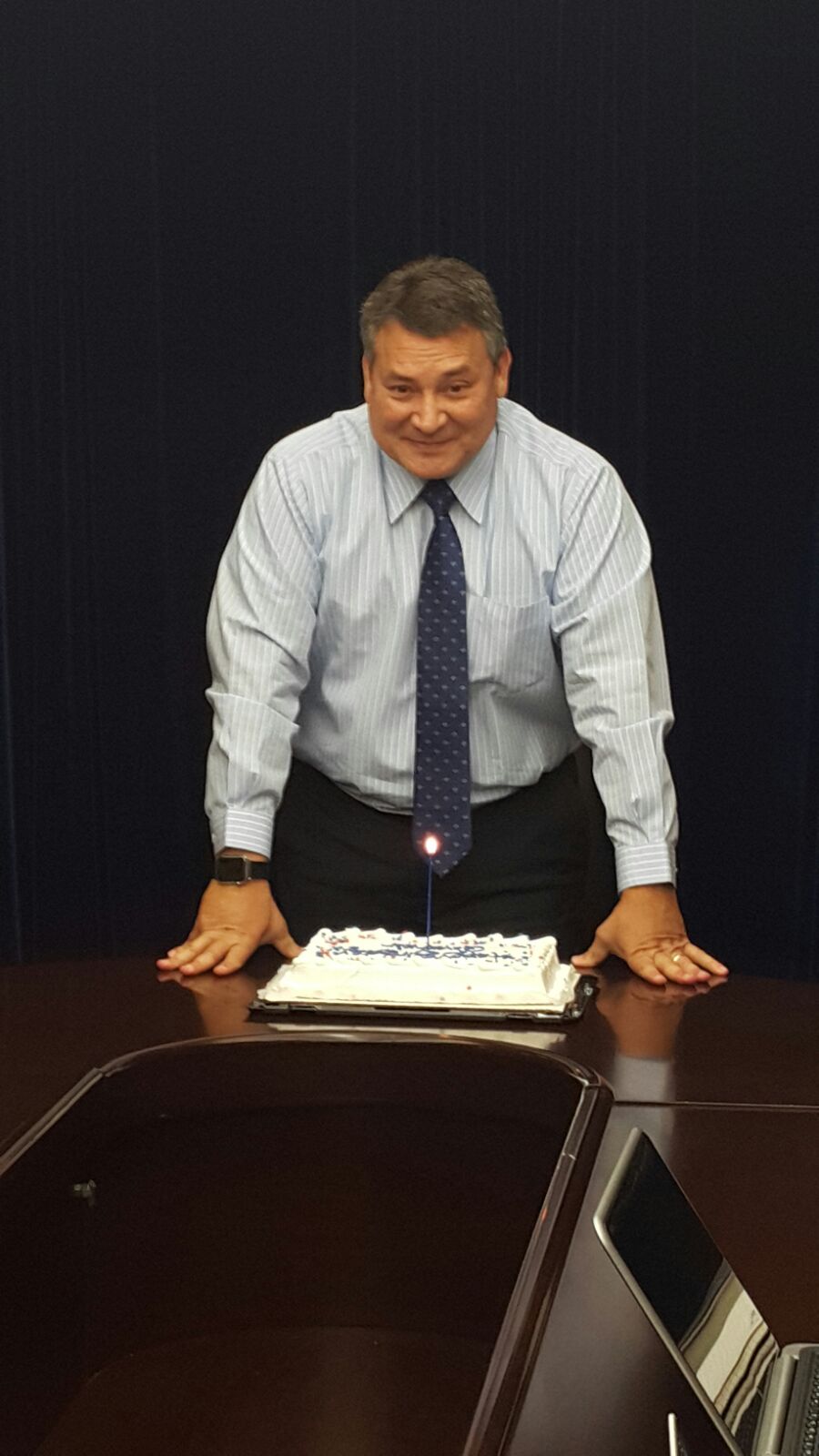 Transcripts of a February 8, 2017 meeting of the Guam Ancestral Lands Commission indicate the Office of the Attorney General of Guam and the GALC and Department of Land Management itself knew the government had indeed given away the property, where the Northern District Wastewater Treatment Plant sits. Present and participating in the meeting, aside from the commissioners, was an assistant attorney general and Gov. Eddie Calvo’s legal counsel, Sandra Miller. The greater part of the transcripted meeting shows a discussion about a Calvo-orchestrated attempt to take back the property and to seize frozen proceeds held in trust from former First Lady Geri Gutierrez, her sisters, and their families.

By the time of the meeting, the government of Guam had cast a shadow through several lawsuits on about one million square meters of land across Route 1 from the Micronesia Mall commonly known as the Harmon Annex, in Ukudu, Dededo. In 2006, the GALC under the Camacho administration had deeded the land to the estate of Jose Martinez Torres. Ms. Gutierrez and her sisters were the administratrixes of the land in question, and had sold the properties over the next two years to developer Younex Enterprises Corporation, owned by Yoon Kil-koo. Mr. Yoon began building housing for foreign workers ahead of the impending military buildup. The land subsequently was purchased by developer CoreTech International, Inc.

“The one that generated the $21 million already has a third owner,” then-GALC chairman Anthony “Sonny” Ada is quoted in the February 8, 2017 meeting transcripts as saying. “Remember when Attorney Ecube came to Ancestral Lands and said that Mr. Yoon was a bonafide third party purchaser, innocent, he didn’t know what was going on? Attorney Bischoff at the time said he bought the property in good faith. He didn’t know what was going on.”

‘Bischoff’ is former assistant attorney general Bill Bischoff, who was handling the land issue at the time. The reason this is significant is because 22 months after this meeting happened, where the OAG’s knowledge of the legitimate purchase was acknowledged, then-director of Land Management Michael Borja – who was present and participating in this meeting – sued CoreTech for the title to the property. And the OAG to this day is counsel of record for the government.

“The Commission can fight for those lots, but I don’t know if you still have it,” Ms. Miller, the governor’s legal counsel at the time, advised the commissioners in the meeting, according to the transcripts.

“The next question to our legal counsel, with all these cases what was in the ancestral land meeting, what was the direction to the Torres family and if that instruction that was in the minutes and the document that was signed, which prevailed?,” commissioner Antonio Sablan states on the record a few minutes later. “To me the one signed and recorded at land management prevails. Am I correct?”

Those documents are at the heart of CoreTech’s counterclaim to the Ukudu Lot 10108-6, or the NDWWTP property. According to the legal documents filed at DLM, the certificate of title was issued to Younex, and the deed of sale is in the name of CoreTech, meaning CoreTech is the legitimate owner of the property.

In response to Mr. Sablan’s question, a conversation ensues. Here is the transcript of that conversation:

Attorney Kristan Finney: All of that is what they are trying to figure out in the court. Commissioner Antonio Sablan: For our purposes what should we be approaching it?

Attorney Kristan Finney: There is nothing that you can do right now it is in court. The land was given to the Estate and now we are waiting to see if that was the correct action.

Commissioner Antonio Sablan: Once we give it away it is out of our hands.

Attorney Kristan Finney: That is what is at issue with the litigation.

Chairman Anthony Ada: It is what is the intention.

Attorney Kristan Finney: That is what the court is trying to determine all those cases are stayed while the Supreme Court decides in the one case the entire office of the Attorney General was removed, they have to decide if that was the right thing or not. While they are making decision on that case everything else is stopped. A different judge says that the AG is disqualified but not the others that work there and can continue to represent the government in other cases so everything is on hold until the Supreme Court decides on that issue.

The remainder of the meeting, according to the transcript, was a tense argument, where two of the commissioners – Mr. Sablan and Louisa Wessling – protest closed-door meetings that circumvented the Open Government Law with Gov. Calvo, possible settlements discussed in private, and the former governor’s direction to the GALC and his cabinet and legal staff on what to do about the litigation.

Here is the transcript:

Commissioner Antonio Sablan: The third question is to the management, Mr. Borja and Mr. Camacho. I heard that several of the board members have been brought in for a meeting.

Commissioner Antonio Sablan: Why are we not being invited? I really feel that there is something underhanded that is my feeling and maybe I shouldn’t be saying this but that is my feeling. Maybe not bringing them in all at the same time but I feel that Louisa and myself should be a part of this. Is there a decision being made or an orientation? And then I hear there is an offer of settlement.

Director Michael Borja: You are not hearing about a settlement you have already been told there is an offer to settle you were told by the Governor.

Commissioner Antonio Sablan: By who?

Director Michael Borja: The Govemor. Didn’t you have a discussion with the Governor at some point about this awhile back?

Commissioner Antonio Sablan: to consider if there is an offer, to consider the expense and the litigation but there was never a discussion of what the offer is.

Commissioner Antonio Sablan: Again, several of the board members were brought in, is there a reason why Louisa and myself were not brought in?

Director Michael Borja: You were brought in groups to make sure we do not meet a number greater than or equal to a quorum?

Commissioner Antonio Sablan: I understand that but my question is why Louisa and I were never invited in another meeting or later on in a separate group.

Chairman Anthony Ada: When Attorney Miller was here did she cover everything that she covered with you guys?

Director Michael Borja: She did, she discussed it all.

Chairman Anthony Ada: We want to make sure everything comes out in the open that is why I want this comprehensive, bring all the documents and bring everybody up to speed and it is going to be on the 22nd

Commissioner Maria Cruz: She is repeating again what the governor had brought up. Chairman Anthony Ada: It doesn’t feel good when you are not invited.

Director Michael Borja: As we saw, the train is moving so fast now that everything we talked about this morning is all changing because of the Supreme Court case that just got released yesterday afternoon.

Chairman Anthony Ada: That is my error and next time I will ask if everybody is aware but I don’t expect this to happen again.

Deputy Director David Camacho: That is my fault because the last two that came in was this morning and then we had the meeting and Sandra was going to show up, it is still the same presentation there was no voting or what.

Chairman Anthony Ada: Yesterday I was called to meet them, but I agree with you and next time I will talk to everybody and make sure you have been called in.

Commissioner Antonio Sablan: The thing is I am hearing this a second time around, when is my turn? I am sure Louisa didn’t get invited.

Commissioner Louisa Wessling: I saw that everyone was going to a meeting, saying did you get the call? Did you get the email? Of course I went to check my email and checked my voice messages, there was nothing. I figured that maybe it had to do with some of these old cases and only the people who were involved in them

Call the WhatsApp group ‘The Crew’

Director Michael Borja: I also need to caution you guys, if you are in a social group in whatsapp that can constitute a meeting. You really need to seriously need to consider it for social events and discussing parties but not for items to be discussed.

Attorney Kristan Finney: You guys can’t meet anyplace that is not a properly noticed meeting. I am not sure what you guys are referring to here

Director Michael Borja: Seriously. In fact, that is why we have to do the notification to the media and mayors and legislature by email as well. The Ancestral Lands Commission, unlike the CLTC, has a stricter notice requirement of meetings.

Commissioner Maria Cruz: I can let you read it, it has nothing to do with work. Commissioner Ronald Eclavea: I don’t think they doubt it.
Chairman Anthony Ada: Just re-title it call it the crew or something.

Commissioner Antonio Sablan: One last thing, I heard that this might be a discussion of an old issue, I object to that. The old issue was a 21 million dollar mistake, I am a part of this board and I would like to make future corrections to that 21 million dollar mistake. I understand it is in the hands of the court and anything that to be made we are all in the same boat right now so we need to be a part of it.

Chairman Anthony Ada: (incoherent sentence) there knowledge and understanding issues for ancestral lands, I am sorry if you feel like we don’t like you

Commissioner Maria Cruz: I think they were pressed with time and to educate both of you would have been lengthy and if they don’t have the luxury of time on their hands. Rest assured decisions have not been made and everything that we discussed was re-discussed again, I am going to defend the Director and the Deputy.

Commissioner Antonio Sablan: Commissioner Cruz, Louisa and I are deep into real estate, and for you to say it takes us time to educate us