Home >> WATCH: Tina Sablan speaks to the people of the Commonwealth about her nomination; Kilili endorses her

WATCH: Tina Sablan speaks to the people of the Commonwealth about her nomination; Kilili endorses her

The following is news from the Democratic Party of the Commonwealth of the Northern Mariana Islands:

Central Executive Committee members gathered on Tuesday night to receive the Gubernatorial Search Committee’s recommendation for their party’s candidate in the 2022 General Elections. The eighteen member committee met to discuss, and nominate both their Delegate and Governor for 2022 to where a unanimous vote was reached with excitement and hope.

Vice Chairman Daniel Quitugua shared the search committee’s vetting process that consisted of 5 potential candidates that were all very credible but only one could be selected. “The Gubernatorial Search Committee was formed a little over a month and a half ago in preparation for the 2022 elections. The search committee was formed at the request of the party’s elected officials to seek out potential candidates in the event that Congressman Kilili Sablan decided not to run for Governor. It was definitely a tough decision to make but when the search committee concluded its candidate interviews – Tina Sablan was at the top of everyone’s list.”

Congressman Kilili Sablan announced last month his plans to run again as delegate, and last week submitted his letter of intent to run under the Democratic Party. The party also voted unanimously in favor of him as their candidate.

“Tina Sablan has my complete support and I look forward to campaigning with her on the Democratic Party ticket over the next 12 months.

“The people of the Marianas are sick and tired of old school politicians, who put their family and friends before the best interests of our islands.

“Tina Sablan will be a Governor the people of the Northern Mariana Islands can trust completely and be very, very proud to call their own. She will bring a new kind of leadership to the office of Governor, based on honesty and fairness to all. Her focus will be what is best for the next generation, not the next election.

“As your representative in the U.S. Congress, I look forward to working in full partnership with Governor Tina Sablan. Together we will build back better in the Marianas,” said Sablan.

The deadline for the submission of nominations and letters of intent for Governor, Lieutenant Governor and Delegate for US Congress were on Thursday, Nov 1st. Democratic Party of the NMI Chairwoman Nola Kileleman Hix stated that 5 letters of intent for Governor were received and it was agreed that since only one candidate would be selected the names of these candidates would remain confidential. “On behalf of the party, I want to express my sincerest thank you to everyone that submitted their letters of intent as we plan to keep these candidates close. This is just the beginning and we thank you for your support, bravery, and determination to join the people’s party for good governance.”

“We are hopeful and very excited that Tina accepted the Gubernatorial Search Committee’s recommendation and nomination for her as the party’s candidate. With this acceptance she also requested a little more time to find her a running mate. She has requested that the party assist her with this search so we will continue our outreach for Lieutenant Governor from now for two weeks,” said Hix. 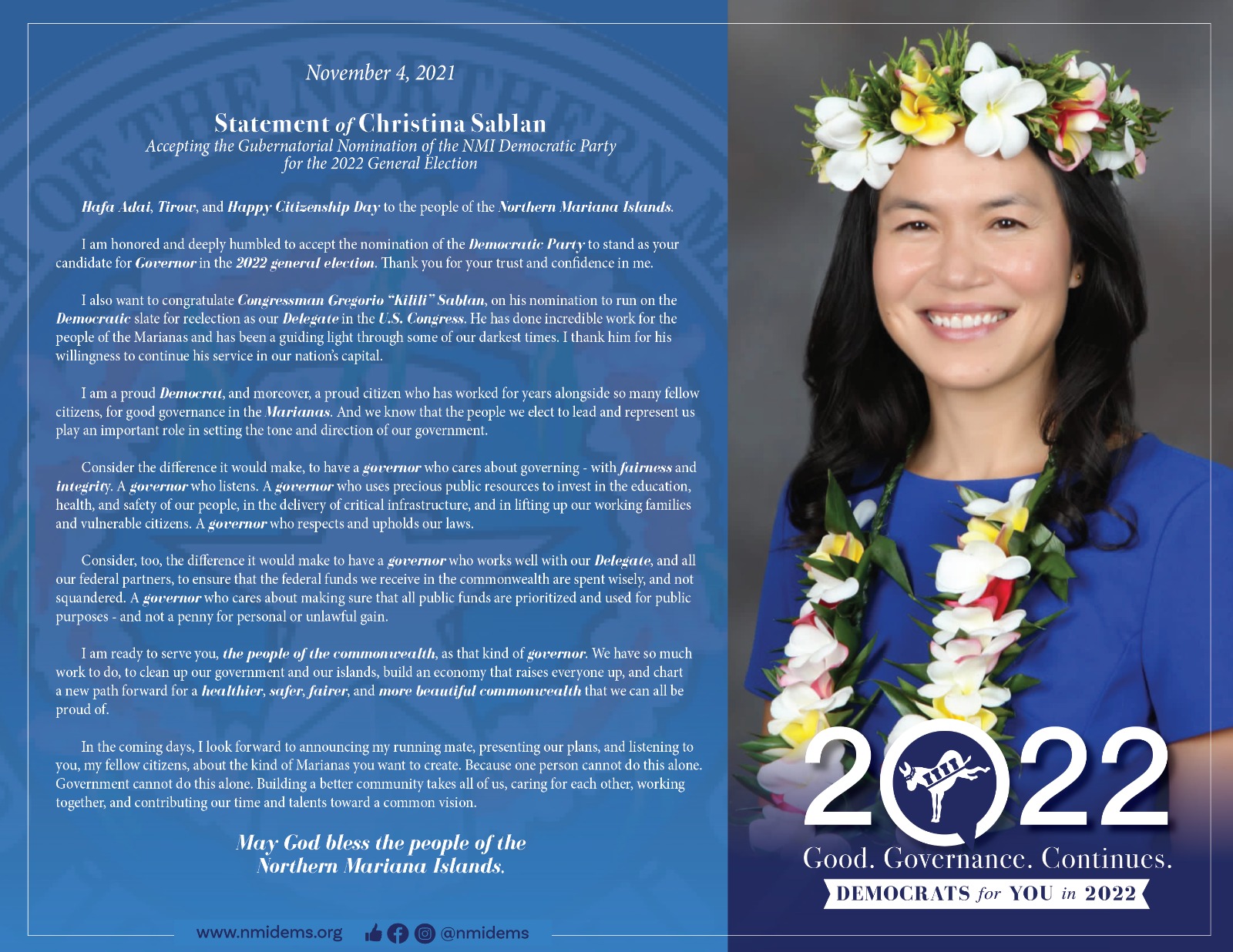