Home >> My truth: The Neo, drugs, and Kandit’s start

My truth: The Neo, drugs, and Kandit’s start 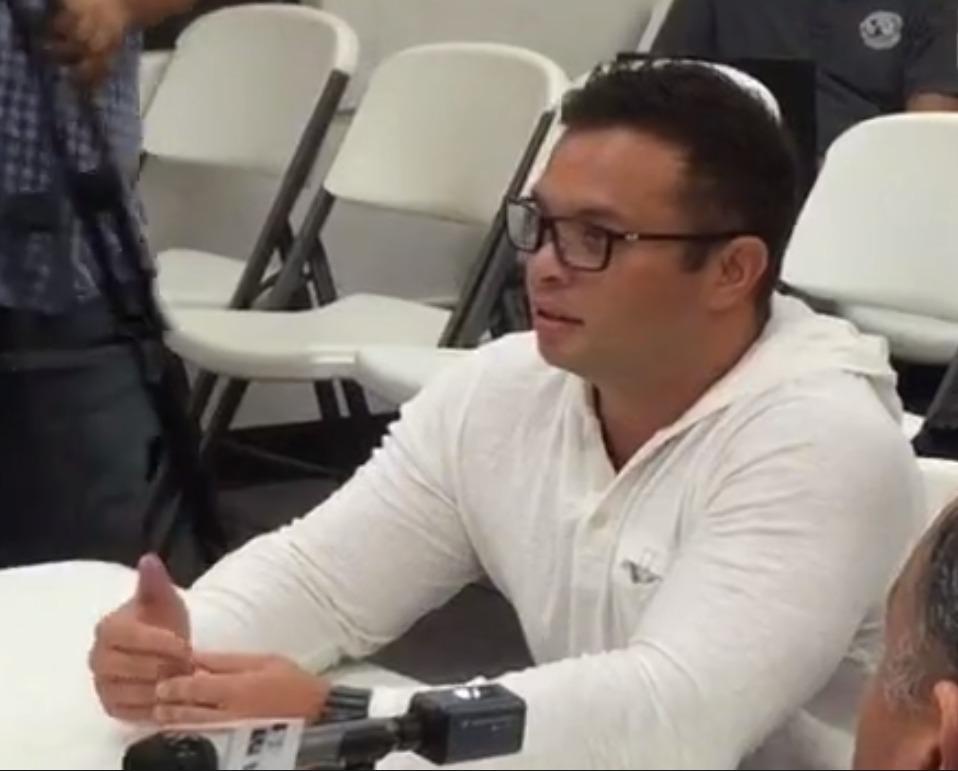 Ray Tenorio’s police raid on my home on April 27, 2018 was not the first time the Calvo Tenorio administration attacked me. It was the third. The first attack is unrelated to this story. The second, launched a week after I left the governors office, was actually orchestrated along with the Neocatechumenal Way.

The few of you, who followed my story before we created Kandit might recognize this. I told this story at the start of my crazy public journey that began with that police raid, then turned into a full-blown revenge-laden exposure of corruption in the government of Guam, which at some point yielded to the more mechanical and — dare-I-say — professional organization you see today. But I never wrote this story down, until today. And unlike then, today I won’t sound or seem so crazy telling it.

I had been a loyal and trusted advisor to Eddie Calvo since 2009, when he recruited me to join his first campaign for governor. His two terms would end in January 2019. I did not want to be a classified government employee, and I did not want to support Ray Tenorio for governor, or have anything to do with his campaign. I wanted out. So, in early 2017, I devised a plan.

I would open a news company called Candit. It was a double entendre, but its true meaning was ‘Light.’ I was inspired by Augustine’s On Free Choice of the Will, where he correlates Jesus Christ with truth, wisdom, number, light, and love.

At the time, I was dating a guy, who worked at a bank, where we had a joint account. His aunt was a candidate for governor at the time. I had no intention of being involved in any campaign. I just wanted to leave the governor’s office and open my news company before Eddie Calvo left office.

Events hastened that plan, when in late July 2017 I was first attacked by the very administration I loved and was so very loyal to. I took a leave of absence to figure things out, then returned in mid-August to let then-chief of staff Mark Calvo know that I’d be resigning. I thought everything was just fine. I was going to start my news company. Yay. I waited for my annual leave cash out, and I applied for the money that was investing in my portfolio at the Retirement Fund. That was to be my seed money to start my company.

Two weeks later, on September 1, 2017, I got a call in the morning from Sabrina Salas Matanane, who wanted to know if I was okay. I thought that was odd. I said, ‘Yes, why?’ She told me the news room at KUAM was flooded with phone calls from people asking whether KUAM was going to cover the criminal complaint filed against me for criminal sexual conduct. I told her it must be some prank. I had never sexually assaulted anyone. As a matter of fact, I told her, I was a victim of rape when I was 13 years old.

Pause for a moment and consider the time this all happened. This was September 1, 2017. A few months prior to that date, my now-former boss Gov. Eddie Calvo signed into law the Frank Blas statute that made it possible for victims of sex crimes to sue entities, like the Archdiocese of Agana, that failed victims and covered up these sex crimes. I penned the governor’s four-page letter to the speaker explaining that he signed the measure into law despite the heavy lobbying from priests to veto it. By the time Sabrina called me that September morning, Anthony Apuron had been suspended from his office by the Vatican for more than a year, and victims of sex abuse by priests and teachers within the archdiocese had begun to sue him.

Within minutes of Sabrina’s call, Gaynor Dumat-ol Daleno from the Pacific Daily News called to check on me as well. Ten or 11 phone calls came into the newsroom that morning, she said. Callers were asking if they’re going to cover this story that Eddie Calvo’s former senior advisor and communications director was forced out of the governor’s office because of the criminal complaint that I committed a sex crime against someone.

There were no other details. I was completely in the dark, but I was able to tell both KUAM and the PDN that none of this is true, because I had never committed a sex crime against anyone.

So, I asked my former lieutenant at the governor’s office, Oyaol Ngirairikl, if she could find out what this was all about. She called me back and told me someone filed a police report at the Agat precinct that in 1996 I, and two others, had sex with a 16-year-old. I was 15 and 16 in 1996.

Oya told me the police didn’t know what to do with the complaint, because the allegations happened 21 years prior.

Another source told me who the complainant was. I won’t divulge his name, mainly because he’s a basketcase and a closet case.  The source also told me the name of one of the other two people the closet case accused of sexually assaulting him: Jeryl Lujan, the youngest son of attorney David Lujan. Jeryl and I are the same age. We have been friends since high school.

I wondered, ‘Why the hell would this ugly closet case accuse Jeryl and me of this, and actually file a criminal complaint at the Agat precinct?’ And who the hell are all these people calling into the news rooms? My mind was swirling. It was difficult to fathom that I was being attacked like this, in what appeared to be a very strategic and coordinated attack. And why were these conspirators attacking Jeryl, too?

What the hell was going on?

I asked that question several times between the moment Sabrina called, and the next couple of hours, as I was trying to figure it all out. I was grateful to Oya, who assured me GPD would make no comment about the case because there was no case. And without a GPD comment, there was no story. No story, no worries. The last thing I needed as I was newly unemployed and waiting for my money to hit my joint bank account to start my new company, was the stain of false allegations that I was some sort of pedophile.

I called my then-boyfriend at work to tell him what was happening and the solution I proposed. I was not tone deaf to the political realities of his aunt’s campaign for governor. So, I was going to suggest to him that we tell people we were no longer dating, at least I could clear my name in case rumors got out of hand. But before I could make that suggestion, he made it himself.

It is one thing for me — the person going through such anxiety — to make the offer. It is quite another matter altogether for him to so callously ditch me. My heart fell, and I decided right then and there he wasn’t the person I wanted to spend the rest of my life with.

As fate would have it, moments after that heartbreaking call, my friend who I was going to start Candit with — Carlos Pangelinan — called me with news about his research on the name of my accuser. He worked his magic and found an obituary of my accuser’s father. His grand uncle was then-Archbishop Anthony Sablan Apuron.

It made sense. I wasn’t the target at all. I was just collateral damage, and a way to get the story out faster. Now I knew why this idiot accused Jeryl, too. It had everything to do with his father, David Lujan. A few phone calls later from various sources confirmed what I never would have considered: The Neocatechumenal Way had manufactured and orchestrated the entire thing.

It was a rude awakening, or a bad epiphany that changed me, and reduced my naivete about the world and so-called pious people. This church that had victimized me as a child came back to hurt me in the most audacious of ways, ironically to escape its misdeeds against me and so many others.

I was elated, however, that I knew the truth of what was happening, and that all was a non-issue. I called Sabrina and Gaynor and told them what I had found out, and it was all done, or so I thought. By mid-afternoon, they called me back and asked me for an official comment. GPD spokesman AJ Balajadia, they told me, released a statement that indeed, a person filed a complaint at the Agat precinct against me.

I was livid. It was a nightmare. AJ said he was just doing what he was told to do. Oya said she was not informed GPD would be sending out that news release, and that they shouldn’t have. They couldn’t even officially give me the name of my accuser, because there was no actual criminal case.

I never understood what the big deal was about the Neo sect until that day. That was the day I learned how evil that organization is. And what was I supposed to do about it? What difference would it have made if I commented and told my story then?

Rather than fight, I called a guy I knew who did drugs, and I asked him to bring me a couple needles, and some meth. I started back on drugs so I could put the whole ordeal behind me and be at peace with every attack that came.

A few days later, I did break up with that boyfriend. I never saw him as someone who would do this, but when my retirement money came in and it hit our joint account a couple days later, he took most of it. I couldn’t start Candit anymore, at least not in September 2017.

So, I did drugs with people who were happy to supply me with dope. It didn’t take long for me to run out of money, so I asked Dennis Rodriguez to hire me in his senatorial office, and he did. Then, he decided to run for governor, and I was excited because I believed so much in him and I had experience to run his campaign. And then, a few months later, in April 2018, not content with the two prior attacks on me, the administration came after me again.

And that’s when I had enough.

All I wanted in early 2017, when I decided to leave politics and join the private sector, was to have a private and quiet life. Candit was not supposed to be a broadcast medium, but website that published stories exposing corruption, and no one was ever supposed to see my face. I just wanted to be left alone.

So much for that. I’m glad God placed me on the path that has led us here today. Johnnie Rosario, Carlos, and I got articles of incorporation together, and in August 2018, we started Kandit.

Today, our audience numbers close to 50,000 viewers and readers on multiple platforms. Today, I am able to tell this story and to defend other victims of the lies and conspiracies by the Neocatechumenal Way, such as Tim Rohr. That good man was falsely accused by the real predators of this island simply because he stood up to those bullies and worked for years to get the truth to all of us.

I bet the people who attacked us never thought they’d see the day thousands of people would read these words from my hand, and know that it is the bold, hard truth. I was supposed to be a discredited no one along their path to false theocracy.