A whistleblower from the Torres-Palacios 2018 transition committee submitted a report to Gov. Ralph Torres that, among other things, corroborates the allegations of sexual assault made by a female Department of Public Safety employee against commissioner Robert Guerrero. The report also states both Mr. Torres and Lt. Governor Arnold Palacios were personally aware of the allegations the woman made against Mr. Guerrero. Mr. Palacios, according to the report, directed the whistleblower to conduct an independent investigation.

The report, executed March 28, 2019, was submitted also to the Office of the Attorney General, secretary of public works and republican party chairman James Ada (transition committee chairman at the time), and to then-Sen. Sixto Igisomar. Mr. Igisomar held senate oversight of public safety, and despite knowledge of the details in this report, pushed through Mr. Guerrero’s confirmation as DPS commissioner.

In the report, which contains redactions of names of whistleblowers to protect them from retaliation by Mr. Guerrero and Mr. Torres, the main whistleblower detailed the accounts made by a woman, who filed a criminal complaint against Mr. Guerrero for allegedly sexually assaulting her. These accounts match the actual criminal complaint, which Kandit has twice published. No action has been taken by either the Office of Personnel Management, the OAG, or the governor’s office, where the complaint was filed in January 2019.

The whistleblower also reported that in December 2018 he personally informed then-Lieutenant Governor-elect Arnold Palacios about the woman’s allegations against Mr. Guerrero. Mr. Palacios, according to the whistleblower, told him to give his findings directly to him and Mr. Torres, and not to the transition committee.

“Mr. Palacios informed me to conduct an independent finding for him and Governor Torres and should not be turned to the overall Transition Committee,” the whistleblower stated in his report.

A week after the whistleblower’s conversation with Mr. Palacios, Greg Sablan, the chairman of the DPS transition team, told the whistleblower “that Commissioner Guerrero told him that I am no longer allowed to be in the area of DPS and that he will not entertain the committee if I was around.”

The whistleblower reported that he then called Mr. Palacios, who was off island at the time, “and told him about the incident informing him I will no loner be providing my service to their administration if the issue is not addressed.”

The issue, and others detailed in this report, never was addressed. The woman’s complaint has never been adjudicated.

“The independent investigation that Lt. Governor Palacios requested was never done by me because after what was done to me after I got kicked out from the committee,” the whistleblower told Kandit. “I never bother to pursue the investigation further. Lt. Gov. Palacios has tried to reach out to me after returning from his trip but I never answer his phone call knowing that the governor will never replace Robert Guerrero.” 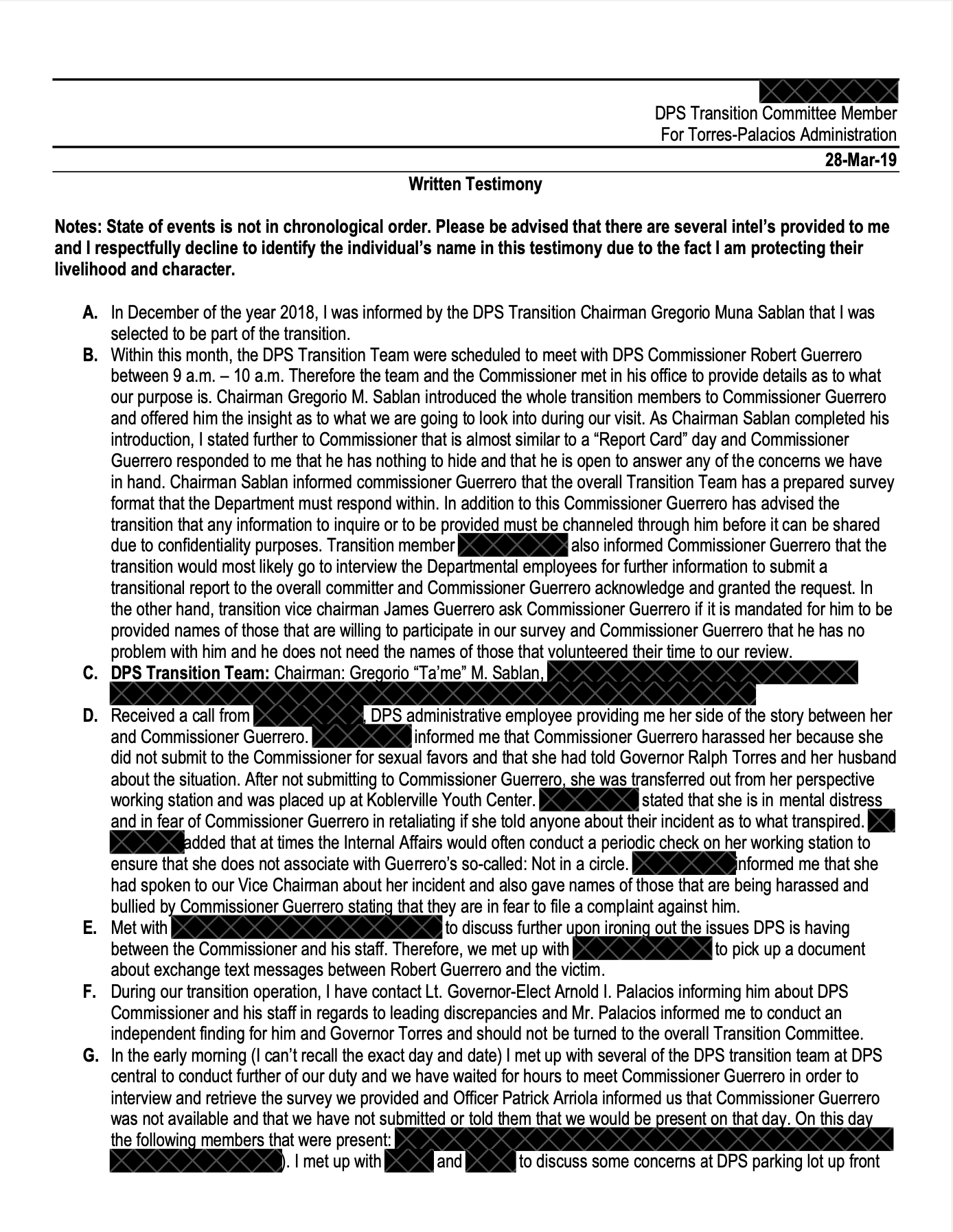 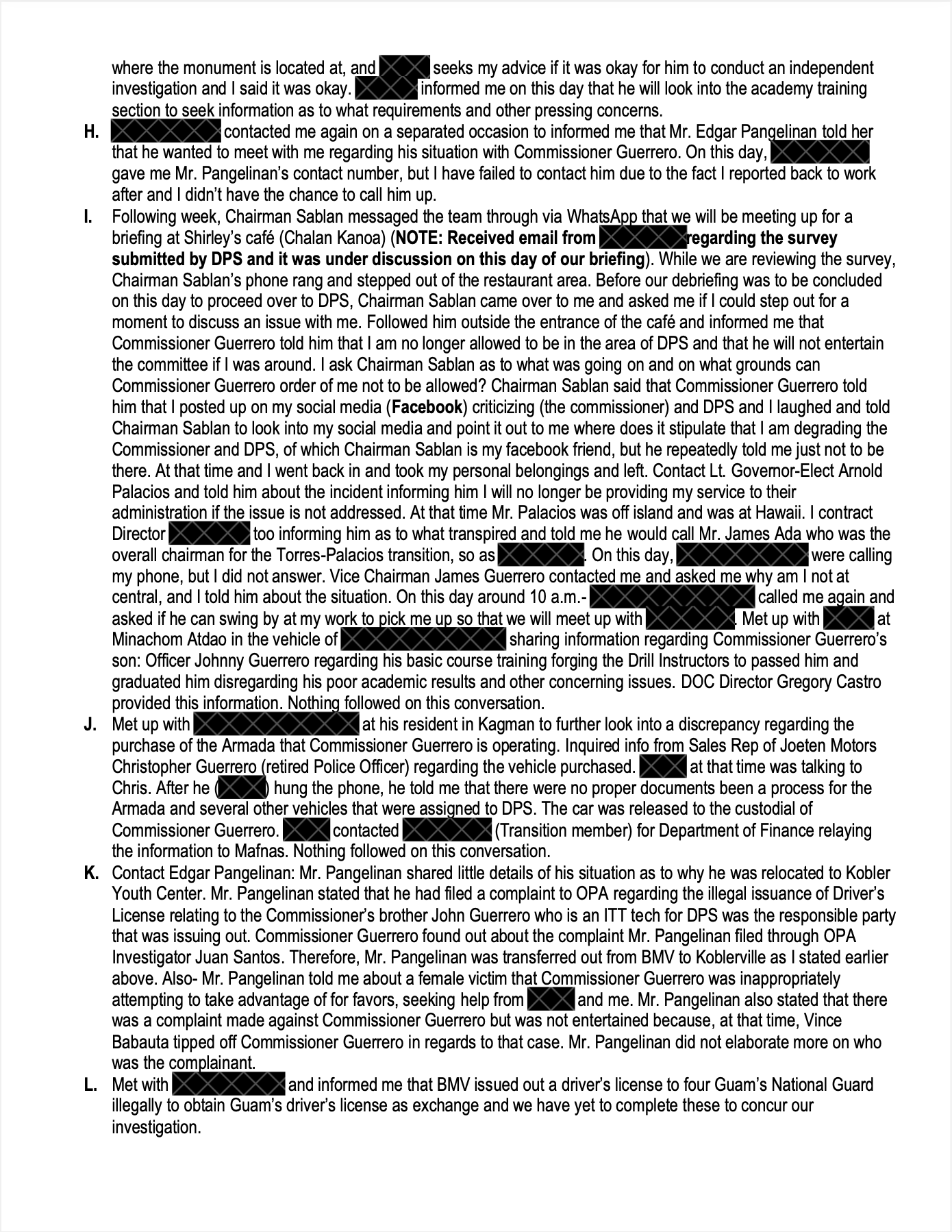 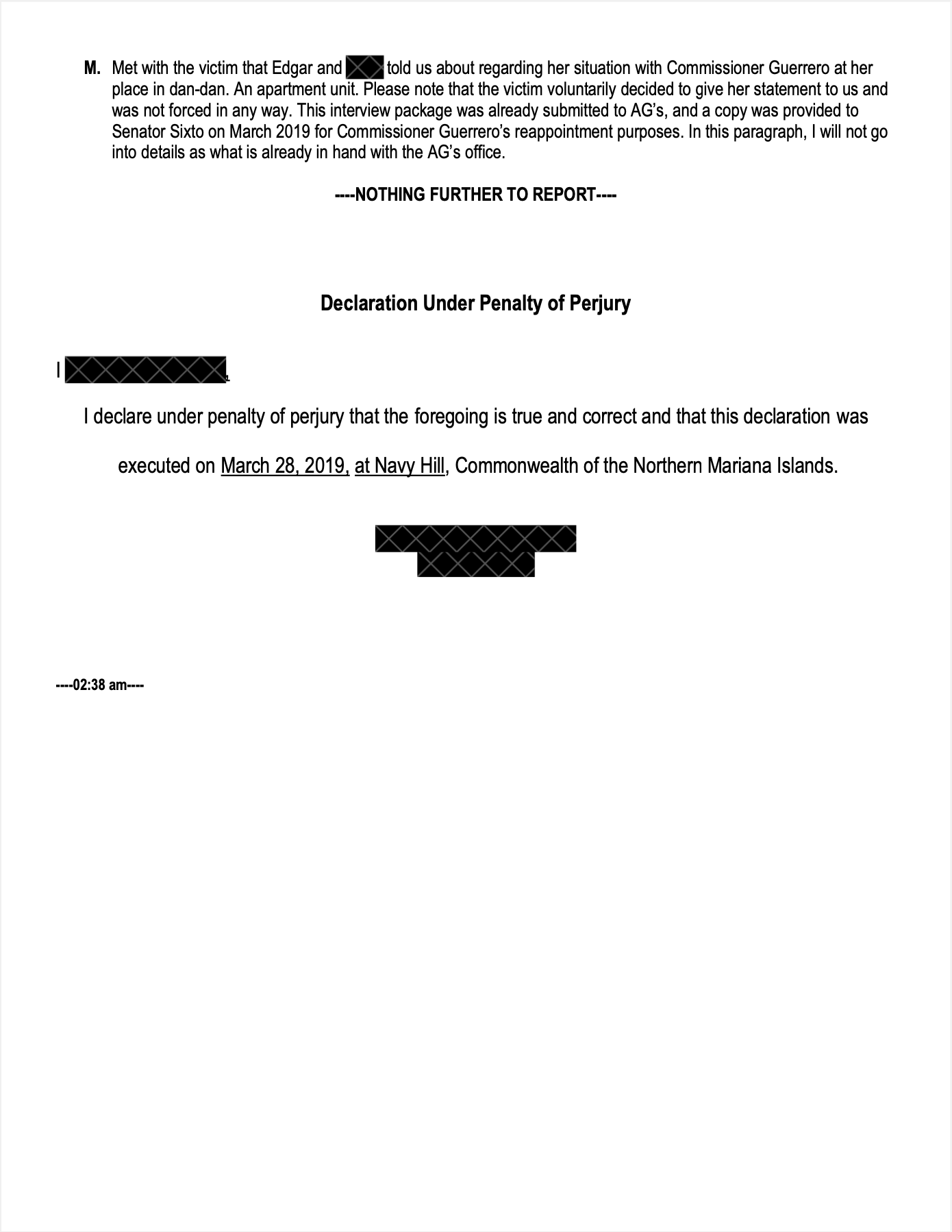